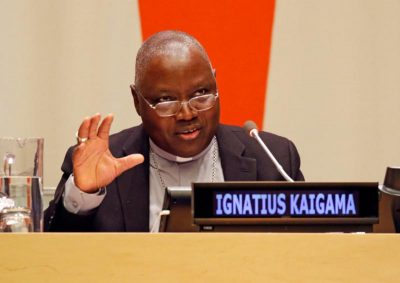 Archbishop Ignatius A. Kaigama of Jos, a former president of the Catholic Bishops’ Conference of Nigeria, gave examples from his archdiocese in the central part of the country.

In Jos, the bustling administrative capital of Plateau state, the archbishop established the Dialogue, Reconciliation and Peace Centre in 2011 to “attempt to narrow the gap between different groups that are hostile to each other,” he said.

It is a place where “Muslims and Christians walk together,” the archbishop told Catholic News Service in early March. The archbishop was in New York to speak at a March 1 panel at the United Nations, “International Religious Freedom,” organized by the Holy See Observer Mission to the U.N.

“I have lived through all different types of crisis. I didn’t want to wait for big solutions, but wanted to do something small,” Archbishop Kaigama told CNS. “It’s a safe space to talk to one another and a proactive center to forestall crisis and possible violence.”

“We bring in Muslim and Christian primary and secondary school students and train them together in peace education. We also bring in traditional grassroots leaders to encourage people to cultivate dialogue,” he said.

Of Nigeria’s 200 million people, 30 million are Catholic. The church “is an influential member of the Christian community because we tackle issues of spiritual, pastoral and social nature, speak on behalf of the people and are a voice of the voiceless,” Archbishop Kaigama said. “People are waiting for our words of encouragement and our challenge to those in authority.”

Other Nigerian Christian groups are Anglican, Lutheran, Methodist, Church of Christ and Pentecostal, the archbishop said. Christians and Muslims each make up approximately 40 percent of the population, and the balance adhere to traditional African religions.

In the predominantly Muslim northeast of the country, Boko Haram militants have killed more than 28,000 people and displaced at least 3.8 million people. They also use kidnapping and terrorism in their effort to establish the so-called Islamic State of West Africa Province. Violence is ongoing and is perpetrated by individuals and groups beyond Boko Haram.

In the north, Christians face discrimination and must keep a low profile to avoid harassment and attacks, Archbishop Kaigama said.

“Boko Haram began as a movement inspired by Yusuf Mohammed to promote the values of Islam, propagate what (the prophet) Muhammad stood for and purify practices that had been adulterated,” Archbishop Kaigama said. The “harmless ” movement to improve Islam became offensive, judgmental and militant in its preaching. Yusuf Mohammed was arrested and his death in a jail cell triggered a crisis of violence among his followers, the archbishop said. Christians were the were the first targets, then government organizations and Muslims were in the crosshairs.

St. Finbar, a church in the Archdiocese of Jos, was attacked by a Boko Haram suicide car bomber March 11, 2012. Fourteen parishioners were killed and the church roof caved in, but Archbishop Kaigama said, “The luck of fortune was that the bomber couldn’t get closer to the entrance of the church” because there were so many people there.

“Everyone goes to church on Sunday,” he said.

The government of Nigerian President Muhammadu Buhari contained much of Boko Haram’s activities to the northeastern part of the country, but violence continues and has become more sophisticated, Archbishop Kaigama said.

“We want to see the situation become better so people can move freely and Boko Haram will not attack worshippers,” he said. The United States and some European countries have provided military assistance to the Buhari government.

Archbishop Kaigama said he is impressed with the religious tolerance and acceptance in the predominantly Christian southern part of the country. He described seeing one Muslim governor at a Mass in a southern state.

“He knelt when we knelt and stood when we stood. I thought he was Catholic until he addressed the congregation at the end of Mass.”

“The governor’s wife was Catholic, and he didn’t keep her from being sacramental. That’s what you want: harmony,” Archbishop Kaigama said. Claiming that Islam forbids Muslims to marry Christians limits social interaction, he said.

In the days surrounding the Feb. 23 national election, Archbishop Kaigama said, he was asked to host a meeting of Muslim and Christian leaders at his home, “so the meeting would have more integrity. This is the fruit for me of what we are trying to do: We are not partisan. We are not judgmental. We are there for everyone.”

The archbishop’s visit to the United Nations and New York was sponsored by Aid to the Church in Need, an international aid organization that provides funds to the Archdiocese of Jos to train priests and catechists, build churches and rectories, and buy vehicles for priests, religious and catechists to reach parishioners.

NEXT: Dissenting sisters in Indian rape case say they are church outcasts