Cardinal Levada took U.S. experience with him to the Vatican 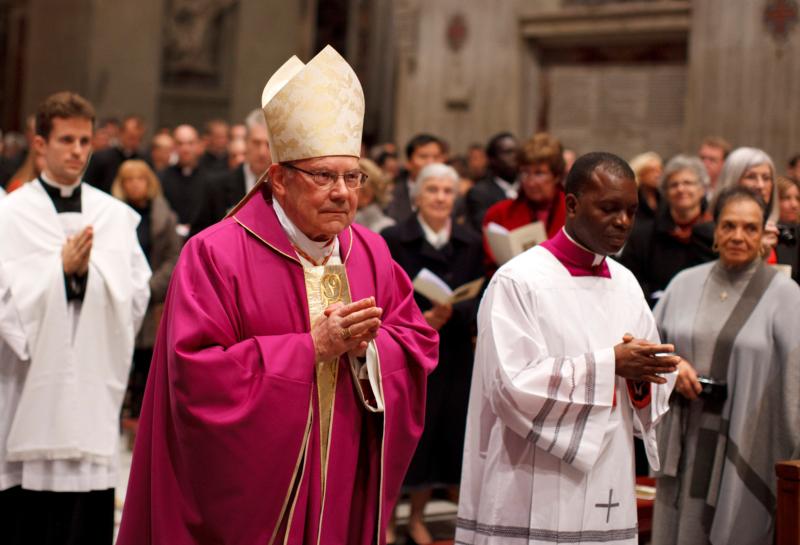 Cardinal William J. Levada, the former archbishop of San Francisco and of Portland, Ore., and the retired prefect for the Vatican Congregation for the Doctrine of the Faith, died in Rome Sept. 26, 2019, at age 83. He is is pictured in a Dec. 20, 2011, photo. (CNS photo/Paul Haring)

WASHINGTON (CNS) — U.S. Cardinal William J. Levada, who died Sept. 26 in Rome, is well-known as the retired head of the Vatican’s doctrinal congregation, but his experience leading major U.S. dioceses prepared him for this role.

“I firmly believe that what I have experienced in my ministry among God’s people here in the Archdiocese of San Francisco has been a great grace for me and has enriched me for the new service to the universal church to which our Holy Father, Pope Benedict, has called me now,” he said during a Mass attended by more than 3,000 people at the Cathedral of St. Mary of the Assumption in San Francisco, just before he left the archdiocese in 2005.

He also told the congregation that his 10 years as archbishop there had been “a significant part of my life as a man, a priest and a bishop.”

When Cardinal Joseph Ratzinger was elected Pope Benedict XVI in 2005, he named then-Archbishop Levada to replace him as head of the Congregation for the Doctrine of the Faith, the Vatican agency charged with protecting and promoting the church’s teachings on faith and morals. It was the first time a U.S. prelate had led the congregation.

The Vatican appointment did not come as a surprise to many of then-Archbishop Levada’s friends and fellow U.S. prelates at the time.

“As much as I enjoy his company, I am even more grateful for the good pastoral care he gave this local church. … He is a loyal churchman, a faithful disciple of the Lord and a man of integrity,” said the archbishop, who had known then-Archbishop Levada since 1958, when they met as seminary classmates at the North American College in Rome.

Retired Bishop William S. Skylstad of Spokane, Washington, then-president of the U.S. Conference of Catholic Bishops, said at the time that it was a great honor for Archbishop Levada to receive the appointment.

“He is also taking on a tremendous responsibility, but he is well-prepared for it intellectually and spiritually, as Pope Benedict XVI clearly recognizes in choosing him to be his successor at the congregation,” he said.

Before moving to Portland, for three years he served as an auxiliary bishop of Los Angeles, where earlier he had served as an associate pastor, teacher and campus ministry chaplain. He also served as secretary of the California Catholic Conference, a public policy agency of the state’s bishops.

In a 2005 interview with Catholic News Service, then-Archbishop Levada said his U.S. pastoral experience made him sympathetic to the doctrinal and teaching challenges faced by local bishops around the world.

As bishop, he helped write the “Catechism of the Catholic Church,” and he said formation in the faith was one area where universal and local churches could cooperate. And when he was archbishop of San Francisco, he was a key figure in the approval of new norms to handle cases of priestly sexual abuse.

In 2002, he was a member of the U.S.-Vatican commission that made final revisions to the norms, which laid out a strict policy on priestly sex abuse and provided for removal from ministry or laicization of priests who have sexually abused minors.

He also had experience with the pastoral side of another issue that had drawn increasing attention from the Vatican’s doctrinal congregation: same-sex marriage. He told a Synod of Bishops in 1997 that his own experience in San Francisco had taught him how easily dialogue can be overtaken by political pressure on this issue.

“The city’s human rights commission named me as contributing to a ‘climate’ of discrimination against homosexuals because I said public recognition should not be given to so-called ‘gay marriages,'” he said.

As archbishop he also opposed a city ordinance requiring all agencies contracting with the city to provide spousal benefits to domestic partners of their employees. Noncompliance could have jeopardized the church’s social service contracts with the city. The city of San Francisco changed the ordinance so that employees of church agencies could designate any legally domiciled member of their household for spousal benefits.

In 2004, Archbishop Levada helped lead a prayer rally for the defense and promotion of marriage after the city of San Francisco decided to issue same-sex marriage licenses.

San Francisco Archbishop Salvatore J. Cordileone said in a Sept. 26 statement announcing the cardinal’s death that he had known him “ever since he was my seminar moderator in my first year of theology. I always appreciated his guidance and to his commitment to the integrity of the church’s faith.”

Archbishop John C. Wester of Santa Fe, New Mexico, said: “The cardinal always gave of himself selflessly to the church that he loved so much, and he used all of his abilities in her service. The gift that always impressed me most was the gift of his heart. He had great compassion for the priests and people of the church.”

Cardinal Levada’s funeral was Sept. 27 in St. Peter’s Basilica. St. Mary’s Cathedral in San Francisco planned a memorial Mass, but no other details were announced immediately.

NEXT: CARA, America Media team up to produce video series on vocations