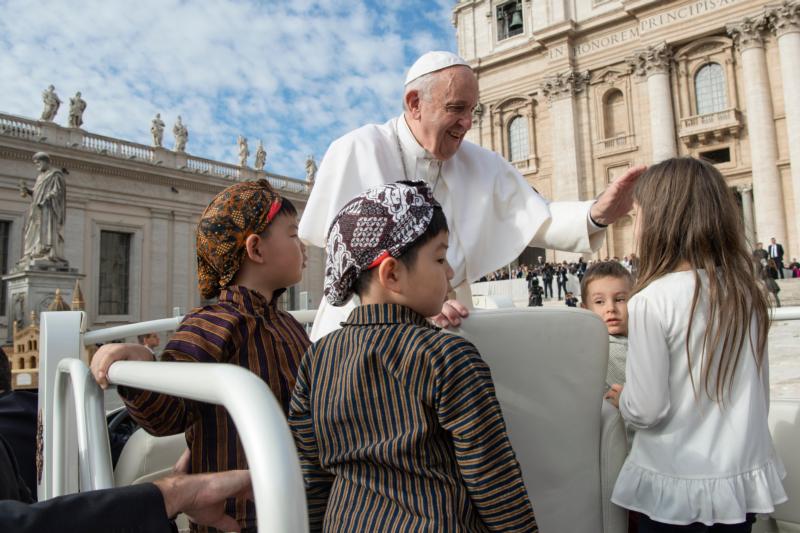 Children join Pope Francis in the popemobile during his general audience in St. Peter’s Square at the Vatican Sept. 25, 2019. (CNS photo/Vatican Media)

VATICAN CITY (CNS) — The act of bearing false witness to destroy someone is an attack against the body of the church, Pope Francis said.

Christians who engage in calumny are like those responsible for the martyrdom of St. Stephen; they chose “the pettiest solution to annihilate a human being: slander and false witness,” the pope said Sept. 25 during his weekly general audience.

“We know that calumny always kills,” he said. “This ‘diabolical cancer’ of calumny — born from a desire to destroy a person’s reputation — also assaults the rest of the ecclesial body and seriously damages it when, for petty interests or to cover their own faults, (people) unite to sully someone.”

The pope continued his series of talks on the Acts of the Apostles and reflected on the life and martyrdom of St. Stephen, one of seven deacons chosen by the apostles to serve the early Christian communities.

The ministry of the diaconate, he explained, was created by the apostles to serve the community through works of charity, and a person called to be a deacon is “the guardian of service in the church,” not “a second-rate priest.”

The harmony that existed between the apostles, who preached the word of God, and the deacons, who served through works of charity, is “the leaven that makes the ecclesial body grow,” he added.

When challenged by the religious establishment of his day, “Stephen doesn’t mince words, he speaks clearly. He says the truth,” the pope said.

Even facing death, he continued, St. Stephen “does not seek loopholes, he does not appeal to personalities who can save him but puts his life back into the hands of the Lord.”

St. Stephen, he said, “teaches us that it isn’t beautiful speeches that reveal our identity as children of God, but only in abandoning one’s life into the hands of the Father and forgiving those who offend can we see the quality of our faith.”

“The martyrs are not ‘plastic saints,’ but men and women of flesh and bone who — as the Book of Revelation says — ‘washed their clothes, making them white in the blood of the lamb.’ They are the true winners,” the pope said.

PREVIOUS: God loves, rescues even those in the ‘hell’ of addiction, pope says

NEXT: A day of visiting the unwelcome, and a call to give them hope