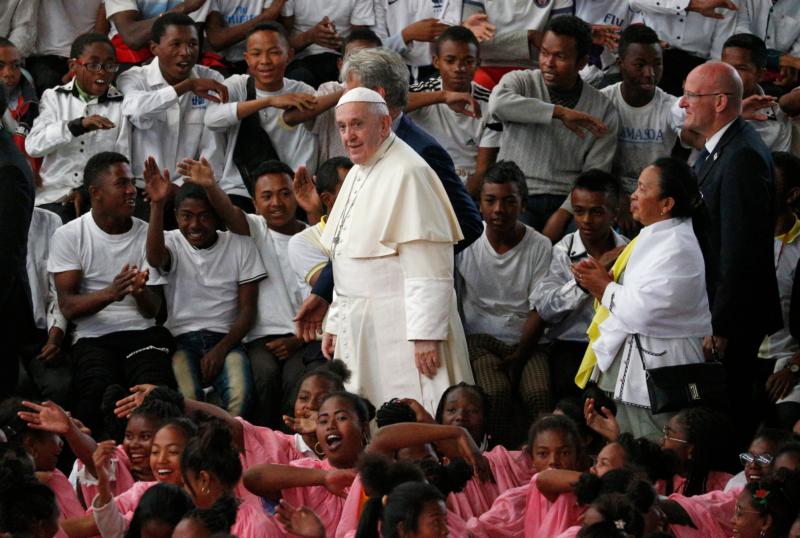 VATICAN CITY (CNS) — While Pope Francis’ comments on U.S. criticism of his papacy drew the biggest headlines during his visit to Africa, the Masses he celebrated in Mozambique, Madagascar and Mauritius drew the biggest crowds.

Dignitaries were chauffeured to the outdoor Mass sites, but most of the people arrived packed into old buses or after walking far on dusty roads. In Madagascar, many had spent a chilly night on straw mats or plastic tarps to be among the 1 million people authorities said were present for the morning Mass.

Pope Francis knew how the people lived, and his mission was to be with them as much as possible and show what the Gospel means in their situation. He was back to being the pastor he was when he ministered in the “villas miserias” in the poorest areas of Buenos Aires, Argentina.

The trip was bracketed by discussions flying to and from Africa about a new French book claiming a well-funded cabal of conservative U.S. Catholics wants Pope Francis out, and his reflections on the importance of listening to criticism if — and only if — it is offered in a spirit of dialogue.

In some ways, it was the “first-world problem” version of his constant call in Africa for loving one’s enemies, engaging in real dialogue and living the spirit of the Gospel in one’s own, concrete situation.

In Mozambique, where the effects of the civil war from 1977 to 1992 still boil over into sporadic violence, Pope Francis told the people that Jesus meant it when he said to love one’s enemies and pray for one’s persecutors.

“Jesus is no idealist, someone who ignores reality. He is talking about specific enemies, real enemies,” the pope said Sept. 6 during Mass in a Maputo stadium.

Peace and reconciliation take courage and won’t come from simply avoiding the people who were on the other side, he said. “Jesus commands us to show an active, impartial and extraordinary benevolence toward those who have hurt us” and “to bless them and to pray for them.”

“In other words, to speak of them with words of blessing, with words of life not death, to speak their names not in insult or revenge, but to establish a new bond which brings peace,” the pope said. “It is a high standard that the Master sets before us!”

In Madagascar, Pope Francis visited a former student of his, Vincentian Father Pedro Opeka, and the village he and thousands of the country’s poorest people — many former garbage pickers — built, largely from backbreaking work in a quarry up the hill.

Pope Francis told residents the village is “an expression of God’s presence in the midst of his people who are poor.”

While the village, Akamasoa, is a blessing, it also demonstrates that making a blessing or gift blossom and sharing it with others requires effort, the pope said. It shows the results of people being dedicated to “the values of hard work, discipline, honesty, self-respect and respect for others.”

Pope Francis’ words and actions highlighted his firm conviction that the Gospel has real-life applications, that faith involves much more than going to church on Sunday and that evangelization is not knocking on doors and handing out pamphlets.

Meeting priests, religious and seminarians in Antananarivo, Madagascar, Sept. 9, the pope said sharing the Gospel and fighting “the power of Satan” will take as many forms as there are human needs.

When done in the name of Jesus, he told them, “You triumph over evil whenever you teach people to praise our heavenly Father, or simply teach the Gospel and the catechism, or visit the sick and bring the consolation of reconciliation.

“In Jesus’ name, you triumph whenever you give a child something to eat or save a mother from despair at being alone in the face of everything, or provide work to the father of a family,” he continued. Teaching, protecting the environment, planting a tree, nursing the sick and bringing clean drinking water to a village are all signs of a “victory over evil.”

On the flight back to Rome, Pope Francis once again noted how some people accuse him of being a communist, even though, he said: “The social things I say are the same things John Paul II said. The very same. I copy him.”

In Mauritius, a development success story in Africa, the pope told government and civic leaders that steady economic growth is “a reason to rejoice, but also to be on guard” to make sure it benefits all the nation’s people.

“Promote an economic policy focused on people,” he said, particularly by working to achieve “a better division of income, the creation of jobs and the integral promotion of the poor.”

Naturally, his caution took a more explicitly religious note that morning when he celebrated Mass with tens of thousands of people gathered on a terraced hillside under a statue of Mary, Queen of Peace.

In addition to pleading for greater attention to the island’s young people — both within the church and in the job market — the pope warned about the possible negative effects of prosperity on missionary discipleship.

“It can happen that, as the church of Christ, we can yield to the temptation to lose our enthusiasm for evangelization by taking refuge in worldly securities that slowly but surely not only affect the mission but actually hamper it and prevent it from drawing people together,” he said.

Everywhere on his weeklong trip, Pope Francis showed how human concerns are the church’s concern, that no Catholic is exempt from the demands of the Gospel and that being Christians and being citizens are both calls to build community.

As he told an interreligious gathering of young people in Mozambique, living as people loved by God “has to do more with raising up than knocking down, with reconciling than forbidding, with offering new changes than condemning, with the future than the past.”