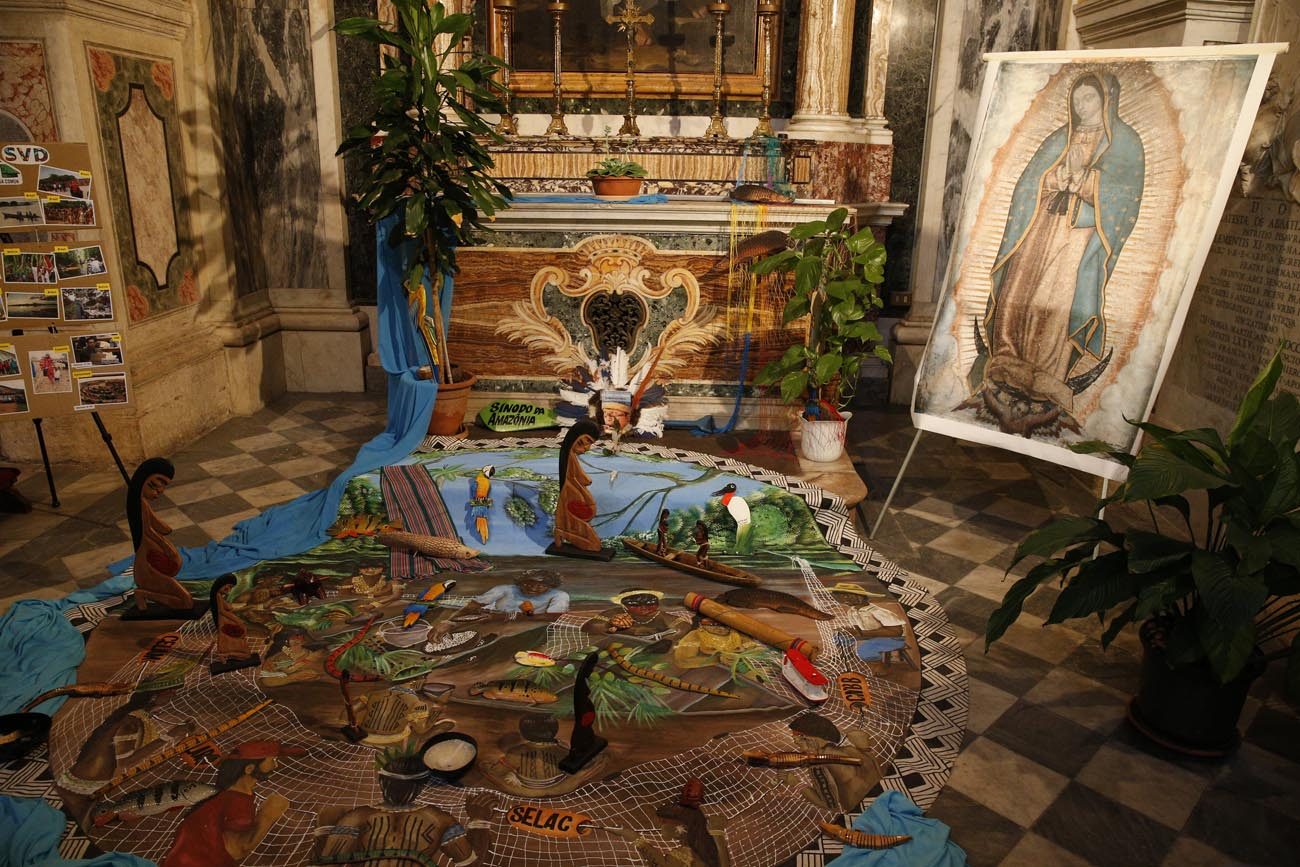 An image of Our Lady of Guadalupe is seen next to a display featuring indigenous people at the Church of Santa Maria in Traspontina in Rome Oct. 18, 2019. The church near the Vatican was hosting exhibits on the Amazon region during the Synod of Bishops for the Amazon. (CNS photo/Paul Haring)

VATICAN CITY (CNS) — Creating an Amazonian-rite liturgy and new ministries for laypeople, including the ordination of women deacons, are some of the recurring proposals made by small groups at the Synod of Bishops for the Amazon.

Such proposals, one group said, would increase as well as transform the Catholic Church’s presence in the Amazon, turning it from one of transience to one of permanence.

The group identified as Spanish-B noted differences of opinion. Some synod members, it said, proposed asking the pope for the “the possibility of conferring the priesthood on married men in the Amazon on an exceptional basis, under specific circumstances and for certain specific peoples, clearly establishing the reasons that justify it.”

However, the report continued, other members felt the topic should be dealt with in-depth at a synod specifically on the topic.

The 12 small-group reports, published by the Vatican Oct. 18, were the result of reflections in groups organized by language; each group summarized their members’ conclusions and offered proposals for the whole synod.

Most of the groups cited the presence of women as a “decisive factor in the life and mission of the church in the Amazon,” and one that must be recognized officially. Four of the groups explicitly called for the ordination of women deacons and three others said the church should study the possibility.

Recalling that the Second Vatican Council restored the permanent diaconate for men because “it was good and valuable to the church, we believe that the same argument is valid to create a diaconate for women in the church in the Amazon,” the Portuguese-B group said.

The Portuguese-C group, however, said the ordination of women deacons and of married “viri probati,” or men of proven virtue, “requires further development and study.”

One Italian group proposed that new, official ministries — such as “community coordinator” — be created for both men and women in line with St. Paul VI’s document on ministries, “Ministeria Quaedam” (“Some Ministries”).

The document, which was promulgated in 1972, reordered what were known as “minor orders” in the Catholic Church. The document opened the way for laypeople to be installed officially as lectors and acolytes, and it called for the institution of new ministries that might meet “modern needs.”

While some groups supported a proposal to confer priestly ordination on older married men so that more remote communities can have access to the sacraments, others expressed reservations or were divided on the issue.

One Italian group report said the idea of ordaining married men “could diminish the value of celibacy” or lessen the commitment of priests giving all for the mission. That group also suggested that a “universal synod” be held on the topic in order to receive the opinion of the whole church.

It is important to maintain the church’s missionary mandate and its zeal for promoting and strengthening vocations, the group added, urging bishops’ conferences around the world to support projects in the Amazon and send missionaries there, “even those who currently serve as priests in the north.”

Several working groups also supported the creation of an Amazonian-rite liturgy, which would incorporate symbols and gestures familiar to indigenous people while maintaining the essential elements of the Eucharist.

The Italian-B group, moderated by Cardinal Luis F. Ladaria Ferrer, prefect of the Congregation for the Doctrine of the Faith, supported the creation of an “Amazonian Rite,” which would express the “liturgical, theological, disciplinary and spiritual” aspects that are part of the heritage of the people of the Amazon.

“There are about 23 different rites in the Catholic Church — an evident sign of a tradition that from the first centuries tried to inculturate the contents of faith and their celebration through a language that would be the most congruent possible with the mystery being expressed,” the group said in its report.

The rite also would enrich evangelization efforts, it said, by expressing the faith according to the different characteristics of each culture.

Synod groups also reflected on the struggles that indigenous communities in the Amazon face, including the steady rise of violence against women and young people due to sexual exploitation, institutionalized violence and drug trafficking.

“Faced with this reality of blood, the church proposes to encourage reporting allegations by giving support to women,” the Portuguese-A group said. It also proposed the church be included in creating public policy and “a human rights observatory” in the Amazon.

Most groups also proposed that the church be more involved in efforts to curb climate change.

The Spanish-A group highlighted the need for an “integral ecological conversion” that “leads the church to take on its prophetic role in denouncing injustices against indigenous communities and the destruction of parts of the Amazonian territories.”

However, the combined English and French group said that while the church must be prophetic in calling out governments and institutions that destroy indigenous communities and the environment, it also must not forget its first calling.

“We are not Greenpeace; we are the church,” the report said. “Our task is to bring Jesus our savior to the people.”

“We do this,” the group said, “by being with the people, listening to them, healing their wounds, expelling demons, giving witness to the power of Jesus’ salvation, sowing and sharing the word of life.”

NEXT: Women’s role in Amazon church does not depend on diaconate, sisters say