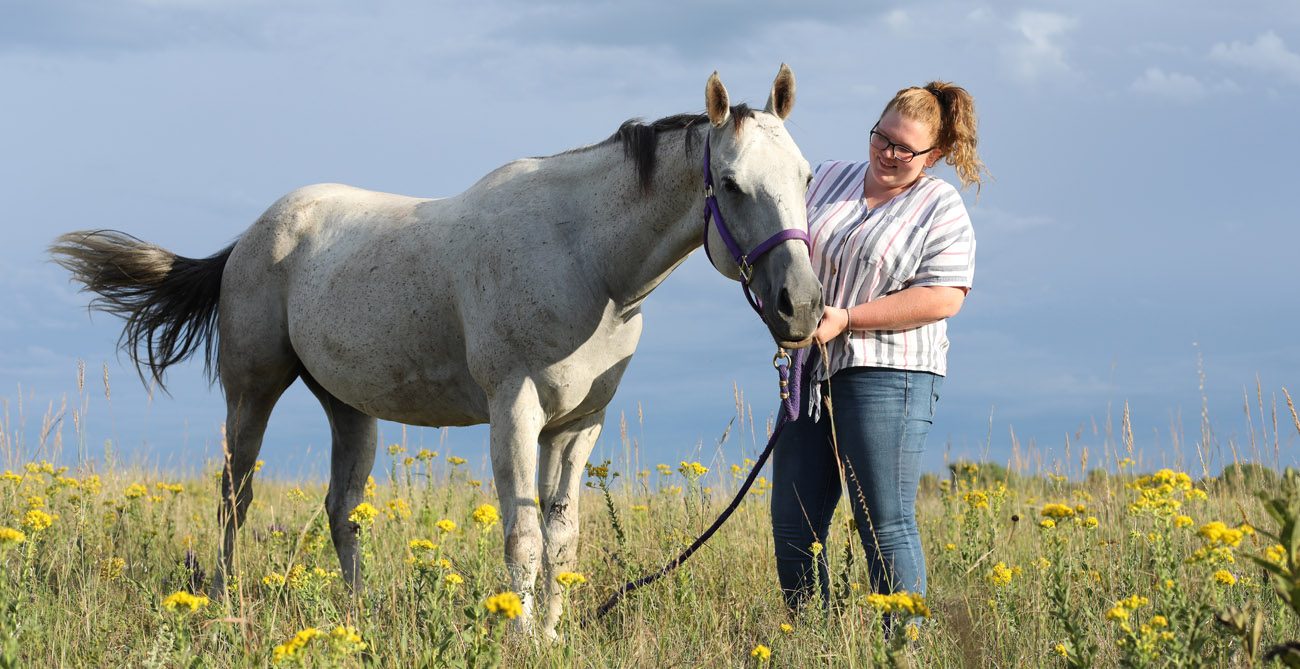 Jordyn works with Dakota, a grey Appaloosa horse, at the Warrior’s Ranch in Chapman, Kan., Sept. 12, 2019. The ranch was founded to provide outdoor experiences for veterans and teenagers who struggle with suicidal thoughts or have attempted suicide. According to the Centers for Disease Control, suicide is the second leading cause of death for youth ages 10-24. Jordyn’s name was withheld to protect her privacy. (CNS photo/Karen Bonar, The Register)

CHAPMAN, Kan. (CNS) — Rhythmically, the song of the crickets rises and falls across the rolling hills. Soft clouds float through the sky as rays from the setting sun dance across yellow butterweed flowers.

Jordyn slowly uses a brush along the length Dakota’s neck at Warrior’s Ranch.

“The horses take your emotions. It’s a different type of stress relief,” she said. “Instead of yelling or being angry, if I work with a horse and hang out, it helps me be calm.”

She tries to visit the Warrior’s Ranch weekly as an opportunity to work through struggles.

“It’s hands-on therapy,” said Jordyn’s mom, Kris. “She seems more relaxed afterward. The animals aren’t judging. She can see the progress. She can enjoy the rewards.”

Warrior’s Ranch was founded to provide outdoor experiences for veterans and teenagers who struggle with suicidal thoughts or have attempted suicide.

Was it due, in part, to being bullied?

“Yes,” Jordyn said. “I took a whole bunch of pills because I was done with everyone, done with all the drama.”

She and her mother told their story to The Register, newspaper of the Diocese of Salina. (Their last names were withheld to protect their privacy.)

Kris said she knew her daughter, who once had a bubbly personality, struggled with depression. She never realized, however, how deep the hurt was.

“It caught me out of the blue,” Kris said of her daughter’s suicide attempt during her freshman year of high school. “I knew she was upset and I knew kids were bothering her, but she never would tattle or say specifics. I never realized how deep it had gotten to her.”

Jordyn said she blocks out most of the memories surrounding the days leading up to her suicide attempt. The attempt led to more intense therapy.

Returning to school following the attempt was a different kind of struggle.

“People who (previously told me they didn’t like me) acted so fake,” she said. “When we were in public, they were friendly, but when I would text them later, they would ignore me.

“There are a select few friends who have shown their support.”

Bullying was something Jordyn experienced from a young age.

Kris explained Jordyn was born with the anterior bowing of her right tibia, meaning one leg was significantly shorter than the other.

“Kids would make fun of her because they didn’t know how to process seeing someone different,” Kris said. “She would wobble or wouldn’t be as fast running, even though she was giving it a 100 percent effort.”

At age 3, Jordyn had the first surgery to help lengthen her leg; she’d have 14 surgeries to stretch her bone by eight inches.

Due to surgeries, Jordyn missed school regularly. She spent 10 days in the hospital for surgery and would have to return to St. Louis for weekly follow-up appointments.

“She didn’t develop a lot of friends because she was always at appointments and in pain,” Kris said.

During grade school, Jordyn would get teased on the playground.

“One time, the school secretary called. She watched the boys pick on her by throwing rocks,” Kris said. “Jordyn’s problem was always not tattling. She didn’t want to be a tattletale.”

By middle school, Kris said, it was important to her Jordyn have regular counseling sessions, though “it was hard to find counselors to take someone that age.”

Throughout school, Jordyn said she struggled with feeling excluded.

“I’m used to it, but it still hurts when I have to try hard to get someone’s attention, and I know they’re ignoring me because they don’t like me,” she said. “It hurts because I’m a people person.”

It’s not simply being ignored, though.

“I scroll through social media and see they’re having a fun time,” Jordyn said. “I don’t get invited to bonfires. I feel excluded.”

Social media creates a host of other complications, including teens who create fake accounts to say malicious things.

“I’ve seen some of the messages teens send other teens,” said Jodi Mason, the founder of Warrior’s Ranch. “Kids who are 14 or 15 will say, ‘You’re worthless, everyone wants you to die.’ It’s something I would never imagine. Who would ever think to say stuff like that?”

Talking about a deeply personal and often private experience, such as suicide, in a public platform is something Kris describes as “scary.”

“Jordyn wants to tell her story and help others,” Kris said. “As a mom, I want to support Jordyn. It’s scary because kids are cruel. What if some kid reads it and starts to make fun of her?”

Talking openly and candidly about her struggles and suicide attempt is something Jordyn said is important to her.

“Bullying is going to get bigger and bigger,” she said. “It will get to the point where it’s the natural thing to do.”

As a parent, walking with a child through the aftermath of a suicide attempt is difficult, Kris said.

“Take it one day at a time,” she advised. “Kids get angry at the ones they love the most. You have to step back and remember it may be the illness or depression. Don’t take it to heart. Still say, ‘I love you.’ Still try to talk to them, even if they don’t want to talk to you.”

“If you have to take them (to counseling) every day, do it,” Kris said. “They may not like it, but one day they will look back and know you cared enough to take time out of your day to help.

“I hope that more parents reach out to each other. I’m glad to see more awareness and stories and real happenings coming out, instead of just trying to hide (the topic of suicide).”

From a teen’s perspective, Jordyn said she thinks counseling is important, but not necessarily easy.

“Counselors know everything about us, but we know nothing about them,” she said. “You want someone who can relate to you on a personal level.”

Which is why Kris said she feels like the Warrior’s Ranch is so important.

“Working with the horses in nature is more about learning about yourself,” she said. “Learning what can you do to help calm your triggers or panic attacks. If Jordyn knows how to calm herself, it is probably beneficial, especially if you can’t get in immediately (to see your counselor).”

“These animals are helping Jordyn,” Kris added, “and she is helping the animals.”