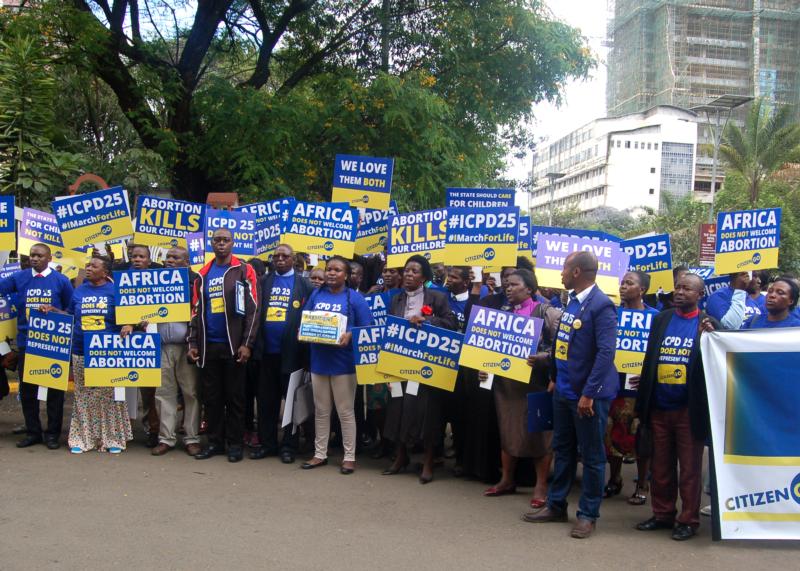 NAIROBI, Kenya (CNS) — Although an international summit on health rights for women and girls is being held in their country, Kenyan bishops said they were concerned it was a ploy to introduce ideologies and practices seen as contrary to Africa cultures and their religious heritage.

The Nairobi Summit on ICPD25, scheduled Nov. 12-14, marks the 25th anniversary of the International Conference on Population and Development in Cairo in 1994. The summit has been organized by the governments of Kenya and Denmark and the U.N. Population Fund.

“We view this agenda as an intent to corrupt our youth and enslave them to foreign ideologies, for example, same-sex union and active homosexual activities,” said Archbishop Philip Anyolo, chairman of the Kenya Conference of Catholic Bishops. In a news conference Nov. 8, he said he would have expected the summit “to focus on a program that targets actions that will uplift women and children living in extreme poverty, migration, strategies for development, literacy and education, encouraging the culture of peace.”

Kenyan President Uhuru Kenyatta also expressed reservations about some of the summit topics, issues he said he feared would destabilize family values and undermine the people’s cultural heritage.

“We will not take wholesome everything that comes with the conference,” he warned Nov. 8. “We will end what we think discriminates against our fellow citizens but reject totally what is against our culture and morals.”

On Nov. 11, some priests joined other citizens demonstrating in Nairobi streets demanding a boycott of the summit. The demonstrators took to Kenyatta 80,000 signatures of a petition urging the president and Kenyans to reject the summit.

“Say no to ICPD! No to homosexuality! We call for protection of babies. Life begins at the conception,” shouted the protesters. “Abortionists are just like terrorists. They kill our children.”

At the demonstration, Dr. Stephen Karanja, a gynecologist who is chairman of Kenya Catholic Doctors Association, described the summit as a big tragedy.

“We are not for sale. No matter how much money they pour into this. We shall not accept what they are proposing … our morality must be respected,” said Karanja.

In late October, the Vatican — which attended the Cairo conference — told the government of Kenya that it would not participate in the summit.

“The organizers’ decision … to focus the conference on a few controversial and divisive issues that do not enjoy international consensus and that do not reflect accurately the broader population and development agenda outlined by the ICPD is regrettable,” said the Vatican statement.

The U.N. Population Fund estimates 232 million women worldwide want to prevent pregnancy but are not using modern contraception. Each day, more than 800 women die from preventable causes during pregnancy and childbirth, and 33,000 girls are forced into marriage. And every year, more than 4 million girls are subjected to female genital mutilation.

“In 1994 at the ICPD, we imagined a world where one day, no woman would die giving birth, where no woman would be at risk of unintended pregnancy, and no girl would be denied her right to make a safe and healthy transition through adolescence and adulthood,” said Ib Petersen, Denmark’s special envoy to the summit. “The world we imagined is now within reach, but we must join forces to make it a reality once and for all.”

NEXT: Bolivian bishops say Morales’ resignation was not a coup