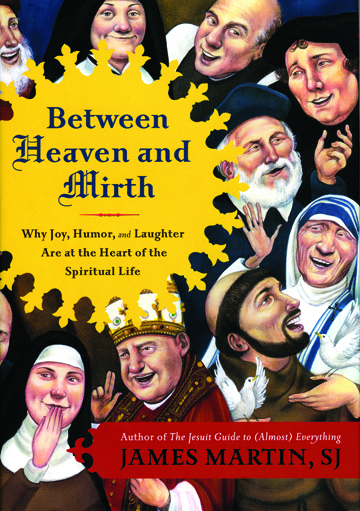 The old Baltimore Catechism set us straight right off the bat in first grade. The answer to question number four: “God made me to know Him, to love Him and to serve Him in this world and to be happy with Him forever in heaven.” In plain words, life is serious stuff; the happiness comes later.

Not all the saints would agree with this interpretation, and would argue life can and should be joyful in this world too.

Jesuit Father James Martin makes that case in his recently released “Between Heaven and Mirth: Why Joy, Humor, and Laughter Are at the Heart of the Spiritual Life” (Harper One $25.99)

Father Martin (who attended public school) quotes today’s Catechism of the Catholic Church which tells us wisdom “provides reasons for joy and humor even in the midst of a very hard life.”

Did Jesus have a sense of humor?

“Although the Gospels clearly show Jesus as clever and articulate, especially when it comes to His parables, there are few moments in the New Testament that strikes modern-day readers as laugh-out-loud funny,” Father Martin admits.

One of the things some biblical experts suggest is that events that might not seem funny to us would seem funny to Jesus’ contemporaries. That would be almost impossible to prove and may be a stretch.

And in fact the Gospels do give a hint that Jesus was a joyful person, none better than choosing the changing of water into wine as His first public miracle, and as Father Martin treats at length, the humorous story of poor little Zacchaeus, who had to climb a tree to see Jesus.

Most of the saints quoted in the book are absolutely joyful people. There are exceptions of course, for example St. Benedict who urged, “Prefer moderation in speech and speak no foolish chatter, nothing just to provoke laughter; do not love immoderate or boisterous laughter.”

More than counterbalancing this are the prelates and saints who look upon the sunny side of life.

For example, there is St. Teresa of Avila, the 16th-century Carmelite and reformer who said, “A sad nun is a bad nun,” and of course there is John XXIII whom Father Martin calls his “avatar of holy humor.” Once when a flustered nun introduced herself to him as “superior of the Holy Spirit,” he replied, “Well, I must say you are lucky, I’m only the Vicar of Christ.”

In another example, Blessed Teresa of Calcutta, when a sister asked what she should do to be a saint, advised, “Die now, the pope is canonizing everyone.”

One should not “ignore the reality of suffering and sadness,” Father Martin tells us. “But too many people religious overemphasize these aspects of life while downplaying the more mirthful ones.”

His book, he writes, “has tried to balance things out a bit. Joy, humor and laughter are virtues necessary for a healthy spiritual life.”