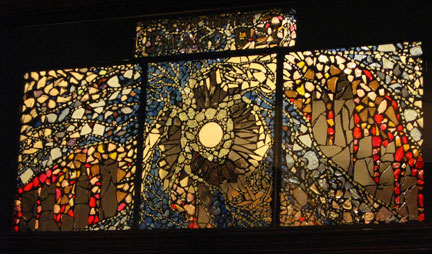 Anja Eltgroth sat in dim candlelight and held up the rosary she created out of abandoned roses.

“This is the beginning of the Imago Arts studio,” she said. “This rosary is a symbol of how Christ can take anything and make of it something more beautiful than we can imagine.”

Discarded Valentine’s Day roses make up the Hail Mary beads, and the glass behind the Sacred and Immaculate Heart centerpiece is from a broken car window.

“Brokenness into beauty” is the inspiration behind Imago Arts, an emerging urban studio with a mission of bringing hope, healing and unity through the arts. The studio is located in the basement of Grace House, a Catholic women’s community house located in the Port Richmond section of Philadelphia.

Eltgroth had recently started her job as music director at Temple University’s Newman Center when she found the roses outside on Broad Street; at the time, she desperately “wanted out of the city, the suffering and trash.”

“I thought I had to leave to be with Christ,” Eltgroth said. “Yet, in the midst of this mess, I had missed Him. He was there — much closer than I thought He was.”

Her volunteer service with AmeriCorps, and work at Our Mother of Consolation School in Chestnut Hill and La Salle Academy in North Philadelphia, further prepared Eltgroth for her mission.

“Three years of teaching kids in the city had a huge influence on my artwork,” she said. “I saw what God was doing in them despite broken situations… I wouldn’t be able to function in what many of them were going through, but they were still functioning and loving.”

During her rosary project and flowing from it, other pieces arose. Her friend Andy Coval’s broken car window — which she used in the rosary — became the main material in “Cor Mundi Imago Dei” (“Heart of the World, Image of God”), a large stained glass mosaic window. The eucharistic Sacred Heart image with veins connected to Philadelphia’s skyline is installed over the doorway of St. Paul’s House, a Catholic men’s community house in Port Richmond, where Andy resided.

“I guess he thought an old Corolla with missing hubcaps might be hiding a treasure inside,” Andy wrote of the vandal. “Now, with a black trash bag covering its window and a pane of glass shattered inside, I had removed all doubt…or so I thought.”

Eltgroth created various pieces for Grace House as well, including a mosaic that her housemates helped design and complete.

“Heart of a Mother and Child” mosaic was made for the Philadelphia-area Baby’s Breath Crisis Pregnancy Center, and Imago Arts recently turned barn windows into chapel mosaics at Camp Oak Hill Retreat Center near Lancaster County.

“The most unique part about it was that she wanted to use materials that were from the camp… dishes from the kitchen, stones and pebbles from the creek, and sand by the creek-side,” said Rebekah Ashburn, Camp Oak Hill retreat coordinator.

Eltgroth was recently a featured artist at Catholic Underground in Somerville, N.J., and she hopes to grace Philadelphia’s Cathedral-based coffeehouse, as well as other venues in the future.

Her photo-poetry book “Christ in the City: Heart Speaks to Heart” is available along with her artwork at www.imagoarts.net

NEXT: Archbishop’s new book sees ‘the next America’