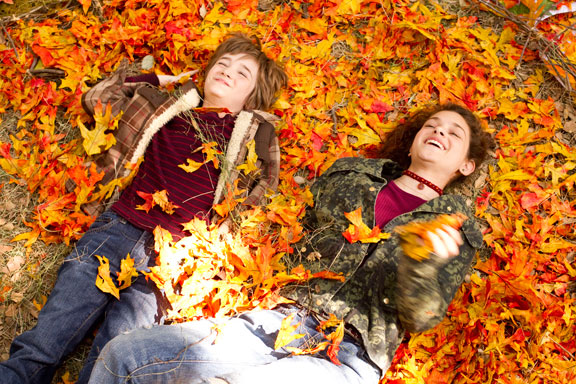 CJ Adams and Odeya Rush star in a scene from the movie "The Odd Life of Timothy Green.

NEW YORK (CNS) — The first thing to understand about “The Odd Life of Timothy Green” (Disney) is that, despite its genuinely wholesome approach, its themes of infertility and death make it unsuitable for younger children.

The film strains not to offend. But even older children may find parts of this fable — in which the enchanted 10-year-old boy of the title (CJ Adams) passes through life leading others by cheerfulness and good example — somewhat puzzling.

Let’s put it this way: This film has “Discuss it with your child afterward” written into nearly every scene. There’s nothing contrary to, or derogatory of, Christian faith. But there’s a mishmash of imagery, since the original story by Ahmet Zappa draws on both Christian and wiccan beliefs — a little too heavily on the wiccan, it must be said, for the comfort of many viewers of faith.

However, there’s no indoctrination going on. There’s just a lot to think about. And, on the upside, from start to finish, the story celebrates familial love.

Opening scenes show Jim and Cindy Green (Joel Edgerton and Jennifer Garner) at an adoption agency explaining why they’re qualified to become parents. To do so, they first have to explain what has just happened to them, which is where Timothy Green comes in.

Deeply saddened to learn they were infertile, the Greens wrote down all of their ideas about what the perfect child ought to be: Honest to a fault, able to love and be loved, possessing a lively sense of humor, and so on. They then buried the notes in a wooden box in their backyard garden.

That night, there was a heavy rainstorm, and the next morning, the couple discovered a precocious, dirt-covered naked boy, freshly sprung from their garden, exploring their house.

He’s just what they hoped to have, except that he has what looks like vine leaves on his shins. (This is the wiccan imagery.) These leaves cannot be cut off.

No problem there: They simply advise him to keep his socks on at all times. And they begin the process of becoming involved and dedicated parents.

Timothy is extremely kind, very patient, very much an outsider among other children and endures suffering in a Christ-like way (thus the Christian analogy).

He is smitten with Joni Jerome (Odeya Rush), a slightly older girl who also feels like an outsider because of a large birthmark. Together, they construct a sort of chapel in the woods with “stained glass” made from colorful autumn leaves (This is the mixed aspect).

Later on, in classic Hollywood style, Timothy comes up with a way to keep the town’s pencil factory — at which his father is a foreman — from closing.

It’s not a spoiler to disclose that, with the arrival of autumn, Timothy finds that his leaves are deciduous, and knows his time is drawing short. Yet it’s made clear that his life has had a purpose.

Writer-director Peter Hedges has a little trouble keeping his sentimental tale on an even keel. The uplifting, break-out-the-hankies ending, though, is likely to appeal to anyone who enjoys a good cry.

The film contains mature themes, some pagan overtones and a single scatological reference. The Catholic News Service classification is A-II — adults and adolescents. The Motion Picture Association of America rating is PG — parental guidance suggested. Some material may not be suitable for children.

PREVIOUS: ‘The Campaign’ takes politics down an even lower road

NEXT: Three views of a Good Book: new books unpack richness of the Bible