DNC forum explores: Can you be a Democrat and be pro-life? 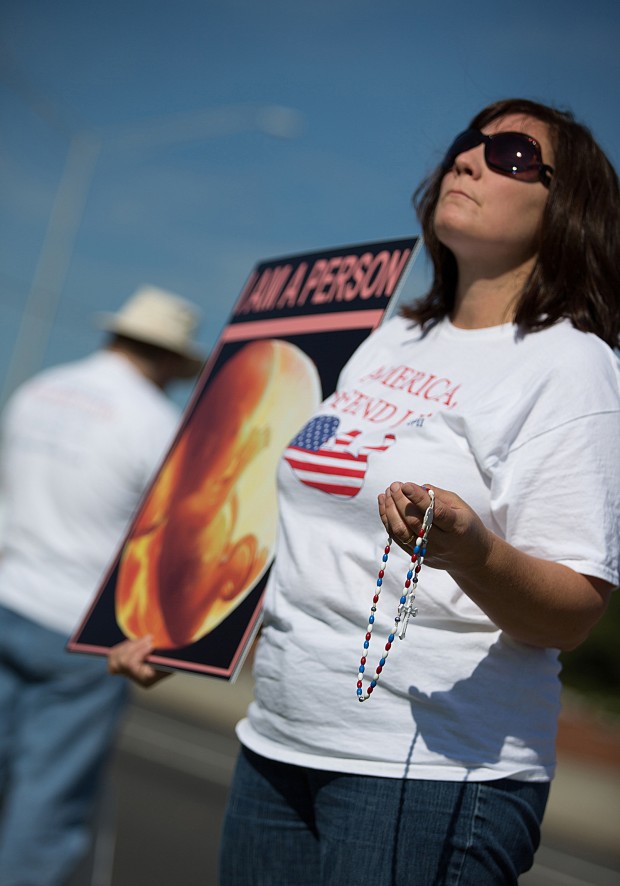 A woman from the pro-life grassroots organization America, Defend Life! prays the rosary during a demonstration outside a Planned Parenthood center in Charlotte, N.C., Sept. 1. Cecile Richards, president of Planned Parenthood Action Fund, and Nancy Keenan, president of NARAL Pro-Choice America, were among the scheduled speakers at the 2012 Democratic National Convention being held in Charlotte Sept. 4-6. (CNS photo/Anthony Perlas, Catholic News Herald)

CHARLOTTE, N.C. (CNS) — Buttons were available at the Democrats for Life of America forum Sept. 4 during the 2012 Democratic National Convention in Charlotte.

“Do We Count?” the button asks. The forum was an effort by pro-life Democrats to examine the question: “Can you be pro-life in a pro-choice party?”

The answer to both questions was mixed.

The view of many of the presenters was that there is significant room to make a dent in the Democratic Party’s staunch position in favor of keeping abortion legal. That is in spite of Democrats for Life’s recent failure to get the party to change its unequivocal support for abortion on demand in the 2012 platform.

Democrats for Life members said they also believe that much of what does get done on the abortion issue happens not because of pro-abortion rights Democrats or pro-life Republicans. Pro-life Democrats in Congress, they say, have been the key leaders.

Kathy Dahlkemper, a former member of the U.S. House from Pennsylvania, put it bluntly: Both Republicans and some of the more active pro-life groups are afraid of pro-life Democrats.

Dahlkemper said she lost her seat to a pro-life Republican. But she also said the Democratic Party and its major fundraisers on the abortion issue do not fully support pro-life Democrats. Planned Parenthood and NARAL Pro-Choice America also make sure that pro-life Democrats face opposition in primary races, she said.

Leaders of both Planned Parenthood and NARAL have been strong supporters of the Democratic Party for years, and at the Democratic National Convention they were scheduled for prime speaking slots.

But, Democrats for Life speakers also noted, the Republicans controlled the House, the Senate and the White House in the early 2000s and yet did not propose any legislation to end abortion.

“Nothing,” Dahlkemper said. If the Republicans truly wanted a “sanctity of life” amendment, as they have proposed previously, they did nothing about it when they had their chance in Congress, she said.

“I fear we haven’t done enough to get our message out,” Dahlkemper said.

Kristen Day, executive director of Democrats for Life of America, which sponsored the forum, agreed. She said when her group set up at the last March for Life in Washington, they were swamped by many pro-life supporters — many of whom were young people who said they didn’t know such a group existed.

The proposed language acknowledged that Democrats have “deeply held and sometimes differing positions on issues of personal conscience, like abortion and the death penalty” but said all are welcome in the party.

“We believe that we can reduce the number of abortions because we are united in our support for policies that assist families who find themselves in crisis or unplanned pregnancies,” the proposal said. “We believe that women deserve to have a breadth of options available as they face pregnancy: including, among others, support and resources needed to handle the challenges of pregnancy, adoption and parenthood; access to education, health care, child care; and appropriate child support.”

But not even this language was acceptable to the platform committee, which included advice from NARAL’s Nancy Keenan, Day said.

The language that stayed in the document was that of the 2008 platform “with one more sentence added to make it more pro-choice,” Day noted.

Being pro-life in a pro-choice party, said Dahlkemper, can be a lonely place.

“Some Democrats wish we would just go away,” she said.

Both she and former Rep. Bart Stupak of Michigan, who retired in 2011, said the Democrats will not achieve a majority in Congress without enlisting pro-life Democrats — a point Day has echoed repeatedly in her lobbying work with Democrats for Life.

But not all members of that group are as hopeful.

Eva Richey, head of the North Carolina chapter of Democrats for Life of America, said she is voting for Republican presidential candidate Mitt Romney. There are 21 million Democrats who identify themselves as pro-life, she said, and the party’s refusal to budge on its pro-abortion stance leaves pro-lifers like her out in the cold.

The Democratic Party is supposed to be a big tent with room for all, she said, but a better analogy would be that it’s a bus. “And we’re in the back of it,” Richey said.

Guilfoyle writes for the Catholic News Herald in Charlotte.

NEXT: Bishop Finn convicted on one charge of failure to report abuse