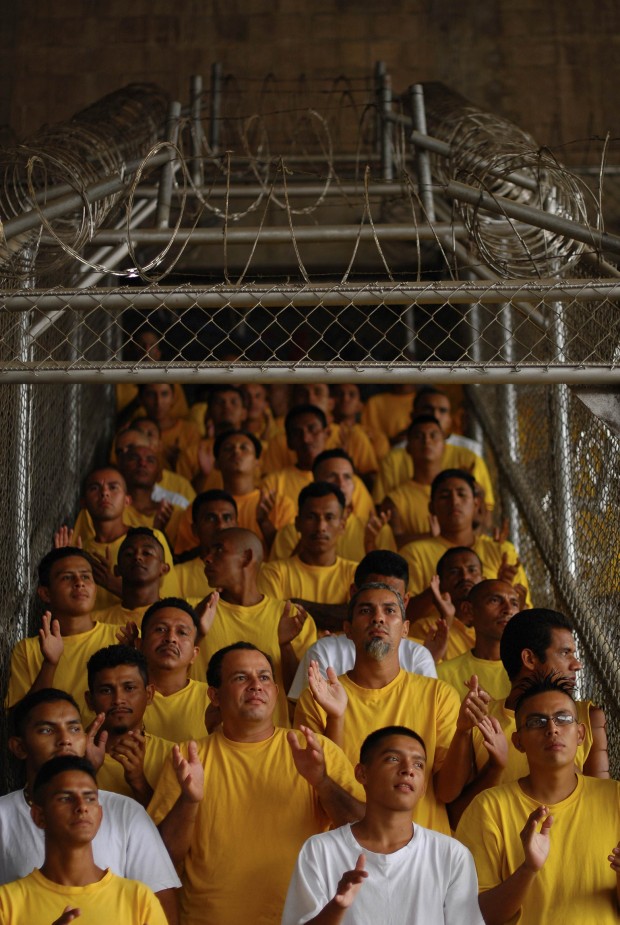 Gang members attend a Mass in early April celebrated by Bishop Fabio Colindres Abarca of the Military Ordinariate of El Salvador at the prison of Izalco near San Salvador. Bishop Colindres helped broker a truce in March that is putting an end to the violence carried out by two notorious rival gangs. (CNS photo/Ulises Rodriguez, Reuters)

SAN SALVADOR (CNS) — Against all odds, as virtually everyone thought that the truce between violent Salvadoran gangs would break at any time, Bishop Fabio Colindres Abarca has proved otherwise. The agreement not only continues but has also led gang leaders to seek an agreement with the government.

“There are people who don’t understand this process and don’t want anyone to support it, and that is not only negative, it’s evil,” Bishop Colindres, who heads the Military Ordinariate of El Salvador, told Catholic News Service.

Bishop Colindres helped broker the truce in March that is putting an end to the violence carried out by El Salvador’s two most notorious gangs: MS-13, or Mara Salvatrucha, and their archenemies of Barrio 18. The other mediator is former guerrilla commander Raul Mijango.

The media, analysts, entrepreneurs and most of the population distrust that gang members want to stop the bloodshed, partly because the groups have terrorized the population with murders, robbery and extortion for years.

“People have a right to doubt, to deny, but not to destroy this process,” said Bishop Colindres.

Between 1980 and 1992, many Salvadorans fled the country’s bloody civil war and settled illegally in the United States, where some absorbed the gang culture. Once deported, they reproduced that culture at home, where it rooted rapidly in slums, fueled by poverty and marginalization of the poor.

Now the two gangs make up an army of more than 60,000 members. Their power has increased to the extent that they provide foot soldiers for drug trafficking operations in Central America.

Another 10,000 are jailed, including leaders of both gangs that felt it was time to negotiate peace.

“We believe we have succeeded in the effort we are making, even if obscured groups do not want this,” said Carlos Mojica, a leader of Barrio 18 locked in the prison in Cojutepeque, near San Salvador.

Since March, homicides have dropped from 12 a day — which made El Salvador one of the most violent countries in the Western Hemisphere — to an average of five daily. Although security sources said some killings by gang members continue, it is clear that the order by imprisoned gang leaders to stop the murders is being heard by the majority of “homies in the barrios.” 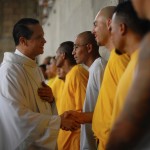 Bishop Fabio Colindres Abarca of the Military Ordinariate of El Salvador shakes hands with members of a gang during a Mass in early April at the prison of Izalco near San Salvador. Bishop Colindres helped broker a truce in March that is putting an end to the violence carried out by two notorious rival gangs. (CNS photo/Ulises Rodriguez, Reuters)

However, doubts arise, observers said, because the government has not been transparent in reporting what the truce has achieved nor its purpose. What people know has been reported by the press.

When the truce made headlines, the government declined a formal role in it and only confirmed that it moved 30 gang leaders from a maximum security prison to one with fewer restrictions.

“The government is already negotiating with the gangs but continues to deny it,” analyst Dagoberto Gutierrez told CNS.

In a country that before 1992 was living the horrors of war, the scars left by the ideology of violence remain.

Some groups, such as right-wing entrepreneurs, oppose the truce because they believe that a reduction in homicides under the center-left government of El Salvador President Mauricio Funes would benefit his left-wing party in the 2014 elections.

Or the drop of homicide figures would help Security Minister David Munguia Payes, a former army general, to seek the presidency with another party rather than the Republican National Alliance, ARENA, the entrepreneurs’ favored party that ruled El Salvador from 1989 to 2009.

Amid distrust and uncertainty about the truce, Bishop Colindres is one of the few working to convince others that it is worth betting on the process.

“God has given us the means to proceed with intelligence. We have a historic opportunity to change the course of the nation,” he said.

Bishop Colindres, 45, spent his days in the anonymity of his parish as military and police chaplain in the Ministry of Defense. The stories he heard about parents who saw their children die in the vortex of violence as well as the inhumane living conditions in the prisons convinced him to step forward as the imprisoned gang leaders were discussing a truce.

The deal between the gangs is not only alive but has moved to the point where gang leaders and the government are exchanging, through mediators, issues that would be addressed at the negotiating table even though it is far from assured that direct talks will occur.

For example, the gangs are asking the government to suspend police operations in gang-controlled territories and rescind laws that deny gang members the same benefits granted to other prison inmates, including parole.

The gangs also want comprehensive rehabilitation programs that include education and employment training, both for those in prison and those still in the streets.

The government, meanwhile, wants gang members to hand over all weapons, commit no more crimes and reveal the locations of the mass graves where allegedly hundreds of Salvadorans killed by gang members are buried.

This rapprochement between gangs and government would not have been possible without the intervention of Bishop Colindres.

The gangs’ efforts has attracted the attention of the Organization of American States. In July, Secretary-General Jose Miguel Insulza visited El Salvador and offered to be a guarantor of the peace process between gangs.

“Jesus said nobody is prophet in his own land,” Bishop Colindres said. “It is paradoxical that in El Salvador is where we found less support.”

NEXT: Vatican firmly condemns US deaths, disrespect against religions