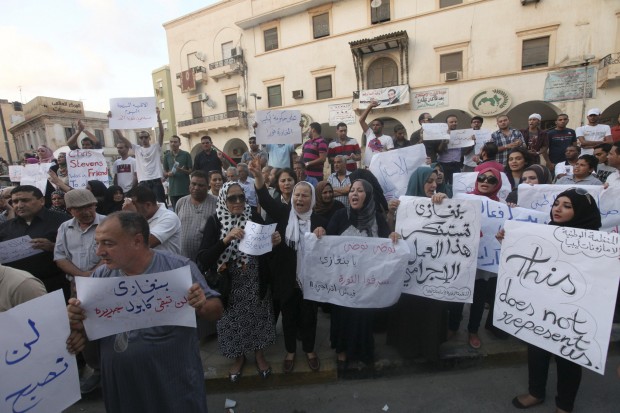 Demonstrators hold signs during a rally Sept. 12 in Benghazi, Libya, to condemn the killers of J. Christopher Stevens, U.S. ambassador to Libya, and the attack on the U.S. consulate in the city. Religious leaders from across the spectrum were quick to condemn the hate message of an anti-Islam film and the violent attack on the consulate it supposedly provoked Sept. 11 in which the Stevens, three other Americans and several Libyan soldiers were killed. (CNS photo/Esam Al-Fetori, Reuters)

UPDATED — VATICAN CITY (CNS) — The Vatican firmly condemned the recent attack against a U.S. consulate in Libya, which led to the death of a U.S. ambassador, three U.S. personnel and at least 10 Libyans.

“The very serious attack organized against the United States diplomatic mission in Libya,” it said, “calls for the firmest possible condemnation on the part of the Holy See.”

“Nothing, in fact, can justify the activity of terrorist organizations and homicidal violence,” said Jesuit Father Federico Lombardi, the Vatican spokesman, in a written statement released Sept. 13.

The U.S. ambassador to Libya, J. Christopher Stevens, and three staff members were killed during what appeared to be a pre-planned, sophisticated armed attack against the U.S. consulate in Benghazi Sept. 11. 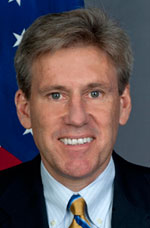 U.S. officials said it was too soon to know whether the attack was related to the anniversary of the Sept. 11, 2001, attacks in the United States. Authorities were looking into those responsible for the raid, which according to witnesses, also involved the use of rocket-propelled grenades.

(Read reaction of religious leaders in the United States).

“Along with our sadness, mourning and prayers for the victims, we again express hope that, despite this tragedy, the international community may discover the most favorable ways to continue its commitment in favor of peace in Libya and the entire Middle East,” Father Lombardi said.

The statement came after an earlier Vatican communique decrying disrespect toward all religions and deploring all violence as unacceptable.

“Profound respect for the beliefs, texts, outstanding figures and symbols of the various religions are an essential precondition for the peaceful coexistence of peoples,” Father Lombardi said in a Sept. 12 statement.

“The serious consequences of unjustified offense and provocations against the sensibilities of Muslim believers are once again evident in these days, as we see the reactions they arouse, sometimes with tragic results, which in turn nourish tension and hatred, unleashing unacceptable violence,” said the written statement, which was also translated into Arabic.

The Vatican said that statement was a response to a growing sense of anger and unrest erupting in parts of the Middle East in reaction to the trailer of a U.S.-made amateur film mocking the prophet Mohammed. Though the trailer had been released online in July, it grabbed Arab media attention only after its recent translation into Arabic.

Tensions over the film had been mounting in Egypt and thousands of unarmed demonstrators gathered outside the United States Embassy in Cairo Sept. 11. Some of the demonstrators eventually breached the compound’s walls and destroyed a flag found inside.

Mob protests followed in Libya, including the attack on the U.S. compound in Benghazi later that night. Protests against the film spread to Yemen Sept. 13 with reports of demonstrators storming the U.S. embassy in Sanaa.

The deaths of the Americans in Libya had already been reported by the time the Vatican released the first statement Sept. 12, but the circumstances and motives behind the attack were still unclear, Father Lombardi told reporters that day.

The Vatican chose to first address the concern that had been brewing for some time, namely “the waves of agitation spreading in the Muslim world in reaction to the offenses against their religious sensibilities,” Father Lombardi told Catholic News Service Sept. 13.

The Sept. 12 statement appeared “in the context of the pope’s imminent trip” to Lebanon Sept. 14-16 and it “condemned these offenses and at the same time the violent reactions,” he said.

“However, the seriousness of the attack against the U.S. representatives in Libya — its organized and pre-planned nature — became clearer during the day. Therefore, it appeared correct (to issue) a specific strong condemnation of organized terrorism,” he told CNS.

Father Lombardi told journalists Sept. 12 that Pope Benedict XVI’s trip to Lebanon would continue despite the fresh wave of unrest in the region because the pope’s journey is a testament of “peace, understanding and dialogue that’s completely opposed to this kind of tension that has been and is being created.”

“The message of dialogue and respect for all believers of different religions, which the Holy Father is preparing to carry with him on his forthcoming trip to Lebanon, indicates the path that everyone should follow in order to construct shared and peaceful coexistence of religions and peoples,” the spokesman wrote.

In Egypt, Copts and other Christians joined Muslims in protesting the film, said the director of communications for the Catholic Church in Egypt.

“Also on Facebook and other social media, Christians and Muslims are united in the protest,” Father Rafic Greiche told the Vatican’s missionary news agency, Fides Sept. 13.

“The Catholic Church, the Orthodox and Protestants issued a statement in Arabic against the film,” saying that “Christians are familiar with the desecration of what is most sacred to them,” said the priest.

He added that Christians “are the first to have experienced this kind of desecration of one’s own religious symbols and are the first to respect Islam and all religions with their symbols.”