US Catholics urged to renew commitment ‘to defend’ life during October 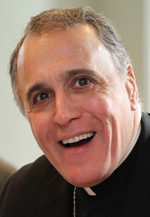 WASHINGTON (CNS) — During October, designated each year as Respect Life Month by the U.S. Catholic Church, Catholics should “renew their personal commitment to defend all human life, especially the most vulnerable members of the human family,” said the chairman of the U.S. bishops' Committee on Pro-Life Activities.

“By our unflinching defense of human life and religious freedom, by our witness to the transcendent nature of the human person, and by our compassionate service to our brothers and sisters in need, may we spark a renewal of love and commitment to the true good of others,” said Cardinal Daniel N. DiNardo of Galveston-Houston.

“Only a love that seeks to serve those most in need, whatever the personal cost to us, is strong enough to overcome a culture of death and build a civilization worthy of human beings made in God's image,” he added in a statement.

Respect Life Sunday, the first Sunday in October, kicks off a yearlong Respect Life Program, marked by special liturgies and events. The program theme for 2012-13 is: “Faith opens our eyes to human life in all its grandeur and beauty.”

The U.S. Conference of Catholic Bishops' Secretariat of Pro-Life Activities has published a packet of materials for priests, parish groups and other organizations.

One pamphlet, titled “The Call to Greatness,” is aimed specifically at young people, encouraging more of them to get involved in the pro-life movement and build on what youths have already been doing to promote “the culture of life” as youth ministers, religion teachers, lobbyists, speakers and leaders.

In his statement, Cardinal DiNardo cited the “staggering loss of life” through abortion and “consequent need for healing” afterward. He discussed the destruction of “extra” embryos and the “selective reduction” of children in utero during fertility procedures; continued promotion of embryo-destructive stem-cell research; and euthanasia.

Family and community bonds, he said, have eroded in the four decades since Roe v. Wade, the 1972 U.S. Supreme Court decision that legalized abortion virtually on demand.

He also pointed to what he called an erosion of respect for conscience rights, especially under the health care laws' mandate requiring all employers, including most religious employers, to provide coverage in their health care plans for contraceptives, including some that can cause abortions, and sterilizations.