Kateri and Jake: American Indians are joined in sainthood cause 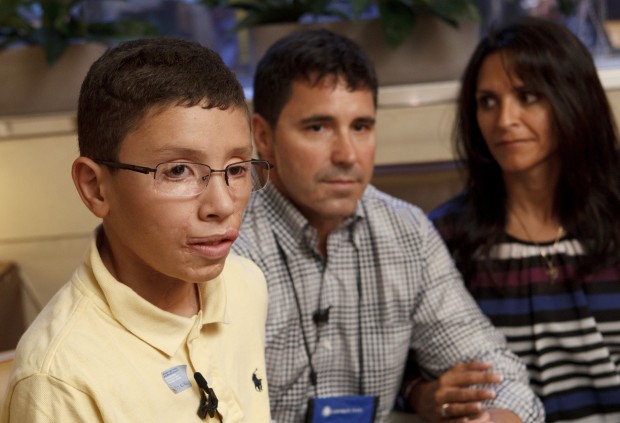 VATICAN CITY (CNS) — Jake Finkbonner knows what it’s like to have kids tease him because of the way he looks, but one of his heroes also grew up being teased.

The 12-year-old boy said Kateri Tekakwitha, who was to become an official saint Oct. 21, was “an inspiration because I remember reading that many of the children in her tribe teased her because of her faith, but she continued to praise God and she made her own rosary.”

“One of the things she always tried to do was spread her faith, even though her uncle and aunt didn’t really approve of it,” he said.

Kateri was raised by her Mohawk father’s family after her parents died in a smallpox epidemic; Kateri survived, but with a scarred face and damaged vision.

Jake and his parents — Donny and Elsa — his two little sisters, all four of his grandparents and lots of aunts and uncles traveled to Rome for Kateri’s canonization.

The scars left on Jake’s face are all that remain of the flesh-eating bacteria that nearly took his life almost seven years ago. The sudden disappearance of the necrotizing fasciitis was recognized by the Vatican as the miracle needed for the canonization of Kateri, who Jake proudly explains “will be the first Native American saint.”

Jake’s dad, Donny, is a member of the Lummi Nation. The family lives in Sandy Point, Wash., on the Lummi reservation.

Jake was teased a lot, especially when he was younger and was first recovering, but “now I don’t really have problems with that,” he said.

Jake said he wants to be a plastic surgeon when he grows up so he can help other children; while he believes Kateri interceded to save his life, he also says his doctors “had a big part in my recovery.”

Jesuit Father Paolo Molinari, who has spent more than 50 years as Kateri’s postulator, promoting her canonization, said miracles are “the confirmation by God of a judgment made by human beings” that the potential saint really is in heaven.

Jake’s parents provided Father Molinari with Jake’s hospital records and photographs taken by his physicians documenting the boy’s condition. The material, including interviews of Jake’s doctors conducted by officials of the Archdiocese of Seattle, were turned over to the Vatican Congregation for Saints’ Causes.

Father Molinari said, “It’s really moving to see the declarations of the doctors who gave an account of what they went through for three weeks — the child really went between life and death, life and death.”

The Jesuit said he also was touched by what the Finkbonners’ parish priest reported the parents saying: “Father, we’ve decided to respond like Abraham, and if God wants to take our son, we’ll say, ‘yes.'”

But the priest told the parents that they could ask God to return their son to them, and he suggested they pray to Blessed Kateri, who died in 1680.

“That was the beginning of a movement of prayer that was extremely strong and solid,” Father Molinari said, describing how the praying spread from the family, to Jake’s classmates, the parish and the Tekakwitha Conference, which serves indigenous communities in North America.

“They were all wanting to touch me and come and hug me and things like that,” he said. Jake said he was impressed by “how spiritual they were and how active they were in their faith.”

Jake’s dad said there was a statue of Kateri in the reservation church where he grew up, and that his own parents had told him Kateri’s story.

“It wasn’t like it was a daily thing,” he said; “it was just a story that was passed on.”

“For us, it’s like she’s a hero in the Catholic faith,” Donny Finkbonner explained. Kateri is “an example for us to follow, somebody who stood up for her faith even though it wasn’t a popular thing.”

Growing up, he said, Kateri’s story was “something we had pride over — she lived more than 300 years ago and her story’s still being told and, so, looking back on her story it’s kind of come full circle with Jake’s miracle.”

Father Scott Connolly is pastor of Assumption Parish where Jake and his sisters go to school. He traveled with dozens of his parishioners on a pilgrimage to Rome for the canonization.

“The saints are so important in our life as a Catholic people,” he said. “The fact that we actually have a miracle in our school — someone we can actually touch and see and talk to and enjoy” — has an impact on the community, but also on native peoples in the United States and Canada, and on the whole church.

Amid all the fuss, Father Connolly said, “one of the things I’ve realized is that miracles are happening all of the time and we don’t actually recognize that.”

Jake — who took a while to warm up to the idea of being surrounded by reporters, photographers and television cameras — said he is convinced that “Kateri truly did intercede and if it weren’t for her, I wouldn’t be here.”