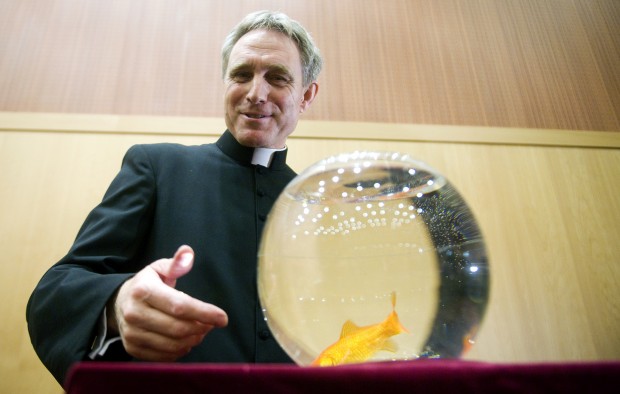 Archbishop-designate Georg Ganswein, personal secretary of Pope Benedict XVI and prefect of the papal household, stands next to a fish bowl during the presentation of the Italian-language children's book "The Mystery of a Little Pond" in Rome Dec. 11. Archbishop-designate Ganswein said the book, written and illustrated by Russian painter Natalia Tsarkova, accurately reveals the sensitive soul of the pope. (CNS photo/Alessia Giuliani, Catholic Press Photo)

The Italian-language book, “The Mystery of a Little Pond,” was written and illustrated by the Russian painter Natalia Tsarkova and was presented at a Dec. 11 conference by the archbishop-designate and a panel of experts, including the director of the papal summer villa at Castel Gandolfo.

The tale takes place in a pond guarded over by a statue of Mary in the gardens of the papal villa and features a little goldfish who — even in real life — is fed by Pope Benedict during his evening stroll.

“But preparing a homily for children is draining,” the archbishop-designate said. “They immediately see if you are being superficial and they are unforgiving if you are not sincere.”

Archbishop-designate Ganswein, who will be ordained a bishop Jan. 6 by Pope Benedict and serve as prefect of the papal household, said the book accurately portrays a pope who “pays attention to the littlest creatures.”

Young and old, he said, will “discover the mystery of the current pope who we all know is a great theologian with a very acute mind, but who has a very, very, very sensitive soul.”

The 56-year-old archbishop-designate told those gathered for the book launch that during his years as a young assistant pastor in Germany’s Black Forest, he was in charge of the children’s liturgies.

“It is never easy to prepare a homily — sometimes you are able to do it well, sometimes less so — it depends on several things,” he said.

“But preparing a homily for children is draining,” the archbishop-designate said. “They immediately see if you are being superficial and they are unforgiving if you are not sincere.”

NEXT: The good, bad, ugly: Church can’t shy away from Twitter’s Wild West