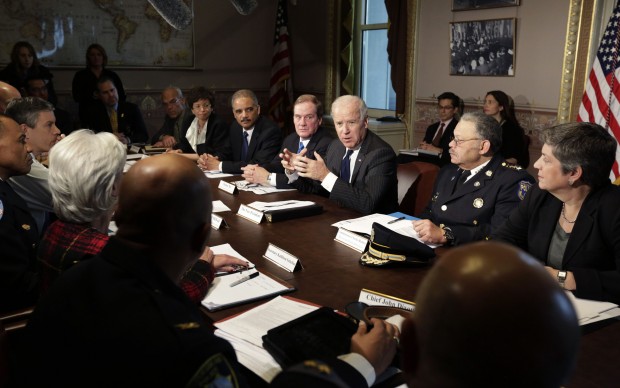 U.S. Vice President Joe Biden, center, gives a statement to the media before convening a meeting on gun violence with law enforcement leaders and White House officials at the White House Dec. 20 in Washington. To the right of Biden is Philadelphia Police Commissioner Charles Ramsey, a Catholic, profiled previously in The Catholic Standard and Times. (CNS photo/Chris Kleponis, Reuters)

“The bishops continue to support measures that control the sale and use of firearms and continue to call for sensible regulations on handguns,” Kathy Saile, the bishops’ director of domestic social development, told Catholic News Service.

“In addition to that, we need to make a serious commitment to address the pervasive role that addiction and mental illness have in crime,” she said in the wake of the horrendous events of Dec. 14 at Sandy Hook Elementary School in Newtown, Conn., that left 20 children, six educators and the heavily armed gunman who attacked the school dead.

Police identified the shooter as Adam Lanza, 20, who killed himself as first responders arrived on the scene. Before he arrived at the school, he shot and killed his mother, Nancy Lanza.

If gun control measures are introduced in the new Congress, the bishops will discuss whether a public statement is appropriate and how active to become involved in the legislative process, Saile added.

In a Dec. 21 statement on the shooting, the chairmen of three U.S. bishops’ committees — domestic policy, communications, and marriage and family life — reiterated points from the bishops’ 2000 statement on crime and criminal justice. In it they called for “measures that control the sale and use of firearm … that make guns safer” and for “sensible regulations of handguns.”

Sen. Joe Manchin, D-W.Va., a Catholic, welcomed the Catholic Church’s involvement in the conversation on gun violence and possible restrictions on certain firearms.

The senator, a strong supporter of gun rights, told CNS Dec. 19 that the church could play a significant role in upcoming discussions that he hopes will involve not just Congress and the White House, but also mental health professionals, law enforcement officers and child advocates in determining the best path to protect society.

“These are the conversations I’m now willing to have. It’s something we should do now,” Manchin said.

“If it’s all about guns, guns and guns, then you’re accusing everybody who’s a law-abiding citizen, who might belong to the NRA, who has used guns responsibly. You put them in the same box (as someone using guns illegally). It’s a brush on all of them.”

Manchin’s unexpected call on the “Morning Joe” show Dec. 17 for a national conversation on gun violence was uplifting to grass-roots groups that in the days since the Newtown atrocity have renewed their desire to see assault weapons outlawed and stricter limits on all firearms.

The Sandy Hook massacre also prompted at least one retailer, Dick’s Sporting Goods, to suspend the sale of certain kinds of semiautomatic weapons nationwide and stop selling guns altogether at its store nearest Newtown. How long the policy would remain in effect was not known.

The call for stricter gun laws comes as Americans now possess nearly 300 million firearms. The number of guns in private hands has climbed exponentially over the years.

A National Institute of Justice survey in 1994 found that civilians owned 192 million guns. Two years later, the Bureau of Alcohol, Tobacco and Firearms reported that about 242 million firearms were owned by civilians or available for sale. That number rose to about 259 million in 2000 and about 294 million in 2007, the latest years statistics are available.

The bishops’ stance on gun control has remained in place since 1975 when they called for a national firearms policy. Their concern then was over the proliferation of “Saturday night specials,” cheaply made and inexpensive weapons that debuted four decades ago and quickly became the weapon of choice for street criminals.

Their distress over gun violence surfaced again in 1994 in a pastoral message titled “Confronting a Culture of Violence: A Catholic Framework for Action.” While they did not call for specific controls on firearms at the time, the bishops cited the proliferation of guns among young people and the rising number of shooting deaths and injuries among children and teenagers as priorities for the country to address.

The bishops since then widened their focus to encompass assault weapons. Prior to the past two presidential elections, the bishops in their quadrennial statement “Forming Consciences for Faithful Citizenship” supported “reasonable restrictions on access to assault weapons and handguns.”

The bishops are not alone. Other religious leaders, community activists and advocates for families and children have long called for strict regulations and bans on weapons specifically designed to kill, as well as stronger controls on handguns.

Overall, according to the survey, 52 percent of people favor stricter regulations on guns with 44 percent opposed.

Conducted in early August, the survey sampled 1,006 adults and has a margin of error of plus or minus 3.5 percentage points.

Such calls, however, have largely been ignored in Congress and in state legislatures over the years. Citing the rights established under the Second Amendment, the pro-gun lobby, led by the National Rifle Association, has deployed dozens of lobbyists and spent hundreds of millions of dollars to overturn existing regulations on guns and defeat new efforts to limit gun rights for decades.

The killings at Sandy Hook may just cause the political landscape to change, however, especially as some key pro-gun legislators have said their desire is the safety of all Americans. The NRA said it was “prepared to offer meaningful contributions to help make sure this (Newtown) never happens again.”

At a Dec. 21 news conference in Washington, executive vice president Wayne LaPierre said like the rest of the country, the NRA mourned the loss of life. He called on Congress to place armed police officers in all schools to prevent future school shootings, not unlike, he said, the security in place at office buildings, banks, airports and sports arenas.

LaPierre, who was interrupted twice by protesters, also blamed the Dec. 14 shooting on the media and violent movies and video games and urged the government to create “an active national database of the mentally ill.”