Agenda for a year of faith: looking ahead for the church in 2013 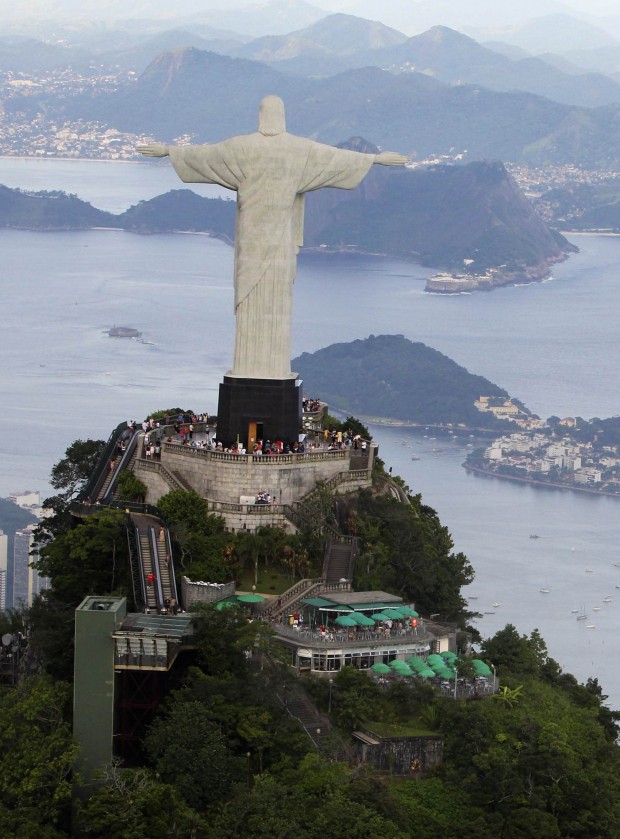 The famous Christ the Redeemer statue is seen in 2011 atop Corcovado Peak in Rio de Janeiro. Hundreds of thousands of young Catholics are expected to gather in Rio in July for a week of events whose highlight will be the presence of the pope, encouraging them to cultivate their faith and religious identity. (CNS photo/Bruno Domingos, Reuters)

VATICAN CITY (CNS) — Fortunetelling, like all occult practices, is strictly taboo at the Vatican; and prophecy is a rare gift among journalists. But Pope Benedict XVI’s calendar for 2013 is already filling up with planned, probable or possible events. Here are 10 to watch for in the news during the coming year.

Italian elections: When Italians go to the polls Feb. 24, the big story for most foreign observers will be the fate of a comeback attempt by former Prime Minister Silvio Berlusconi. For the pope and other Italian bishops, a prime concern will be whether voters instead elect a center-left majority that could bring Italy into sync with other major Western European countries — and out of line with Catholic moral teaching — on such issues as in vitro fertilization and legally recognized unions of same-sex partners.

New Encyclical: Pope Benedict’s fourth encyclical will be released in the first half of next year, very possibly in the spring, according to Jesuit Father Federico Lombardi, the Vatican spokesman. Treating the subject of faith, the encyclical will complete a trilogy on the three “theological virtues”; the previous installments were “Deus Caritas Est” (2005) on charity, and “Spe Salvi” (2007) on hope.

Worldwide solemn eucharistic adoration: On the feast of Corpus Christi, June 2, Pope Benedict will lead an hour of eucharistic adoration to be observed simultaneously around the world, highlighting a traditional devotion that fell largely out of use in the decades after the Second Vatican Council, but which has lately grown more popular with the pope’s personal encouragement. This promises to be one of the most visually impressive of many events scheduled for the Year of Faith, which ends Nov. 24.

New charter for health care workers: The Vatican plans to publish an updated version of its 1995 guidelines for Catholic hospitals, taking into account nearly two decades of technological developments and political trends in areas including abortion, euthanasia, embryonic stem-cell research and human cloning. The document, whose target release date is in June, will reflect Catholic moral teaching on biomedical issues and Catholic social teaching on the equitable and effective provision of health care.

World Youth Day in Rio de Janeiro: Hundreds of thousands of young Catholics are expected to gather in Rio in July for a week of events whose highlight will be the presence of the pope, encouraging them to cultivate their faith and religious identity. This will be Pope Benedict’s second trip to Brazil, the country with the world’s largest Catholic population, where he is also likely to address problems of inequality in a developing economy, as well as the need for good government and civil peace in Latin America as a whole.

New U.S. ambassador? The post of U.S. ambassador to the Vatican has been vacant since Miguel H. Diaz stepped down shortly after the November 2012 elections, and the choice of his replacement will be especially delicate given current tensions between the church and the Obama administration. All previous ambassadors have been Catholics, but it could be hard to find one who has not taken a public stand over the administration’s plan — strenuously opposed by U.S. bishops — to require that most Catholic institutions provide insurance coverage for contraception and sterilizations, which violate the church’s moral teaching.

New Secretary of State? Cardinal Tarcisio Bertone has served as Pope Benedict’s top aide since 2006. Some commentators, especially in the Italian press, have accused him of neglecting necessary administrative reforms and blamed him for mismanagement, documented in the so-called “VatiLeaks” of confidential correspondence. Pope Benedict reaffirmed his confidence in his longtime collaborator last July, but the cardinal is already three years past the standard retirement age of 75, so he could well leave the stage this year. His replacement would likely be another Italian, perhaps Cardinal Mauro Piacenza, currently prefect of the Congregation for the Clergy.

New archbishop of Chicago? Cardinal Francis E. George, who has led the Archdiocese of Chicago since 1997, turned 75 — the age at which bishops must offer to resign — last Jan. 16. Pleased with the effects of his recent chemotherapy for kidney cancer, he has called his prognosis “very, very hopeful” and said that he has no plans to step down. But he has acknowledged the seriousness of his condition and the possibility that Pope Benedict might replace him this year.

New cardinals? The number of cardinals under the age of 80, the only ones eligible to vote for the next pope, will be down to no more than 110 by Oct. 19. Pope Benedict could choose to boost their number to the legal limit of 120 by calling a consistory on the day before the feast of Christ the King (Nov. 24, 2013), a traditional occasion for the creation of cardinals and the last day of the Year of Faith. Likely additions to the College of Cardinals include Archbishop Gerhard L. Muller, prefect of the Congregation for the Doctrine of the Faith, and Archbishop Vincent G. Nichols of Westminster, England.

Anniversary of the Edict of Milan: 2013 is the 1,700th anniversary of the Roman Empire’s legal toleration of Christianity, a watershed moment in the history of the church. Hopes have dimmed that Pope Benedict and Russian Orthodox Patriarch Kirill of Moscow might jointly commemorate the occasion at the Serbian birthplace of the Emperor Constantine I, who promulgated the edict. But the pope is almost certain to mark the anniversary in some way, perhaps taking the opportunity to highlight one of his primary concerns, threats to religious liberty around the world today.

NEXT: Despite evil, human beings are hard-wired for peace, pope says