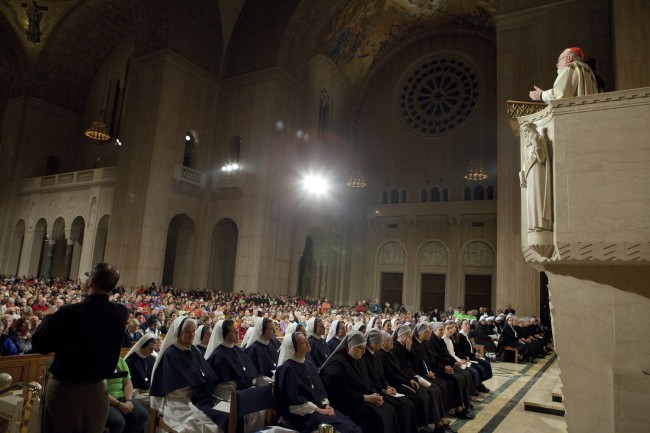 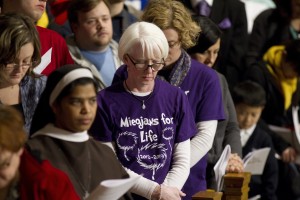 People pray during the opening Mass of the National Prayer Vigil for Life at the Basilica of the National Shrine of the Immaculate Conception in Washington Jan. 24. (CNS photo/Nancy Phelan Wiechec)

WASHINGTON (CNS) — For 39 years, Dave Katich of All Saints Parish in Etna, Pa., wanted to attend the opening Mass for the National Prayer Vigil for Life, but something always kept him away.

Katich and his wife, Debi, finally joined their friends from All Saints, Frank and Sherry Rectenwald, for the four-hour trip to Washington from their homes just north of Pittsburgh for the two days of distinctly Catholic events marking the anniversary of the 1973 Supreme Court decision that legalized abortion.

“I felt compelled to be here,” Katich told Catholic News Service an hour before the Mass began in the filled-to-capacity Basilica of the National Shrine of the Immaculate Conception. “It’s probably the most important thing our faith believes, the right to life. Every human being has the God-given right to live.”

The two couples were among the thousands who began filing into the basilica hours before the liturgy. Many of those in attendance prayed overnight in the basilica’s crypt, keeping a vigil for life.

Standing with her mother and younger brother near one of the side chapels about halfway back in the massive church, Isent George, 8, was dwarfed by the throng of people passing back and forth as they sought out old friends and tried to find just the right spot in the hope of catching a glimpse of the celebrants on the main altar. She understood the importance of being at the Mass.

“We should end abortion because it’s actually murdering the embryos that are actually babies formed from God,” she said. “God made that creation and we have no right to kill babies.”

Cardinal O’Malley in his homily focused on the direction in which he believes the pro-life movement should be headed by calling upon Catholics to work to change society’s negative perception of adoption so that it is seen as a better option than abortion for women, especially those facing a crisis pregnancy.

Isent’s mother, Nisha, told CNS she and her husband wanted to make the cross-country trip from St. Helen Parish in Phoenix to show their three children the importance of taking a stand for life and upholding the family’s Catholic faith. The trip east was the family’s first.

“It’s important to speak up and be visible,” she said. “It’s not about women’s freedom. It’s about life.” 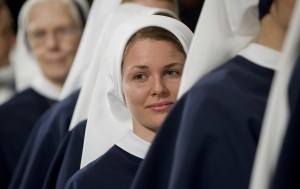 On the other side of the basilica near the back, Anne Pirie, 20, of Akron, Ohio, and Jacquie Lustig, 24, of Cottonwood, Idaho, were enthusiastic about participating in the vigil despite being unable to see much of the liturgy from their vantage point. Both are consecrated women within Regnum Christi, the lay movement of the Legionaries of Christ, and students at the order’s Mater Ecclesiae College in Greenville, R.I.

“This is something every Christian should really be interested in. That’s a lot of what my vocation is about. I’m a Catholic layperson and I’m also totally dedicated to God. This is something I want to be a part of and this is a message I want to get out there,” Pirie said moments before Mass began.

“I feel a great need to show my real respect and my love for the people who are involved in this,” Lustig agreed. “Especially being a woman, I have a great love to uphold the dignity of women and I don’t think abortion does justice to that dignity.”

The Mass began with a 45-minute procession as hundreds of clergy entered the basilica and took their places around the main altar. Cardinal Sean P. O’Malley of Boston, chairman of the U.S. Conference of Catholic Bishops Committee on Pro-Life Activities was the main celebrant.

As he began his homily, Cardinal O’Malley recalled the work of Nellie Gray, the founder of the March for Life to protest legalized abortion who died in August at 86. He described Gray as “the Joan of Arc of the Gospel of life.”

The cardinal said he worked alongside Gray as a young priest in the 1970s.

“She was an inspiration for myself and countless others. Surely she continues to pray for us in her place for eternity,” he said.

Cardinal O’Malley then focused on the direction in which he believes the pro-life movement should be headed by calling upon Catholics to work to change society’s negative perception of adoption so that it is seen as a better option than abortion for women, especially those facing a crisis pregnancy.

He said the Year of Faith, which runs through November, “is a call to a deeper conversion so we can become effective apostles of the Gospel of life in the new evangelization.”

Citing the Gospel reading for the Mass — Luke 1:39-45, Mary’s visitation to Elizabeth — Cardinal O’Malley said the “the Gospel of life is imperative to Christ’s disciples.”

“God is urging us to be defenders of life in the midst of the culture of death,” he said in urging widespread efforts to change the perception that adoption is a bad choice for women.

“Too many Americans see abortion as a necessary evil,” he added. “We need to educate the public about the damage done to women by abortion.”

Pointing to the important work done by staff and volunteers at pregnancy centers and programs that support single mothers, Cardinal O’Malley called for broadening such efforts so that women turn away from abortion.

Work also must continue on the legislative and judicial fronts so that legalized abortion comes to an end, he said.

At the same time, he explained, Catholics must work more than ever “to change people’s hearts, to help Americans understand that abortion is evil and it is unnecessary.”

“It’s not just the lucidity of our arguments, but about the effect our words have on others,” the cardinal said. “Our task is to present the truth with civility, empathy and clarity. Being compassionate about the Gospel of life is about building a new civilization with love,” Cardinal O’Malley said.