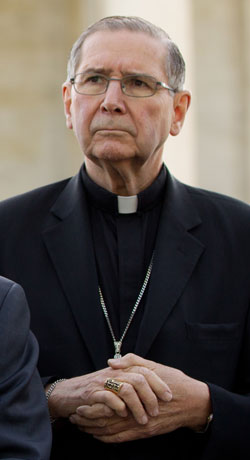 LOS ANGELES (CNS) — As the Archdiocese of Los Angeles released church records on clergy sexual abuse, Cardinal Roger M. Mahony again apologized to abuse victims, saying he was naive about its impact on their lives.

The cardinal, who retired as archbishop of Los Angeles in 2011, also said in a statement Jan. 21 that he prays for victims of abuse by priests daily as he celebrates Mass in his private chapel.

“It remains my daily and fervent prayer that God’s grace will flood the heart and soul of each victim, and that their life journey continues forward with ever greater healing,” he said, explaining that on his altar he keeps cards with the names of each of the 90 victims he met with from 2006 to 2008.

“As I thumb through those cards I often pause as I am reminded of each personal story and the anguish that accompanies that life story,” Cardinal Mahony said.

“I am sorry,” the cardinal’s statement concluded.

Cardinal Mahony’s comments followed the publication by the Los Angeles Times and Associated Press portions of documents filed in court as part of a lawsuit against the archdiocese. Some of files showed archdiocesan officials worked to conceal child molestation by priests from law enforcement authorities in the 1980s.

The release came two weeks after a Superior Court judge’s ruling that the names of personnel identified in the files could be made public. Judge Emilie H. Elias’ Jan. 7 ruling overturned an earlier decision by a retired federal judge who, acting as a mediator in a settlement between the archdiocese and those who claimed they were sexually abused, said that material to be released should have names redacted to prevent the documents’ use to “embarrass or ridicule the church.”

Church officials in Los Angeles had fought for years to keep the files private.

The 2007 settlement for $600 million covered more than 500 people who made claims about being sexually abuse by priests and other church personnel. Some of the priests who had claims against them sued to keep their names from being released, saying it violated their privacy rights.

While the archdiocese’s actions to protect priests accused of abuse and its reluctance to work with investigators is known, the documents offer a closer look at the efforts undertaken to safeguard accused clergy.

Memos exchanged in 1986 and 1987 by Cardinal Mahony and Auxiliary Bishop Thomas J. Curry, who was the archdiocese’s vicar of clergy and chief adviser on sexual abuse cases at the time, reveal proposals to keep police from investigating three priests who had admitted to church officials that they molested young boys, the Los Angeles Time reported.

The documents show that Bishop Curry suggested to Cardinal Mahony that they prevent the priests from seeing therapists who might alert authorities and that the priests be given out-of-state assignments to avoid criminal investigators.

The newspaper said the memos were from personnel files for 14 priests.

Files of at least 75 more accused abusers are to become public in coming weeks under the terms of the settlement.

Bishop Curry and the archdiocese apologized for their actions in the handling of abuse reports in statements Jan. 22.

“I wish to acknowledge and apologize for those instances when I made decisions regarding the treatment and disposition of clergy accused of sexual abuse that in retrospect appear inadequate or mistaken,” said the bishop, who is assigned to the archdiocesan region around Santa Barbara northwest of Los Angeles.

“Most especially, I wish to express my sympathy to all the victims of sexual abuse by clergy. Like many others, I have come to a clearer understanding over the years of the causes and treatment of sexual abuse,” he continued, “and I have fully implemented in my pastoral region the archdiocese’s policies and procedures for reporting abuse, screening those who supervise children and abuse prevention training for adults and children.”

In its apology, the archdiocese said “no institution has learned more from mistakes made decades ago in dealing with priests who have abused young people than the Archdiocese of Los Angeles.”

“We have apologized for the sad and shameful actions of some priests as well as for our inadequate responses in assisting victims and in dealing with perpetrators, the archdiocese said in citing the steps it has since taken to report abuse allegations to law enforcement officials.

“The past cannot be changed, but we have learned from it,” the statement said.

The newspaper reported archdiocesan attorney Michael Hennigan said in a statement Jan. 21 that church policy in the late 1980s was to let victims and their families decide whether to go to police.

“Not surprisingly, the families of victims frequently did not wish to report to police and have their child become the center of a public prosecution,” he said.

Hennigan also said that memos from that era “sometimes focused more on the needs of the perpetrator than on the serious harm that had been done to the victims.”

“That is part of the past. We are embarrassed and at times ashamed by parts of the past. But we are proud of our progress, which is continuing,” Hennigan said.

Cardinal Mahony’s statement, released through the archdiocese, said steps to safeguard “all children in the church began here in 1987 and progressed year by year as we learned more about those who abused and the ineffectiveness of so-called ‘treatments’ at the time.”

“Nonetheless, even as we began to confront the problem, I remained naive myself about the full and lasting impact these horrible acts would have no the lives of those who were abused by men who were supposed to be spiritual guides,” Cardinal Mahony said.