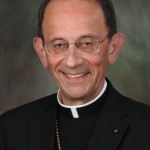 ERIE, Pa. (CNS) — Erie Bishop Lawrence T. Persico said he was disappointed a federal judge dismissed the diocese’s case against the federal contraceptive mandate as premature but also said he found encouragement in the decision.

“I was obviously hoping that the court would find our case ripe for adjudication,” Bishop Persico said in a Jan. 22 statement about the ruling issued the same day by Judge Sean J. McLaughlin of the U.S. District Court for the Western District of Pennsylvania.

“I am, however, heartened by the court’s statement that the preventive services mandate as it exists today will never be enforced against the diocesan entities that brought this suit,” the bishop added.

In his ruling, McLaughlin said the diocese’s case was not ripe for judicial review because the government said it has not issued a final rule on the mandate but plans to do so before August 2013.

McLaughlin said diocesan officials’ “assumption that they will be subjected to the mandate in a manner that violates their sincerely held religious beliefs is, at most, a contingency which may well never come to pass.”

The U.S. Department of Health and Human Services mandate requires employers, including most religious employers, to include coverage for contraceptives, sterilization and some abortion-inducing drugs free of charge, even if the employer is morally opposed to such services.

The requirement, which is part of the Affordable Care Act, has a narrow exemption that applies only to those religious institutions that seek to inculcate their religious values and primarily employ and serve people of their own faith. It does not include a conscience clause for employers who object to providing such coverage.

The government has said it will publish notice of proposed rulemaking in the first quarter of this year and issue a final rule on the mandate before August. In the meantime, the Obama administration has in place a “safe harbor” period that protects employers from immediate government action against them if they fail to comply with the mandate.

In his ruling, McLaughlin said: “At bottom, all of these professed harms … share a common premise: the assumption that the (diocese’s) religious liberties can only be adequately accommodated by exempting (the diocese) from the mandate altogether rather than by altering the terms of the mandate itself.

“However,” he continued, “that assumption is unwarranted given that the future form of the mandate is yet unknown. Indeed, this uncertainty precisely illustrates why the pending dispute is unfit for review.”

The judge said he considers the government’s “promise to engage in further rule-making as a good faith, binding commitment,” and dismissed the Erie Diocese’s case “without prejudice,” which means the diocese can bring the case back to court.

Bishop Persico said he was “encouraged by the court’s belief that the government’s statements in this and other cases are being taken as a ‘commitment’ by the government to make a meaningful change to the regulations so that Catholic and other religious entities will never be forced to provide services which violate our religious beliefs.”

“These are two assurances which we did not have when the case was filed,” the bishop said.

He praised McLaughlin for “this thoughtful opinion.”

“We hope and pray that the government will make the kinds of meaningful changes to these regulations that it has promised so that our Catholic agencies can continue the social services work which they do without fear of fines and penalties or being forced to violate our religious beliefs,” Bishop Persico added.

He said he still believes the mandate in its current form “is a violation of our First Amendment right to religious liberty. We anxiously await the promised revisions to the regulations and hope that we will not have to bring the matter before the courts again in order to secure religious liberty — a fundamental American right — for our fellow citizens and for future generations.”

Bishop Persico also emphasized that the Catholic Church “has advocated for health care reform for many decades, with special concern for the poor, the inclusion of legal immigrants and always with the absolute necessity that it respect the life and dignity of every person, from conception to natural death.”

NEXT: Faithful urged to preach pro-life in and out of season like St. Paul