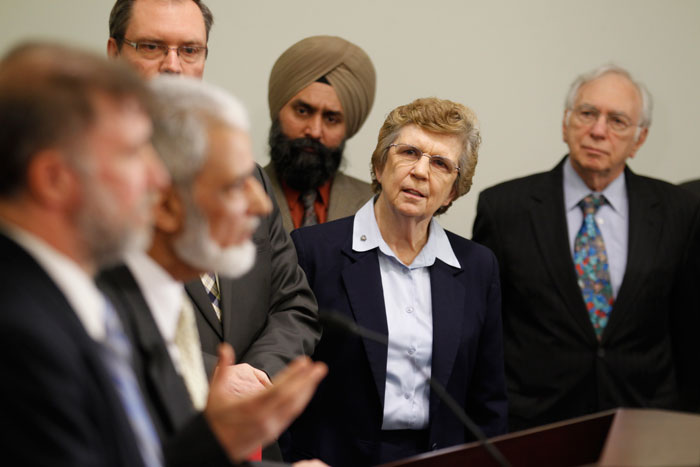 WASHINGTON (CNS) — If Vincent DeMarco is right — and he’s got a whole bunch of faith leaders and their organizations lined up to work with him — ending easy access to the kinds of high-power guns used in mass shootings can be accomplished with a tried-and-true strategy.

DeMarco, national coordinator of Faiths United to Prevent Gun Violence, believes the financial and political clout of the gun lobby in opposing any gun restrictions can be defeated by the same kind of grass-roots, faith-based strategy that he believes broke through the tobacco lobby’s power, enabling the enactment of government controls on tobacco marketing, and new cigarette taxes to fund children’s health care.

Polls show the vast majority of Americans, including the majority of gun owners, support some restrictions, such as more thorough background checks for gun purchasers and bans on semiautomatic assault weapons, DeMarco said.

“But there are people in Congress who don’t believe that,” he said. “We’re going to make sure they know.”

“We’re going to succeed because our faith leaders are going to make sure they hear” that their constituents support some controls, he added. Just such an effort that DeMarco headed, Faith United Against Tobacco, is credited with lobbying for steeper cigarette taxes and other government controls on the tobacco industry.

As the White House put the finishing touches on President Barack Obama’s executive orders and legislative proposals aimed at restricting access to some weapons and keeping guns out of the hands of people who pose a danger to others, DeMarco on Jan. 15 released a letter to members of Congress. Many of its signers, who included Christian, Jewish, Muslim and Sikh faith leaders, flanked him at the news conference.

In light of the recent killings of 20 children and six adults in Newtown, Conn., as well as mass shootings in Aurora, Colo., Tucson, Ariz., Fort Hood, Texas, Virginia Tech University, Columbine, Colo., and Oak Creek, Wis., “we know that no more time can be wasted,” said the letter from more than four dozen religious leaders. 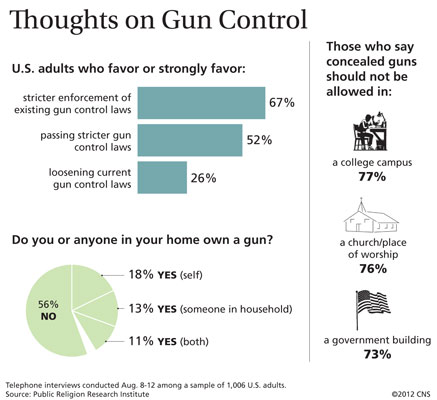 Another participant in the news conference, Sister Carol Keehan, a Daughter of Charity who heads the Catholic Health Association, said she personally saw in hospital emergency rooms the lethal effects of easy access to guns. She told of gangs that would drop off gunshot-wounded members at the hospital, of in-hospital attempts at retribution and of shootings on hospital grounds.

Sister Carol said assault weapons and high-capacity ammunition magazines “have no valid uses off the battlefield.”

Faith leaders were part of the consultation process over which Vice President Joe Biden presided in the weeks before Obama signed executive orders Jan. 16 and outlined legislation he wants Congress to pass.

That includes: laws requiring background checks on all gun sales; reinstating the ban on assault weapons; limiting the size of ammunition magazines and banning armor-piercing bullets; confirming a new director of the Bureau of Alcohol, Tobacco, Firearms and Explosives; and penalizing people who help criminals get guns.

Obama also signed orders calling for efforts by his administration that include: federal research into gun violence and gun safety systems; better sharing of background check information; improvements in how mental health problems are diagnosed and treated; and training and support for improved school security.

In announcing the efforts, Obama said he wasn’t threatening the Second Amendment rights of “responsible, law-abiding gun owners … who cherish their right to bear arms for hunting, or sport, or protection, or collection,” but was protecting more basic rights.

“As Americans, we are endowed by our creator with certain inalienable rights that no man or government can take away from us,” Obama said. “But we’ve also long recognized, as our founders recognized, that with rights come responsibilities. Along with our freedom to live our lives as we will comes an obligation to allow others to do the same.”

He also said “the most fundamental set of rights, to life and liberty and the pursuit of happiness” were denied to college students at Virginia Tech, high school students at Columbine, and elementary school students in Newtown, “and kids on street corners in Chicago on too frequent a basis to tolerate.”

In a meeting Jan. 9 at the White House, representatives of many of the same organizations that signed the Faiths United letter talked about their faiths’ efforts at combatting violence, said Kathy Saile, director of domestic social development for the U.S. Conference of Catholic Bishops, who attended.

She said the participants approached the issue with the idea of offering a moral voice to a debate that has included gun-rights activists, producers of violent video games and programming, victims of violence, educators and others. “There was huge emphasis on the protection of life,” she said.

Biden joined the meeting unexpectedly and among other points, told participants he had discussed the issue with Cardinal Timothy M. Dolan, ofNew York, president of the USCCB.

Cardinal Dolan told Catholic News Service in an email reply to questions that among other topics covered with Biden, the USCCB would be available to assist in “the fight for greater gun control in the country.”

He added that theU.S.and global church’s long-held advocacy for gun control is “really a pro-life position.”

“The unfettered access to assault weapons and handguns, along with the glorification of violence in our ‘entertainment’ industry — whether in movies, on television, or in video games — is really all part of a culture of death, as Blessed John Paul II called it.”

Other bishops and Catholic institutions also have come out with statements supporting gun controls.

In a Dec. 26 statement, Bishop Patrick J. McGrath ofSan Jose,Calif., said calls by the National Rifle Association to put armed guards in every school are “an invitation to a domestic form of ‘mutual assured destruction.'”

Just as disarmament has long been the course sought by world powers to defuse the arms race, “it is time now for radical change toward strict gun control, for another form of disarmament,” he wrote. “It is time to admit that the free availability of guns and ammunition poses a threat to the welfare of our people and that a culture of violence has eclipsed ‘life, liberty and the pursuit of happiness’ as enduring values of this nation.”

The National Catholic Educational Association, which represents 200,000 Catholic educators, issued a statement Jan. 17 adding its support to those who are working to eliminate “all types of violence,” as well as those supporting a ban on sale and possession of military assault weapons, and “for the promotion of programs that provide mental and emotional health resources, sensible safety instruction, and support healthy families.”