“The Good Pope: The Making of a Saint and the Remaking of the Church — The Story of John XXIII and Vatican II” by Greg Tobin.

“The Good Pope” is both a well-written and thoughtful biography of Pope John XXIII, and a helpful study of the events, personalities and issues of the Second Vatican Council. This timely book coincides with the 50th anniversary of the opening of the council (1962-65) and serves as an accessible work of church history.

Tobin clearly admires Angelo Roncalli, the son of a large, impoverished Italian farming family who grew up “surrounded by God and church” and, from his childhood, had a clear sense of vocation. “I can’t remember a time,” he later wrote, “when I did not want to serve God as a priest.”

One of the pleasures of this biography is the way Tobin illustrates the growth of that call, the maturation of the man through his education in Bergamo and Rome and the formative 10 years he spent as priest-secretary to Bergamo Bishop Giacomo Maria Radini-Tedeschi. His mentor “taught him that there was a way to apply changes within the church while preserving older traditions.”

Father Roncalli’s personality, and thus his priesthood, was shaped by prayer, theology and church politics. Equally definitive were lessons he wrested from his immersion in the enormous challenges and sufferings of the first half of the 20th century. He served as a medical orderly and chaplain in the Italian army during World War I and, after the war, was assigned to the Society for the Propagation of the Faith. 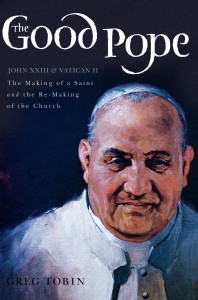 In 1925, he was appointed an archbishop and named apostolic visitor to Bulgaria, a largely Orthodox country with a small Catholic population. “Already bearing within his heart the seeds of ecumenism … (Roncalli) understood that he needed to approach the Orthodox faithful in a spirit of love and respect rather than condemnation.”

Ten years later he was appointed apostolic delegate to Turkey and Greece, but “as the world headed toward another great war, with Italy one of the aggressors, suspicions fell harder on the church in Rome and its powerful prelates.” These assignments honed Archbishop Roncalli’s diplomatic skills, and the war years saw him engaged in heroic charity, particularly in assisting Jewish immigration to Palestine.

His most important diplomatic role was the years (1944-1953) he spent as the apostolic nuncio to France. In 1953 he became the cardinal of Venice, and the five years he spent there were “perhaps the happiest time in his life. … He was finally able to realize his long-held desire to be, above all, a priest and minister of souls.”

Cardinal Roncalli was 76 when he was elected pope Oct. 20, 1958, and, because of his age some regarded him as a transitional pope. But, as Tobin makes clear in the second half of this book, John XXIII “wasted no time” and entered his papacy with a “full agenda.”

Tobin provides a straightforward chronology of John XXIII’s remarkable papacy. He outlines the themes, and reception, of his eight encyclicals and writes about the pope’s urgent concerns about international conflict and the proliferation of nuclear weapons.

The majority of this section is, appropriately, given over to a discussion of the first session of Vatican II, the only one John XXIII saw before his death June 3, 1963. Tobin explains doctrinal and theological issues and illustrates the contentious atmosphere between liberals and conservatives in the council. His factual and nonpolemical discussion is particularly welcome.

“The Good Pope” concludes with a moving narrative of John XXIII’s dying and the outpouring of love and grief that accompanied him on this final stage of his journey. His last clear words were those of St. Peter: “Lord, you know that I love you.”

Angelo Roncalli’s love for God was the luminous thread in his extraordinary life and Greg Tobin shows us how that love was made manifest. The result is a book that is not only a fine biography but an edifying meditation on a life of fidelity and surrender.

Linner is a freelance reviewer and writer.

NEXT: Special effects help retell stories of ‘The Bible’ in new miniseries