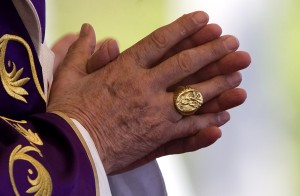 The fisherman’s ring — the pope’s signet — is seen on the right hand of Pope Benedict XVI as he celebrates Mass in Havana, Cuba, March 28, 2012. When a pope dies or resigns the ring is destroyed in a special ceremony, usually carried out in private. (CNS photo/Alessia Giuliani, Catholic Press Photo)

Click here to see the graphic Inside the Conclave

VATICAN CITY (CNS) — Ambrogio Piazzoni, vice prefect of the Vatican Library and author of the book, “History of Papal Elections,” shared facts and curiosities with journalists at the Vatican Feb. 20:

— Electing a pope is the main and most serious responsibility of members of the College of Cardinals. In the last several hundred years, Piazzoni said, cardinals have missed a conclave only if they were seriously ill or if they were impeded from traveling to Rome by their governments.

— The upcoming conclave to elect a successor to Pope Benedict XVI “will be, technically speaking, the 75th conclave” in the history of the church, he said. He dates the conclaves — elections conducted while the cardinal-electors were closed off in a room — to Pope Boniface VIII, who was elected in 1295 and inserted the conclave rules into the Code of Canon Law.

— During World War II, Pope Pius XII, like several of his predecessors who were popes in times of war, left a document informing the College of Cardinals that if he were taken prisoner, he was no longer to be considered the pope, so the cardinals were to hold a conclave and elect a new pontiff.

— Pope Gregory XV, elected in 1621, was the last pope to be elected by “spontaneous acclamation” when all the cardinals, believed to be acting under the influence of the Holy Spirit, proclaim the same candidate to be pope. Piazzoni said almost immediately after taking office, Pope Gregory changed the conclave rules to require that such a “spontaneous acclamation” be confirmed immediately with a written ballot in the conclave.

He also was first to rule that the cardinals must cast their votes secretly, in writing, rather than verbally.

— Election by acclamation is no longer considered valid, nor is the “election by compromise” in which the cardinals, after a stalemate, unanimously decide to choose a few of their members and delegate to them the power to elect a pope. The last pope elected with that method, Piazzoni said, was Pope Clement IV in 1265 who was elected by two cardinals.

— Pope Paul VI was the pope who clarified the exact moment when a candidate becomes pope: It is the moment he accepts his election, as long as he previously had been ordained a bishop. If the cardinals choose someone who has never been ordained a bishop, the ordination takes place immediately, then the election as pope becomes valid.

— When Blessed Gregory X was elected by a cardinals meeting in Viterbo, Italy, in 1271, he was not present and he was not even a priest yet.

— Pope Nicholas II, who served in 1059-61, was the pope who ruled that only cardinals were eligible to vote to elect a pope.

— “To put an end to discord” created when two or more candidates received a similar number of votes, Pope Alexander II in 1169 established the rule that a candidate must receive a two-thirds majority to be elected.

— Pope John Paul II was the first pope to specify that a conclave must take place in the Sistine Chapel. Previous popes recommended the chapel, but throughout history the conclaves have been held in a variety of churches in Rome and elsewhere.

NEXT: Papal biographer: Fixing Vatican bureaucracy is a top job for next pope