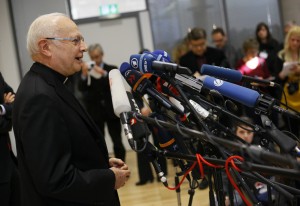 Archbishop Robert Zollitsch of Freiburg, president of the German bishops’ conference, addresses the media before the prelates’ annual meeting in Trier Feb. 18. The German bishops said the morning-after pill can be given to rape victims at church-run hospitals, in line with “medical, psychological and emotional care” requirements. (CNS photo/Wolfgang Rattay, Reuters)

VATICAN CITY (CNS) — The Catholic Church has long accepted the possibility of preventing ovulation in a woman who has been raped, but withdraws that option if there is a possibility that ovulation may have already occurred, said the president of the Vatican’s Pontifical Academy for Life.

A recent statement by bishops in Germany saying it was acceptable to use medication that hinders conception after rape reflects an “unassailable rule” that has been proposed by the Catholic Church the past 50 years, said Bishop Ignacio Carrasco de Paula.

“To consider the possibility of using a drug whose active ingredient is a contraceptive in the case of a woman who has been raped seems acceptable to me,” he told “Vatican Insider,” the online news supplement to the Italian newspaper La Stampa.

The church, however, refuses the administration of an abortive drug in all cases, he said on the sidelines of a workshop, Faith and Human Life, sponsored by the academy Feb. 22.

“In the case of rape, one can do what is necessary to avoid a pregnancy, but you cannot terminate it,” the bishop said.

Richard Doerflinger, associate director of the U.S. bishops’ Secretariat for Pro-Life Activities and a member of the pontifical academy, told Catholic News Service that “you are not violating the teaching on contraception by seeking to stop ovulation or fertilization.”

Rape “is not an act of unitive love, it is an act of violence (and) the woman has a right to defend herself against this attack,” he said.

However, “once a new life has been conceived, now you have a second innocent victim, and you don’t attack that victim” by administering drugs with abortive effects like preventing implantation, he said.

Bishop Carrasco and Doerflinger agreed that it is up to doctors and scientists, not the church, to determine if a drug’s effect will be contraceptive or abortive.

“That’s something that we hope that research can clarify in the future, but the prospect of being sure about this is very limited,” he said.

“The Catholic doctor has to study the evidence that’s out there and make a responsible decision,” he said. “If there’s serious evidence that the abortifacient effect is there, our moral approach should be to not risk the destruction of life.”

In a Feb. 21 statement, the German bishops said morning-after pills, sometimes called “Plan B,” can be dispensed at church-run hospitals to prevent rape victims from becoming pregnant.

“Women who have been victims of rape will, of course, receive human, medical, psychological and pastoral help in Catholic hospitals — this can include administration of the ‘morning-after pill’ as long as it has a preventive rather than abortive effect,” the bishops’ conference said Feb. 21.

“Medical and pharmaceutical methods that result in the death of an embryo may still not be used. The German bishops trust that, in facilities run by the Catholic Church, decisions on practical treatment will be based on moral and theological guidelines. In every case, the decision of the woman concerned must be respected.”

The statement was issued at the close of the bishops’ four-day spring plenary in Trier.

It said a “moral and theological evaluation” of the morning-after pill had been provided by Cardinal Karl Lehmann of Mainz, president of the bishops’ commission for doctrine and faith, “on the basis of scientific findings.”

However, it added that the bishops would continue studying the issue and making “necessary differentiations” with “those responsible in Rome,” as well as holding talks with Catholic hospitals, gynecologists and consultants.

Controversy erupted over German church attitudes to rape victims in December, after a 25-year-old was referred by her doctor to two Catholic clinics in Cologne after being drugged at a party and suffering suspected rape.

However, doctors refused to treat her, claiming this would require using the morning-after pill, often taken after sex to avoid pregnancy.

The woman was later treated at a Protestant-run hospital.

In a Jan. 22 statement, Cologne Cardinal Joachim Meisner apologized for the clinics’ “shameful failure” to care for the woman, adding that it contradicted the church’s “Christian mission and purpose.”

In a further statement Jan. 31, the cardinal said he believed it was acceptable in Catholic teaching to use “a medication that hinders conception after a rape with the aim of avoiding fertilization.”

However, the cardinal’s office said the observation applied only to rape cases, not Catholic marriages, and said there had been “no change” in the German church’s condemnation of “abortion pills” based on the drug mifepristone.

Church spokesmen said the bishops’ plenary would debate the issue to clear up misunderstandings in the German church, which runs a quarter of all hospitals in the country and half in the Cologne region.

As early as 1985, British and Irish bishops approved application of the treatment when physicians determined rape victims had not ovulated.

In 2001, the U.S. Conference of Catholic Bishops issued directives for Catholic health care that said raped women could be treated with “medications that prevent ovulation, sperm capacitation or fertilization” when conception had not occurred, but ruled out treatments aimed at “the removal, destruction or interference with the implantation of a fertilized ovum.”

Catholic bishops and hospitals in several states have agreed to comply with state laws that required them to administer the morning-after pill in cases of rape.

Contributing to this story was Jonathan Luxmoore in Warsaw, Poland.

PREVIOUS: Papal biographer: Fixing Vatican bureaucracy is a top job for next pope

NEXT: Pope accepts cardinal’s resignation; Scot to stay away from conclave