Pope accepts cardinal’s resignation; Scot to stay away from conclave 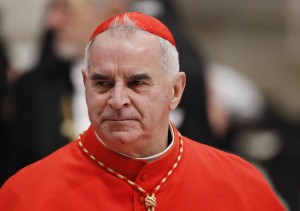 Cardinal Keith O’Brien of St. Andrews and Edinburgh, Scotland, announced Feb. 25 that he will not participate in the conclave to elect Pope Benedict XVI’s successor. His resignation was accepted by the pope Feb. 18. (CNS photo/Paul Haring)

VATICAN CITY (CNS) — Scottish Cardinal Keith O’Brien, 74, announced he would not participate in the conclave to elect Pope Benedict XVI’s successor because he did not want media attention focused on him instead of the election of a new pope.

The British newspaper The Observer reported Feb. 23 that three priests and a former priest had accused the cardinal of “inappropriate conduct” with them going back to the 1980s. Father Lombardi had told reporters Feb. 24 that Pope Benedict had been informed about the accusations and “the issue is now in his hands.”

Cardinal O’Brien, 74, has denied the allegations and, according to his spokesman, is seeking legal advice.

Father Lombardi said Feb. 25 that Cardinal O’Brien, who was required by church law to offer his resignation before his 75th birthday in March, had presented his letter to the pope in November. In accepting the resignation, the pope did not give any order about whether the cardinal could participate in the upcoming conclave to elect his successor, Father Lombardi said.

In a statement distributed by the Catholic Media Office in Glasgow, Cardinal O’Brien said, “I also ask God’s blessing on my brother cardinals who will soon gather in Rome to elect his successor. I will not join them for this conclave in person. I do not wish media attention in Rome to be focused on me — but rather on Pope Benedict XVI and on his successor. However, I will pray with them and for them that, enlightened by the Holy Spirit, they will make the correct choice for the future good of the church.”

Under the rules governing the conclave, all cardinals under the age of 80 “are required, in virtue of holy obedience, to obey the announcement of convocation and to proceed to the place designated for this purpose, unless they are hindered by sickness or by some other grave impediment, which, however, must be recognized as such by the College of Cardinals.”

Including Cardinal O’Brien, there are 117 cardinals who will be under age 80 Feb. 28 and eligible to vote in the conclave. Indonesian Cardinal Julius Darmaatmadja, the 78-year-old retired archbishop of Jakarta, already has said he will not attend because of health.

The allegations against Cardinal O’Brien came a day after the Scottish cardinal gave an interview to the British Broadcast Corp. in which he expressed his openness to a change in the discipline of mandatory celibacy for Latin-rite Catholic priests.

“Basic dogmatic beliefs” that have a “divine origin,” like the sanctity of human life from conception to natural death, cannot be changed by any pope, he said in the interview Feb. 22 with BBC Scotland.

Other church practices, “for example, the celibacy of the clergy,” could change, said the cardinal.

“There was a time when priests got married, and of course we know at the present time in some branches of the church,” including many Eastern Catholic churches and in the ordinariates for former Anglicans, “priests can get married, so that is obviously not of divine of origin and it could get discussed again,” he said.

The cardinal told the BBC he never personally thought about whether he wanted to get married, but “I would be very happy if others had the opportunity of considering whether or not they could or should get married.”

“I realize that many priests have found it very difficult to cope with celibacy as they lived out their priesthood and felt the need of a companion, of a woman, to whom they could get married and raise a family of their own,” he said.

Cardinal O’Brien also has been an outspoken opponent of attempts in the United Kingdom to legally redefine marriage. In 2012, he said civil partnerships introduced by the government in 2004 already conferred many of the rights of marriage on homosexual couples.

The government, he had said, was allowing “a small minority of activists” to redefine marriage for the whole of society.

NEXT: Former doctrinal enforcer used pontificate to crack down on sex abuse