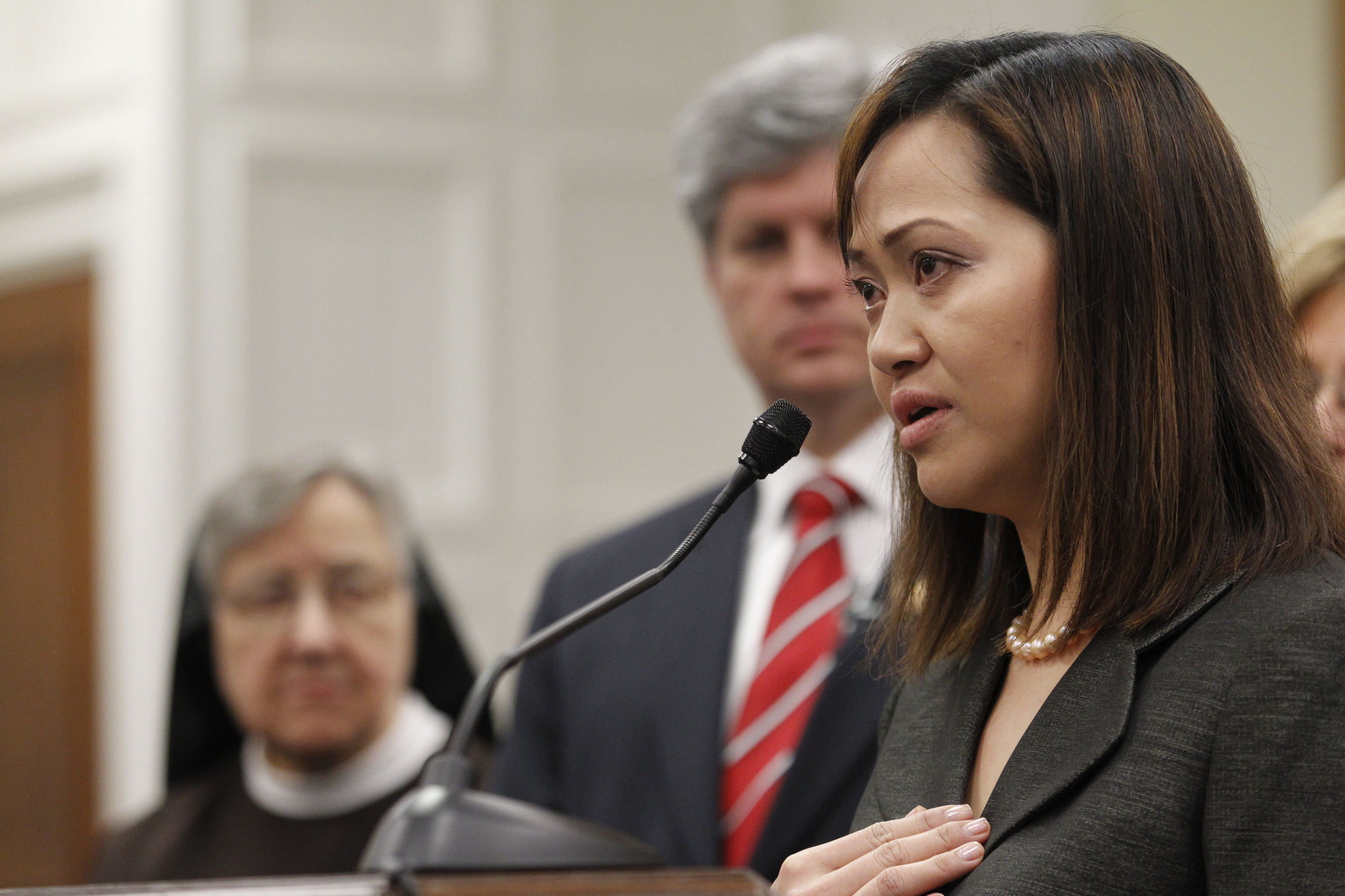 WASHINGTON (CNS) — Three Republican members of the House of Representatives March 5 introduced a bill to protect conscience rights for both workers in the health care industry and for employers in light of the federal mandate requiring employers to cover contraceptives, sterilization and abortion-inducing drugs.

One of the sponsors, Rep. Diane Black, R-Tenn., said it is possible that the bill, the Health Care Conscience Rights Act, could be folded into a continuing resolution being considered by the House to keep the federal government operating beyond March 27.

Two Catholic women who run businesses and who appeared at a March 5 news conference on Capitol Hill said they do not want to be forced to choose between their conscience or their business.

“Nobody should be asked to make that decision,” said Christine Ketterhagen, a co-owner of Hercules Industries, a heating and air conditioning company her father founded in Denver 50 years ago that now has operations in five states with 320 employees.

Sister Jane Marie Klein, a Franciscan Sister of Perpetual Adoration who is chairperson of the board of Franciscan Alliance, a Midwestern hospital group with 13 hospitals and 3,500 beds that provides an estimated $171.5 million in charity care and community outreach, told CNS, “All I can say is that we will not violate our conscience.”

“I don’t want to deal with” the possibility that the chain could be shut or sold, she added, saying she was counting on “good and faithful” people to “uphold our God-given rights.”

Sister Jane Marie said, “God is good. He’s still in charge. I think he’s going to see us through this. We have sisters who are praying 24 hours a day, seven days a week for this — along with the election of a new pope right now.”

The Health Care Conscience Rights Act would offer a full exemption from the U.S. Department Health and Human Services’ mandate for individuals and health care entities that refuse to provide, pay for, or refer patients to abortion providers because of their religious beliefs. The bill had attracted 50 co-sponsors by the time of its introduction.

The bill would have given recourse to one Catholic nurse forced to participate in a 2009 abortion. Cathy Cenzon-DeCarlo was an operating room nurse in a New York hospital. “They threatened my job and my nursing license” if she did not participate in the abortion, she said.

“I still remember the 22-week-old baby,” Cenzon-DeCarlo said. “I had to account for its twisted arms and legs and feet,” she added. “I’ve had nightmares.”

She filed suit in both state and federal courts, but was told that, even if her being forced to participate in the abortion was illegal, she had no standing to sue.

Other nurses have been victimized for their beliefs. “Because of my Christian beliefs, I have been laughed at, marginalized and had loss of employment,” said Susan Elliott, director of the nursing department at Biola University in California, at the press conference.

Rep. John Fleming, R-La., a co-sponsor of the bill, told the story at the news conference of nine nurses at an unnamed hospital who had lost their jobs for their refusal to participate in abortions. “The nine nurses got their jobs back,” Fleming said, “but only after help from their unions.”

“I welcome the Health Care Conscience Rights Act and call for its swift passage into law,” said a March 5 statement by Archbishop William E. Lori of Baltimore, chairman of the U.S. bishops’ Ad Hoc Committee for Religious Liberty.

“While federal laws are on the books protecting conscience rights in health care, this act would make such protection truly effective,” Archbishop Lori said. “This overdue measure is especially needed in light of new challenges to conscience rights arising from the federal health care reform act.”

On Feb. 1, HHS issued proposed new rules on the mandate aimed at accommodating objections raised by Catholic institutions that, among others, the exemption for religious employers was too narrow and that most would be forced to stop providing employee health insurance because they object on moral grounds to the requirement they cover contraception, sterilization and abortion-inducing drugs.

HHS removed three conditions that defined religious employers — as groups whose purpose is the inculcation of religious values, who primarily employ persons of the same faith and who serve those of the same faith. The fourth criterion remains: what is a nonprofit organization under specific sections of the Internal Revenue Code.

No exemption, however, will be given to “for-profit, secular employers” whose owners have moral objections to providing the coverage.

At the Capitol Hill news conference, the speakers all decried a threat to conscience rights. Sister Jane Marie said her order had come from Germany to the United States 130 years ago in part because of an invitation by a bishop, but also in part because of restrictions to religious freedom being applied then in Germany.

“In the Philippines, I grew up under the (Ferdinand) Marcos regime, where people were afraid to voice their opinions,” said Cenzon-DeCarlo, adding she did not know until she woke up each day whether her father, a Marcos opponent, had been kidnapped.

Cenzon-DeCarlo became a U.S. citizen in 2011 because of the nation’s constitutional guarantees of religious freedom and freedom of conscience. But with the HHS mandate, she said, it is “not the America of my dreams.”

You can make your voice heard in the debate over the HHS mandate. A tool from the Pennsylvania Catholic Conference makes it easy to send a message to legislators in support of the newly introduced legislation.

NEXT: CCHD awards $800,000 to three groups working on immigration reform