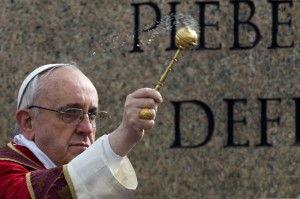 VATICAN CITY (CNS) — Pope Francis celebrated his first Palm Sunday Mass as pope March 24, telling an overflow crowd in St. Peter’s Square that Christ’s death on the cross is a source of eternal consolation and joy.

As he has done with striking frequency since his election March 13, Pope Francis warned against the action of the devil, who he said comes to discourage believers in times of trouble, “often disguised as an angel who insidiously tells us his word. Do not listen to him.”

Recalling Jesus’ triumphant arrival in Jerusalem, acclaimed as a king only days before his crucifixion, the pope stressed the otherworldly nature of Christ’s reign.

“A Christian can never be sad. Never give way to discouragement,” the pope said.

“Jesus does not enter the Holy City to receive the honors reserved to earthly kings, to the powerful, to rulers; he enters to be scourged, insulted and abused,” Pope Francis said. “His royal throne is the wood of the cross.”

“Jesus takes upon himself the evil, the filth, the sin of the world, including our own sin,” the pope said, “and he cleanses it, he cleanses it with his blood, with the mercy and the love of God.”

“Christ’s cross embraced with love does not lead to sadness, but to joy,” he said.

Pope Francis characteristically strayed from his prepared text in a personal aside when deploring the sin of greed, adding that money is something “no one can bring with him. My grandmother would say to us children, ‘No shroud has pockets.'”

Noting that “for 28 years Palm Sunday has been World Youth Day,” the pope told young people in the congregation that “you bring us the joy of faith, and you tell us that we must live the faith with a young heart, always, even at the age of 70 or 80.”

Pope Francis confirmed that he would attend the July 2013 World Youth Day celebrations in Rio de Janeiro, saying, “I will see you in that great city in Brazil.” Though the announcement was widely expected, it drew applause from the crowd in the square and the avenue beyond.

Before the Mass, young people carrying woven palm fronds led a procession that included bishops, cardinals and Pope Francis in the popemobile. They processed to the ancient Egyptian obelisk in the center of the square, where the pope blessed palm and olive branches held up by members of the congregation.

After Mass, before praying the Angelus from the altar set up in front of the basilica, the pope made special mention of “people afflicted with tuberculosis, as today is the world day against this disease.”