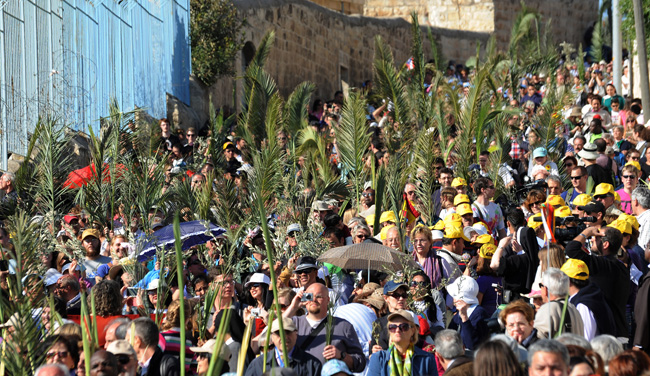 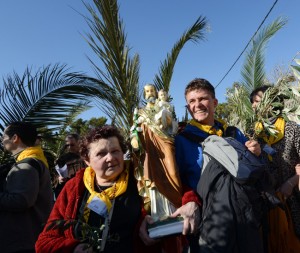 Christians carry olive branches and a statue of Jesus during the traditional Palm Sunday procession March 24 on the Mount of Olives overlooking the Old City of Jerusalem. (CNS photo/Debbie Hill)

JERUSALEM (CNS) — The winding road from the Mount of Olives to the streets of the Old City of Jerusalem was alive with music and song in many languages as global pilgrims joined local Christian Palestinians in the traditional Palm Sunday procession commemorating Jesus’ entry into the city.

“This is the only day in the year we as Christians can close the roads of Old Jerusalem,” said 44-year-old George Khoury, a Jerusalem Catholic.

Khoury and his wife took pictures of a group of singing and dancing Filipino workers from Jaffa’s St. Anthony Parish who were playing guitars and waving palm fronds as the colorful procession began.

“We are happy to see international groups come to share this with us, supporting us here,” he said.

Khoury said every year the couple brings their three children — now 5, 7 and 14 — to show them how special it is to have been born and to live in the city where Jesus died and rose from the dead. He said he hoped when they are older they will realize how important it is for them to remain in the Holy Land.

A man leading a group of Protestant pilgrims from South Korea did circular half-leaping steps and beat on a traditional metal drum with a large drumstick trimmed with white macrame and yellow and pink yarn. A young boy carried a large double-sided wooden drum across his chest, keeping time with the pilgrims, who were singing hymns in their language.

Polish pilgrims sang as they walked. French pilgrims carrying palm fronds and olive branches sang quietly as the procession wound three miles, down the hillside of the Mount of Olives, along a path that edged an ancient Jewish cemetery. The Old City walls loomed ahead as pilgrims descended to the Kidron Valley, with the golden Muslim Dome of the Rock shrine commanding the horizon.

Several thousand Christians took part in the procession. Representatives of local Palestinian parishes carried banners bearing the word “Palestine,” the name of their parish, and their distances from Jerusalem. They also carried a banner replica of an Israeli Civil Administration travel permit that Christian Palestinians living in the West Bank need in order to enter Jerusalem during Easter.

“I am one of the lucky ones who has the privilege to enter Jerusalem to participate in the procession,” said Maha Sleiby, 27, a Catholic from Bethlehem, West Bank, who said she had not been able to come for several years because she had not received a permit. “It means a lot to be able to be here and pray together with all fellow Palestinians and Christians from all over the world.”

Though Palestinians claimed that only half of the 50,000 permit requests were approved by Israel, the Israeli government said it rejected only 192 of the 19,000 requests it had received — because of security reasons.

This year most of the Catholic Church in the Holy Land took the official initiative to celebrate Easter on the Greek Orthodox date, May 5, 35 days after the date celebrated by Catholics and Protestants worldwide. Though many parishes have already been celebrating the holiday together, following a directive from the Assembly of Catholic Ordinaries of the Holy Land, within two years all Eastern Catholics and the Latin Patriarchate in the Holy Land will officially adopt the Greek Orthodox Julian calendar date.

It is important for the Christians to celebrate their holidays together and be united because they are a small minority, said Alaa Odeh, 32, a Catholic from Nazareth, but he noted that the big gap between the dates this year has created some divisions.

“In past years it has been OK (to celebrate on the Greek Orthodox date,)” he said. “But this year it makes for more division because there is usually only one week difference.”

Norwegian Lutheran Gudrun Bertinussen, 41, who has been working with a Christian humanitarian aid organization in Jerusalem for two years and was at the procession with her 6-year-old daughter, said she appreciated being able to share traditions with Christians from different churches.

Taking part in the procession for a second year in a row, Faryh Diaz, 58, of Del Carmen Parish in Mayaguez, Puerto Rico, said she had returned with her husband and friends because celebrating Holy Week in the Holy Land was so meaningful to her.

“Being here, where Jesus walked, this the place where it happened: You feel it live,” she said.

German Catholic Philipp Mussenghoff, 31, and his wife Christiane, 34, said they hoped taking part in the Palm Sunday procession in the Holy Land would help bring the Bible to life for their 4-year-old twin sons, Kurt and Theo.

For Lucille Lampard, 54, of St. Francis of Xavier Parish in New Orleans, participating in the procession was an opportunity to grow in her faith and to know Jesus at a more personal level.

“How sad he must have felt in his heart knowing that his Passion was coming,” she said. “It helps me to better understand that we all need to go through suffering to encounter Christ. … It gives me the awareness that we are called to behave with extreme charity, giving of ourselves to others with peace and joy. Seeing all these people here is an affirmation of my faith. Jesus lives on in every one of them.”