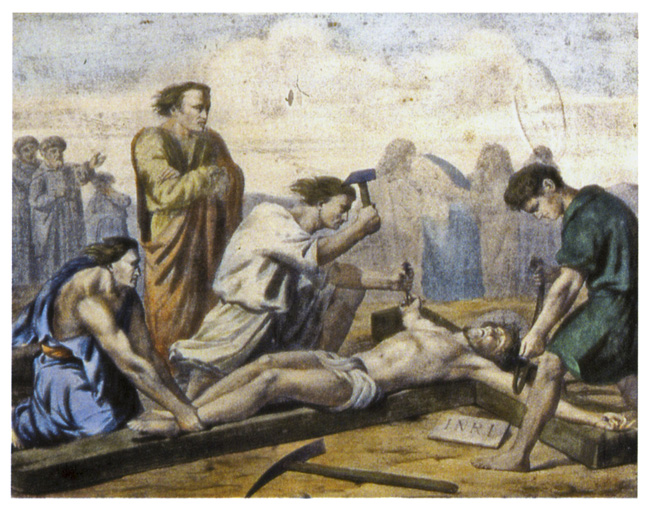 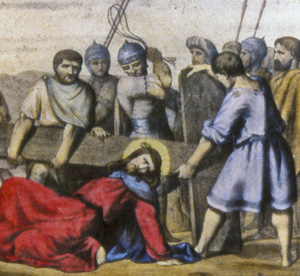 Jesus falls the first time, the third Station of the Cross, is depicted in the prayer book for the Way of the Cross service on Good Friday at Rome’s Colosseum. (CNS)

VATICAN CITY (CNS) — Meditating on Christ’s passion and the ways people contribute to his suffering, Lebanese youths lamented the ongoing emigration from and violence in the Middle East, divisions among Christians, the abuse of women and children, and the promotion of abortion.

But despite the hardships, horrors and despair, Christians are called to walk with Christ because “suffering, embraced in faith, is transformed into the path to salvation,” the youths said in meditations for the March 29 Way of the Cross service at Rome’s Colosseum.

Christians can find hope in bearing their burdens because Christ is with them. However, acceptance does not mean putting an end to one’s dreams, to speaking out and fighting for freedom and the truth, the reflections said.

“God does not want suffering and does not accept evil,” the text said. In fact, people can carry the cross with joy and hope because Christians know Christ “triumphed over death for us.”

A group of Lebanese young people wrote the meditations at the request of retired Pope Benedict XVI; the Vatican released the published text with commentary and prayers on the 14 Stations of the Cross March 25.

Each year, the pope chooses a different person or group of people to write the series of prayers and reflections that are read aloud during the solemn, torch-lit ceremony.

The retired pope asked Lebanon’s Maronite Patriarch Bechara Rai to choose the youths and guide their preparation of the texts. The retired pope’s request was meant to recall his 2012 visit to Lebanon and invite the whole church to pray for the Middle East — its tensions and its beleaguered Christian community.

The task of composing the 14 meditations was divided equally among committees from the six rites of the Catholic Church represented in Lebanon: Latin, Maronite, Melkite, Armenian, Syriac and Chaldean. In addition, six Catholic youth groups, a special needs group and a nongovernmental organization were randomly chosen and assigned a station to focus on.

Participants said they tried to show the biggest challenges facing young people in the Middle East and elsewhere while also showing the Christian vision of hope and resurrection.

Each reflection begins with a passage or verse from the Bible. The accompanying meditation is based on Pope Benedict’s apostolic exhortation on the church in the Middle East “Ecclesia in Medio Oriente” or references to liturgical texts and writings from the Eastern Catholic churches, saints or theologians.

Each meditation is followed by a prayer and illustrated with a color reproduction of a Via Crucis design by an unknown 19th-century Palestinian Franciscan artist; the artist’s work is found in Bethlehem.

In the group’s meditation on the first station — “Jesus is condemned to death” — it said the world is filled with many Pontius Pilates who use their position of power to serve the mighty rather than to serve justice, the right to life and human dignity.

The prayer accompanying the second station — “Jesus carries his cross” — remembers all those who are humiliated and suffering, particularly in the Middle East, because of “blind secularism” that shuts out moral values or “violent fundamentalism,” which tries to justify itself by claiming it is motivated by the defense of religious values.

The seventh station — “Jesus falls for the second time” — reflects on how prejudice and hatred can lead to hardened hearts and religious strife. The prayer calls for enlightened consciences that learn to respect legitimate human differences and uphold religious freedom.

The eighth station — “Jesus meets the women of Jerusalem, who weep for him” — considers all women who are oppressed and “violated by discrimination, injustice and suffering,” so that they may “open their eyes to the paschal truth,” and find peace and healing.

The ninth station — “Jesus falls for the third time” — laments the “mentality of division,” especially among Christians and calls on God to grant people the “wisdom and humility” to seek unity “in truth and love.”

The 10th station — “Jesus is stripped of his garments” — urges God to help stem the tide of emigration spurred by numerous difficulties and persecution and asks God to give his children of the Eastern churches in the Middle East “the courage to stay in their countries to proclaim the Good News” that Jesus is “the one true God.”

The 12th station — “Jesus dies on the cross” — recalls that death will never have the final word and asks that “all those who promote abortion realize that love can be nothing more than the source of life.”

It also asks for a change of heart of all those who defend euthanasia and other procedures that put human life in danger. May everyone work to “build a civilization of life and love,” it said.

NEXT: From Mount of Olives to Jerusalem, world’s Christians mark Jesus’ entry