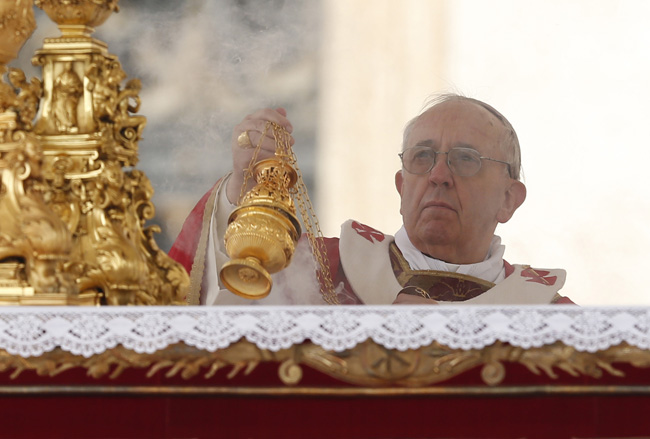 VATICAN CITY (CNS) — The Vatican confirmed Pope Francis will lead a full slate of Holy Week and Easter liturgies in Rome and at the Vatican, keeping pace with a usually busy papal schedule.

The Vatican republished the pope’s program March 25, updating a schedule they had released Jan. 29. The only major changes were the name of the pontiff presiding over the ceremonies and the new pope’s recent decision to celebrate the Holy Thursday Mass of the Lord’s Supper in a Rome juvenile detention facility rather than in St. Peter’s Basilica.

The updated schedule starts with Pope Francis’ celebration of a morning chrism Mass in St. Peter’s Basilica on Holy Thursday. That evening, he will preside over the Mass of the Lord’s Supper in Rome’s Casal del Marmo Prison for minors where he will wash the feet of some of the young detainees.

On Good Friday, he will celebrate the liturgy of the Lord’s Passion in St. Peter’s Basilica in the late afternoon, and then will lead a nighttime Way of the Cross at Rome’s Colosseum.

The meditations to be read during the Way of the Cross were written by Lebanese Catholic youths. Retired Pope Benedict XVI had asked Lebanon’s Maronite Patriarch Bechara Rai to choose the youths and guide their preparation of the texts. The retired pope’s request was meant to recall his 2012 visit to Lebanon and invite the whole church to pray for the Middle East — its tensions and its beleaguered Christian community.

On Holy Saturday, Pope Francis will preside over the Easter Vigil in St. Peter’s Basilica. On Easter, March 31, he will celebrate Mass in St. Peter’s Square and give his blessing “urbi et orbi” (to the city of Rome and the world).

NEXT: Pope Francis to live in Vatican guesthouse, not papal apartments