Pope Francis to live in Vatican guesthouse, not papal apartments 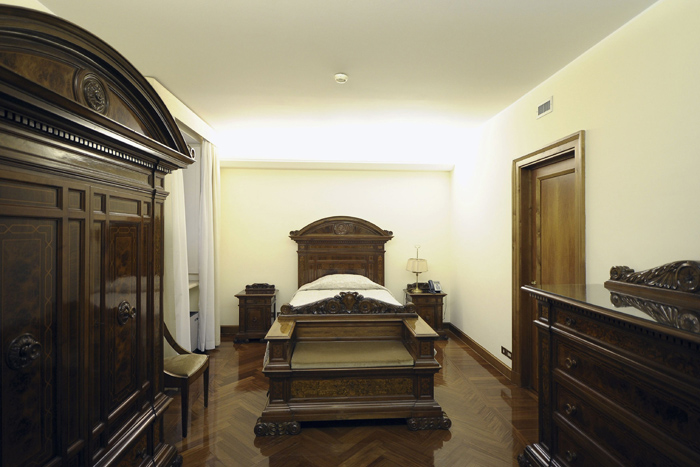 This photograph, taken March 9, shows the bedroom in the residence where Pope Francis has stayed since his election at the Vatican. The pope has decided not to move into the papal apartments in the Apostolic Palace, but to live in a suite in the Domus Sanctae Marthae, the guesthouse built in 1996 to house cardinals during a conclave. (CNS photo/L'Osservatore Romano via Reuters) 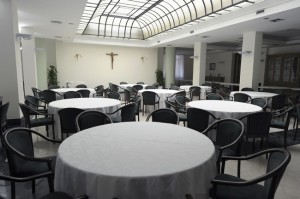 Pictured is a dining room inside the Domus Sanctae Marthae, where Pope Francis has taken his meals with others since his election March 13. (CNS photo/L’Osservatore Romano via Reuters)

VATICAN CITY (CNS) — Pope Francis has decided not to move into the papal apartments in the Apostolic Palace, but to live in a suite in the Vatican guesthouse where he has been since the beginning of the conclave that elected him, said Jesuit Father Federico Lombardi, Vatican spokesman.

“He is experimenting with this type of living arrangement, which is simple,” but allows him “to live in community with others,” both the permanent residents — priests and bishops who work at the Vatican — as well as guests coming to the Vatican for meetings and conferences, Father Lombardi said March 26.

The spokesman said Pope Francis has moved out of the room he drew by lot before the conclave and into Suite 201, a room that has slightly more elegant furnishings and a larger living room where he can receive guests.

The Domus Sanctae Marthae, the official name of the guesthouse, was built in 1996 specifically to house cardinals during a conclave.

Celebrating Mass March 26 with the residents and guests, Pope Francis told them he intended to stay, Father Lombardi said. The permanent residents, who had to move out during the conclave, had just returned to their old rooms.

Pope Francis has been there since his election March 13, taking his meals in the common dining room downstairs and celebrating a 7 a.m. Mass with Vatican employees in the main chapel of the residence.

He will be the first pope in 110 years not to live in the papal apartments on the third floor of the Apostolic Palace.

In 1903, St. Pius X became the first pope to live in the apartments overlooking St. Peter’s Square. The apartments were completely remodeled by Pope Paul VI in 1964 and have undergone smaller modifications by each pope since, according to “Mondo Vaticano,” a Vatican-published mini-encyclopedia about Vatican buildings, offices and tradition.

The large living room or salon of the apartment is located directly above the papal library where official audiences with visiting bishops and heads of state are held.

Pope Francis will continue to use the library for official audiences and to recite the Angelus prayer on Sundays and holy days from the apartment window overlooking St. Peter’s Square, Father Lombardi said.

The apartments contain a chapel, an office for the pope and a separate office for his secretaries, the pope’s bedroom, a dining room, kitchen and rooms for two secretaries and for the household staff.

When Pope Francis returned to the guesthouse after his election, Father Lombardi had said the move was intended to be short-term while a few small work projects were completed in the papal apartments. He said March 26 that all the work had been completed, but at least for the foreseeable future, Pope Francis would not move in. 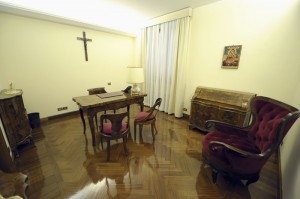 This photograph, taken March 9, shows the study in the residence where Pope Francis has stayed since his election at the Vatican. (CNS photo/L’Osservatore Romano via Reuters)

The Domus Sanctae Marthae, named after St. Martha, is a five-story building on the edge of Vatican City.

While offering relative comfort, the residence is not a luxury hotel. The building has 105 two-room suites and 26 singles; about half of the rooms are occupied by the permanent residents. Each suite has a sitting room with a desk, three chairs, a cabinet and large closet; a bedroom with dresser, night table and clothes stand; and a private bathroom with a shower.

The rooms all have telephones and access to an international satellite television system.

The building also has a large meeting room and a variety of small sitting rooms. In addition to the dining room and the main chapel, it also has four private chapels, located at the end of hallways on the third and fifth floors of each of the building’s two wings. 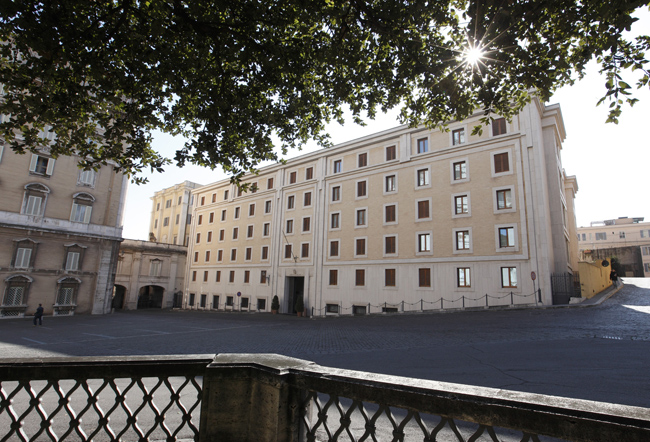 The Domus Sanctae Marthae, the residence for guests at the Vatican and now the official the home for Pope Francis, who favors it offer the traditional residence for the pope, the Apostolic Palace. (CNS photo/Paul Haring)

NEXT: Young woman’s disability makes her perfect volunteer to cheer the elderly