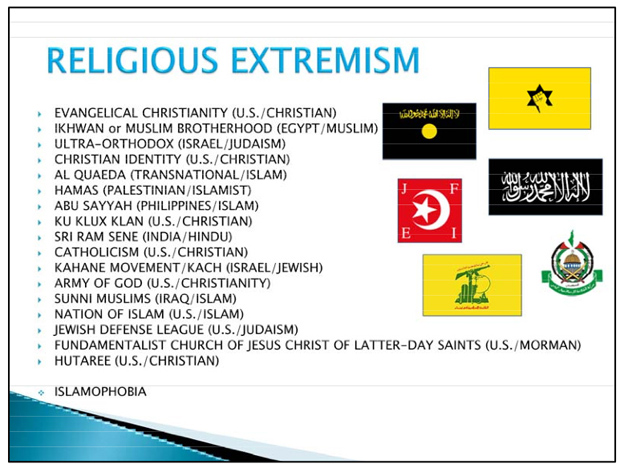 This is one of the slides that the U.S. Archdiocese for the Military Services said had appeared in a training briefing for a group of about 100 Army Reserve soldiers in Pennsylvania. It lists several faiths and religious groups, including Catholicism, under the heading "religious extremism."

WASHINGTON (CNS) — An informational slide that listed Catholicism, evangelical Christianity and other religious groups under the heading of “Religious Extremism” and was recently used in a training briefing for a group of about 100 Army Reserve soldiers has been removed from the presentation.

But the fact these groups were ever put on a list that included the Ku Klux Klan and “Islamophobia” has drawn strong criticism from the Catholic Archdiocese for the Military Services and other religious entities.

A statement from the military archdiocese, dated April 4, called on “the Department of Defense to review (the slides) and to ensure that taxpayer funds are never again used to present blatantly anti-religious material to the men and women in uniform.”

“The archdiocese is astounded that Catholics were listed alongside groups that are, by their very mission and nature, violent and extremist,” it added.

In March 2012, a soldier allegedly with the unit’s equal opportunity division included the slide in a briefing he produced and conducted for about 100 soldiers of the 316th Expeditionary Sustainment Command of the Army Reserves based in Pennsylvania.

“This soldier recognized that it was a poorly chosen analogy (and) apologized to those who took offense. … That was nearly a year ago,” he said April 10 in an emailed statement.

A source told CNS that the complaint was made, but that it took months for the U.S. Army to meet with the person who made the complaint, and that no general apology was made to all of the troops who underwent the training.

“According to people in the unit, there was never a public apology,” said Ron Crews, a retired colonel, who is executive director of the Chaplain Alliance for Religious Liberty.

The producer of the training did not apologize to all of the soldiers in the unit that incorrect information was given out and the unit has not received corrected training, he told CNS.

Meanwhile, as the whistleblower waited for a meeting with the equal opportunity division, the soldier who had given the questionable training in the first place kept giving training to other units, though it is not known if it was the exact same training that raised objections.

The Army has repeatedly noted that this was an “isolated incident,” but Crews disagreed.

“We have discovered that it wasn’t just a one-time thing, but that briefing was given to a number of Reserve units,” he said in a phone interview.

“The person who did the training was on the road through last year going to different units and presenting the same material,” he added.

Slides from the presentation posted on the Alliance Defending Freedom website show they have spelling and grammatical errors across the board, from misspelling of the word, “Morman,” to misusing the word “effect,” to leaving off letters in “linke.”

Some of the informational content itself appears largely to be copy-pasted from the website of the Southern Poverty Law Center, a civil rights organization that among other activities keeps a watch list of organizations it considers “hate groups.”

“It was sloppy … and just inaccurate,” Heidi Beirich, director of the center’s Intelligence Project, told CNS in a phone interview. “We’d like them to use our materials accurately. … We don’t want people to think we would put the Catholic Church on a hate list, because this is false and of course absurd.”

The Southern Poverty Law Center’s website does target what it calls “radical traditionalist Catholics,” who “subscribe to an ideology that is rejected by the Vatican and some 70 million mainstream American Catholics.” The center says the number of members in this “radical” movement is “tiny” and it distinguishes them from Catholic “traditionalists” who prefer the Mass in Latin.

Wright said the slide “was not produced by the Army, and certainly does not reflect our policy or doctrine. It was produced … without anyone in the chain of command’s knowledge or permission.”

According to Army Reserves media relations officer Lt. Col. Matthew W. Lawrence, “many presentations and training sessions in the Army are given without final review by an approving authority.”

This “allows for training to be more interesting, (and) … develops our personnel, their knowledge, and their skills at training and research,” he said April 17 in an emailed statement.

Because issues related to equal opportunity and sexual harassment can have a sizable impact on the Army’s liability, training in these areas is very structured and regulated with major oversight because everyone wants to know what is going on, a soldier working for the Doctrine and Training Development Division of the Army told CNS. He asked not to be identified.

But the soldier who conducted the training with the objectionable material wrote in his notes, “I’ve done hours of research,” which would indicate the training wasn’t informal since it seems to have been carefully researched on the Internet over a period of time.

The Army would not comment directly on whether the training in question was of a formal or informal nature.

“The U.S. Army Reserve Command initiated a formal — AR 15-6 — investigation which will yield more information about the presentation,” Lawrence said.

However, “we consider the matter closed,” he added, quoting a statement released earlier by Wright in the Army’s Public Affairs Office.

Crews told CNS he feels that “they have not provided enough response.”

“So we’re continuing to ask Army leadership to: one, make sure it never happens again; two, that all of the units receive a formal apology and receive correct training; and three, that they ensure that whenever religious groups are mentioned in training (in the future) that it gets coordinated with the chaplains’ office and not the equal opportunity (folks),” he said.