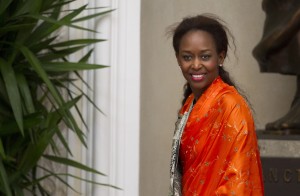 Rwandan genocide survivor Immaculee Ilibagiza has become an American citizen. A best-selling author, Ilibagiza has given talks around the country about the 1994 slaughter in her home country and how her Catholic faith and trust in God helped her survive. She is seen in a 2012 photo at the papal villa in Castel Gandolfo, Italy. (CNS photo/Paul Haring)

WASHINGTON (CNS) — At the end of a process that has taken her 15 years to complete, world-renowned Rwandan genocide survivor and peace advocate Immaculee Ilibagiza became an American citizen the morning of April 17 in New York City.

“I was completely in tears,” she told Catholic News Service in a phone interview April 18. “To be accepted in this country … was like receiving a gift. … I hear my father saying, ‘now you have the right to be here, you don’t have to worry.”

An estimated 800,000 people — including most members of her family — were brutally murdered during the 1994 Rwandan genocide. In the early stages of the conflict, Ilibagiza was sent to hide with a member of another tribe at the behest of her father.

“I am here today … because my father had trust in the man from that tribe,” she told an audience of 50 other immigrants who received their citizenship at the same ceremony.

A Catholic, the then-college student endured 91 days hiding in a bathroom from the “killers” who were looking for her.

In her book “Left to Tell: Discovering God Amidst the Rwandan Holocaust,” she wrote: “They were … right on the other side of the wall. Less than an inch of plaster and wood separated us. Their footsteps shook the house, and I could hear their machetes and spears scraping along the walls. In the chaos, I recognized the voice of a family friend. ‘I have killed 399 cockroaches,’ he boasted. ‘Immaculee will make 400.'”

As she sat down at the citizenship ceremony, the memories of the genocide came drifting back, but it was as if the war had finally ended, Ilibagiza told CNS, noting, “It was like a victory.”

She looks forward to reading more about the history of the United States, especially the struggles to uphold the values on which it was founded.

“It’s not about how America has changed. It’s more (about) the foundation of America,” she said.

“This country has God on their money. ‘What, who does that?'” she asked, expressing amazement at the religious freedom in America.

“When I first came here, everybody seemed foreign. People looked (different), and so I (was) still looking for (the actual) Americans,” she said. “It was beautiful” to see this country embrace every nationality, she said.

After escaping the genocide, Ilibagiza went back to the jail cell of the killer who had shouted out her name while only inches from her hiding spot. As he sat in front of her, she reached out to touch his hands and said, “I forgive you.”

“I believe in love no matter what,” she said. “True love comes from loving others,” she said.

Many people in America do not think suffering is a part of life, she said. “People take a drug or a drink so they do not feel.”

“(But) nobody lives in this world without going through pain,” she added, challenging Americans to find solace by meditating on the suffering of Jesus on the cross.

“Jesus went on the cross to take the maximum of what man can go through in this world to show us, ‘I love you this much,’ and ‘you matter this much,'” Ilibagiza said.

“You accept your pain, look at it in the face, don’t avoid it, but ask for help,” she said.

A popular speaker now, she travels the world telling her story of peace, love, and forgiveness to all she meets.

“Please, in a small way, be a builder of peace,” she said. Her latest book, “The Rosary: the Prayer that Saved My Life,” will hit the bookshelves in August.

NEXT: Catholic Charities leaders plead for needs of poor with Congress