Catholic Charities leaders plead for needs of poor with Congress 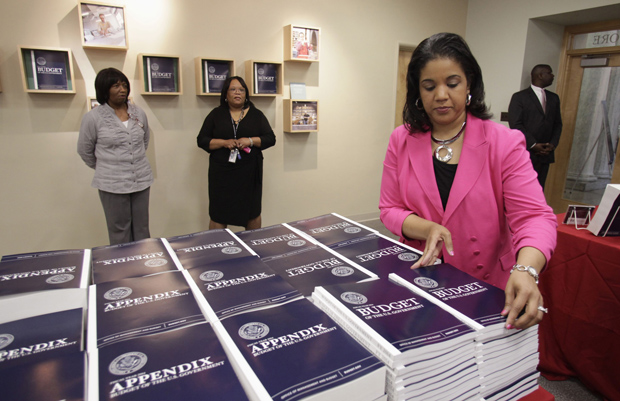 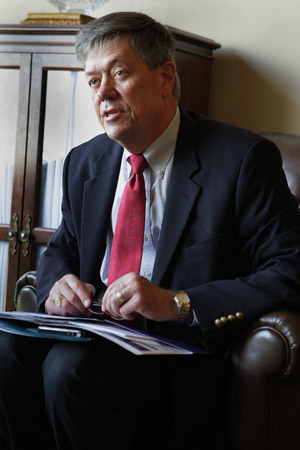 WASHINGTON (CNS) — The picture on Ted Bergh’s cellphone showed a long line of people winding around Springfield Central Catholic School in western Ohio. They were there April 13 to get food, he said; 733 families, 2,378 people in all.

Bergh, CEO of Catholic Charities of Southwest Ohio based in Cincinnati, was astonished by the numbers. The agency worked with the Second Harvest Food Pantry and Catholic parishes in Springfield, northeast of Dayton, to distribute the food in an area continuing to experience high unemployment.

The photo was the cornerstone to a series of meetings Bergh had April 17 with congressional staffers during Catholic Charities USA’s annual Hill Day. Bergh came to Washington to convince members of southwest Ohio’s congressional delegation to preserve funding for important food and nutrition programs.

“Hunger is alive and well in the middle of Ohio.” Bergh told Catholic News Service prior to his first appointment in the office of Sen. Rob Portman, R-Ohio.

At the meeting Bergh talked about the crowd in Springfield as well as the need for immigration reform and sensible gun control. The senator’s assistant, Tyler Brace, listened to Bergh’s stories about agency clients and accepted handouts detailing the work of Catholic Charities across Ohio, much of it through federal grants. Brace remained noncommittal on Portman’s stances.

An hour later, Bergh was at the office of House Speaker John Boehner, R-Ohio. He showed the same picture, told the same stories and reiterated the same concerns to legislative assistant Derrick Walter. This time Bergh invited Boehner to see the work of the food pantry, which is located in the speaker’s district, and meet the people receiving assistance.

Later, Bergh met with Rep. Brad Wenstrup and Rep. Steve Chabot, both Republicans representing large parts of the Cincinnati Archdiocese. He said the meetings went well and that both representatives praised the work of Catholic Charities.

Bergh was one of 30 local Catholic Charities officials from 20 states to participate in Hill Day activities. The event allows local leaders to explain the value of their work by telling the stories of clients and to call upon members of Congress to keep the poor and marginalized a priority when they consider federal budget outlays.

Jeffrey Bialik, executive director of Catholic Charities CYO in the Archdiocese of San Francisco, described the effort to CNS as making “the invisible visible” to members of Congress.

This year’s congressional visits took on a more serious tone given the widening support for social service spending cuts from congressional Democrats and Republicans and the White House.

Several diocesan Catholic Charities directors told CNS some cuts are already being felt thanks to the sequestration, an automatic 5 percent budget cut in social services and military spending that kicked in March 1. Their goal this year was to avoid future funding cuts that would harm the elderly, veterans, single mothers and children.

Steve Bogus, executive director of Catholic Charities of Louisville, Ky., took his time with legislators to explain the challenges poor people face daily in trying to piece together their lives, often running from one social service agency to another.

“It’s really a full-time job to survive when you’re a poor person,” he said. “A lot of people look and say people are just lazy, they’ve been very dependent and they just kind of milk the system. But it’s very hard work to be poor.

“Most people who are on food stamps, for example, are disabled or are single moms trying to do the right thing by their kids. So they have to do something to feed their family for the seven days (of the month),” Bogus added.

He said he wanted to urge Congress to look beyond simply slashing social service spending in a time of sluggish economic recovery.

“If they’re feeling pressured to redo government, then we need to find ways where government can be a catalyst,” he said. “We need to get the whole community involved, including the private and business sectors as well as nonprofits.”

In Montana, the needs and concerns are much the same for Rosemary Miller, who was part of the Hill Day event in earlier years.

“It’s a crucial time for our social service agencies that are serving the poor and need in Montana and every other state,” said Miller, executive director of Catholic Social Services of Montana in the Helena Diocese. “We really need for them (legislators) to be strong in promoting the needs of people.”

Protecting Head Start and other services for children were top concerns for Miller. Such programs, she said, often prevent future social crises such as unemployment, homelessness and hunger.

“I’m sure they’re very cognizant of those needs of the poor,” she told CNS.

Laura Cassell, CEO of Catholic Charities in the Diocese of Rockville Center, N.Y., brought concerns about proposals to cut housing support for families and military veterans. The agency continues to offer whatever assistance it can to residents who continue to struggle with the high cost of housing on Long Island, which has worsened in the aftermath of October’s Hurricane Sandy, she said.

“In addition to folks who we were already providing some assistance to, we now have huge numbers of families, many whom have never been in need, who have a very, very long road to recovery,” she said.

The agency has helped 1,800 families and the case management program Catholic Charities established is expected to continue through at least 2014, Cassell said.

“When you hear representatives talk about housing, it’s often affordable home ownership,” she explained.” Our experience is that affordable rental is just as important. That sometimes gets lost in the conversation.”