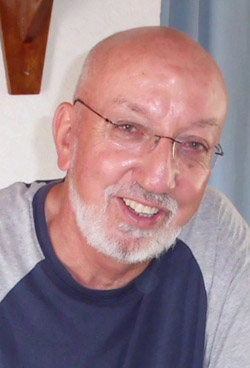 Marianist Brother Richard E. Joyal, who was murdered in Haiti after withdrawing money at an ATM in late April, was a dedicated missionary who had worked in trying circumstances around the world, according to fellow members of the Society of Mary order. (CNS photo/Marianist Brothers Canada)

SANTO DOMINGO, Dominican Republic (CNS) — Marianist Brother Richard E. Joyal, who was murdered in Haiti after withdrawing money at an ATM in late April, was a dedicated missionary who had worked in trying circumstances around the world, according to fellow members of the Society of Mary order.

Brother Joyal, 62, was shot three times in the back in an apparent robbery April 25. He had just withdrawn $1,000 from a bank in the Haitian capital, Port-au-Prince, when two men approached him on a motorcycle, stole his backpack and shot him.

Police said they had arrested a suspect in the murder, but they declined to identify him.

Brother Joyal traveled to Haiti to help close the Society of Mary mission there. He was due to return to his native Canada May 3.

Brother Joyal was helping secure visas and passports for 10 young religious Haitian men who were being sent to Marianist properties in other countries as part of the closure of the Port-au-Prince mission.

The Haitian mission was being closed because of a separate murder of a Marianist brother last year. On Aug. 29, a young Haitian brother was killed in a shooting, Father Blais said.

“It was a very bad situation,” Father Blais said from his office outside of Quebec City. “We still don’t know why he was murdered. We had to remove three others — two Canadians and one French — from Haiti after that murder. And the bishop asked us to close.”

Father Blais said he asked Brother Joyal to travel to Haiti to close the mission “because he was used to working in hard situations.”

Brother Joyal left Winnipeg, Manitoba, as a young man in 1983 to open the Marianist ministry in India. He spent 20 years there, building a “care center for street children, developing lay communities and promoting vocations to Marianist life, both lay and religious,” according to a report on the mission published in 2006.

In 2004, he arrived alone in the Philippines, traveling to the Mindanao region, where clashes between Islamist separatist movements and the Philippine government had displaced hundreds of thousands of residents.

By the time he left four years later, Brother Joyal had created a ministry focused on working with impoverished, homeless children and a center “dedicated to the formation of young men interested in Marianist religious life,” according to an article in a Marianist newsletter in 2009.

He first traveled to Haiti after the disastrous 2010 earthquake.

“Where others saw only poverty and despair, he spoke enthusiastically of the deep faith and liturgical celebrations of her people,” wrote Isabella R. Moyer, president of the International Organization of Marianist Lay Communities, in a blog post April 29. “In an Easter message to a friend, (Brother Joyal) wrote: ‘I knew all along that Jesus was Indian. I also discovered that he was also Filipino. Now, I am discovering that he’s Haitian.'”

Brother Joyal’s body was cremated, said Father Blais, who is working with Canadian authorities to have the remains sent back to Canada, where services will be held.