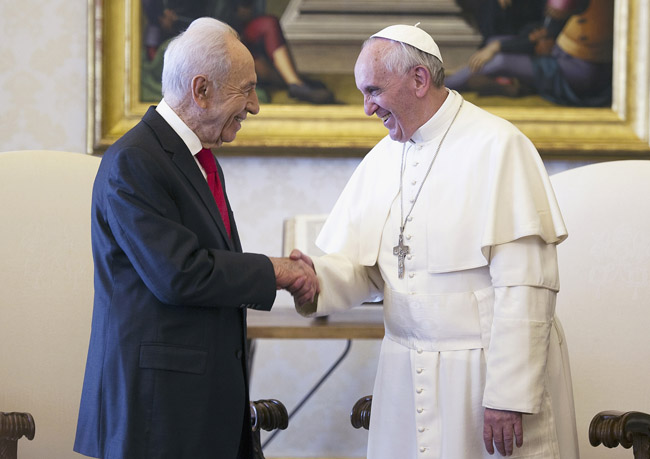 VATICAN CITY (CNS) — Israeli President Shimon Peres officially invited Pope Francis to Israel, telling the pope “the sooner you visit the better, as in these days a new opportunity is being created for peace, and your arrival could contribute significantly to increasing the trust and belief in peace.”

The Israeli president’s remarks were reported in a statement released by the Israeli Embassy to the Vatican after Peres met Pope Francis April 30.

The statement said Peres told Pope Francis about efforts to restart Israeli-Palestinian peace talks, mentioning specifically the meeting April 29 in Washington between U.S. Secretary of State John Kerry and the foreign ministers of the Arab League. Peres also told the pope that Palestinian President Mahmoud Abbas “is a genuine partner for peace,” the statement said.

Peres left the meeting at the Vatican telling the pope, “I am expecting you in Jerusalem and not just me, but all the people of Israel.”

Jesuit Father Federico Lombardi, Vatican spokesman, told reporters, “The pope would be happy to go to the Holy Land,” although there are no concrete plans for the trip.

The Vatican said that during their half-hour private conversation, the pope and the president discussed “the political and social situation in the Middle East, where more than a few conflicts persist.”

Pope Francis and Peres expressed hopes for a resumption of negotiations between Israelis and Palestinians so that “with courageous decisions and availability on both sides, as well as with the support of the international community, an agreement that respects the legitimate aspirations of the two peoples can be reached,” the statement said.

A resolution of the Israeli-Palestinian conflict would contribute to peace and stability throughout the region, the Vatican said.

The two leaders also spoke about “the conflict that plagues Syria” and the need for a political solution in Syria that favors reconciliation and dialogue.

The statement released later by the Israeli Embassy to the Holy See quoted Peres as congratulating the pope on his election and praising Pope Francis’ leadership, which is “characterized by humility, the pursuit of peace and not by force. Your leadership creates a new spirit of hope for peace, of dialogue between nationals and of the promotion of a solution to global poverty and illiteracy.”

The Israeli president, according to the statement, told Pope Francis, “the Middle East is disintegrating” and a severe lack of employment, food and water are making many people vulnerable to those who advocate violence.

“You have an important role in progressing peace and the belief in it,” the statement quoted Peres as telling the pope. The president asked the pope to continue publicly praying for and appealing for peace in the Middle East.

Peres met the pope in the library of the Vatican’s Apostolic Palace; with the assistance of an interpreter the two spoke privately for about half an hour before the Israeli president introduced members of his entourage to the pope and the two leaders exchanged gifts.

Pope Francis gave the president three Vatican medals and Peres gave the pope a leather-bound copy of the Scriptures in Hebrew and English. The president had written a dedication: “To His Holiness Pope Francis, so that ‘you may prosper in all you do and wherever you go’ (1 Kings 2:3). With deep esteem, Shimon Peres, president of the State of Israel.”

Peres, who was scheduled to receive the “Medal of Honor for Peace” from Franciscan friars May 1, told the pope, “I shall go to Assisi and I will pray for you.”

At the beginning of their private discussions, photographers crowded around, snapping pictures of the pope and Peres seated at the desk in the library. The pope shrugged his shoulders and Peres told him, “It’s part of our life now.”

Leaving Israel April 29, Peres said, “I intend to personally invite Pope Francis for an official state visit in Israel and to strengthen the good relations that already exist between Israel and the Vatican. The Vatican has an important role to play in the stability of the Middle East, and I am sure that this visit will contribute both to the State of Israel and to the cause of peace.”

Talk about a possible papal trip to Israel already circulated in March after Pope Francis met Ecumenical Patriarch Bartholomew of Constantinople. Several news reports said the Orthodox patriarch suggested that he and the pope meet in Jerusalem in 2014 to mark the 50th anniversary of the historic first step in Catholic-Orthodox rapprochement: the 1964 meeting there between Pope Paul VI and Ecumenical Patriarch Athenagoras.

NEXT: Canadian brother murdered in Haiti, mission in country closed