Tens of thousands march for life in Rome 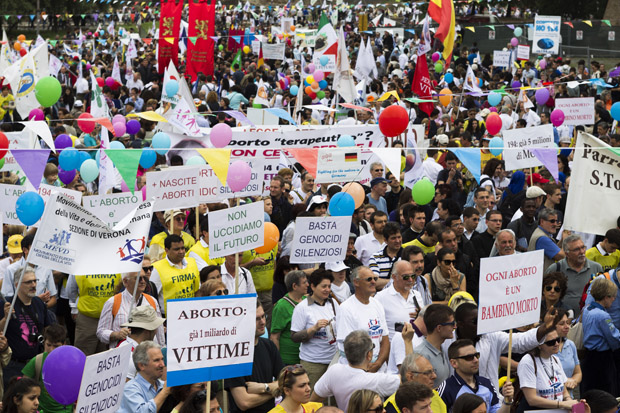 According to organizers, some 30,000 marched along the route from the Colosseum to Castel Sant’Angelo, a distance of nearly two miles. They followed a large wooden cross decorated with replicas of unborn children, and carried signs bearing messages such as “Let’s not kill the future” and “Stop silent genocide.” The estimated turnout was double that of last year.

“It’s a very joyful event, even though obviously the realities of which we’re speaking are in themselves profoundly sad and tragic,” Cardinal Burke said.

(See a video interview with Cardinal Burke at the march, below.)

Rome Mayor Gianni Alemanno and Maurizio Gasparri, vice president of Italy’s Senate, were among the participants, along with a number of international delegations.

“This is becoming really, I think, a march for all of Europe,” the cardinal said, noting Rome’s status as a “spiritual center for the whole world.”

Many of the marchers had reached the end of the route by 11:30 a.m., when Pope Francis acknowledged them before praying the “Regina Coeli” in St. Peter’s Square, at the other end of Via della Conciliazione from Castel Sant’Angelo. The pope called on the marchers to “keep the attention of everyone on the important issue of respect for human life from the moment of conception.”

The pope also praised a petition drive in support of the pan-European “One of Us” initiative, which he said would “ensure legal protection to the embryo, protecting every human being from the first moment of existence”; and he noted the pro-life “Evangelium Vitae” pilgrimage, to take place at the Vatican June 15 and 16.

After leaving the square, Pope Francis rode in the popemobile down Via della Conciliazione, where he was met by many participants in the march.

Cardinal Burke, a former archbishop of St. Louis who now serves as prefect of the Supreme Court of the Apostolic Signature, acknowledged that Europe’s pro-life movement is still much smaller than that in the United States, but said he drew hope from recent demonstrations in France protesting the legalization of same-sex marriage there, which he said show a growing willingness to resist secularization.

The cardinal said he also took heart from the large proportion of young people among the participants in the March for Life, reflecting a heighted sensitivity to the horror of abortion among those born after its legalization.

“Now today’s young people grow up in a world where they know that their life was in a certain way under threat from the moment they were conceived,” the cardinal said.

The day before the march, organizers held a day-long conference at Rome’s Regina Apostolorum University, featuring talks on bioethics by medical scientists and presentations by Cardinal Carlo Caffarra of Bologna, Italy, and Archbishop Giampaolo Crepaldi of Trieste, Italy.

NEXT: Sainthood cause of 16th-century Jesuit moves to Vatican