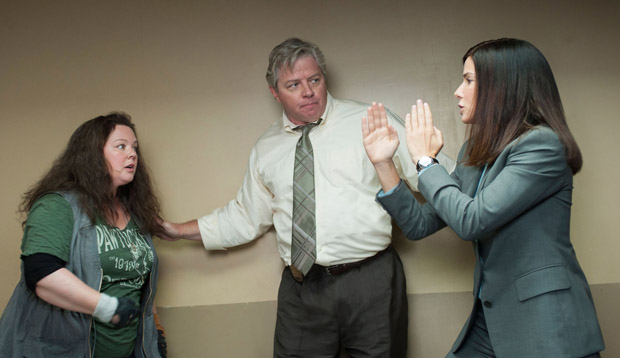 Melissa McCarthy, Tom Wilson and Sandra Bullock star in a scene from the movie "The Heat." (CNS photo/Fox)

In large part, that’s because of the character of Shannon Mullins (Melissa McCarthy), a scruffy, rule-averse Boston police officer who’s none too pleased when she’s forced to team, temporarily, with uptight FBI agent Sarah Ashburn (Sandra Bullock). As this odd couple work to bring down a drug lord, though, their squabbling is predictably transformed into friendship.

Feig gains some traction from McCarthy’s wild riffs at the expense of stiff straight-man Bullock. But gears grind as gritty vocabulary works its way into virtually every sentence of dialogue.

Additionally, Mullins’ inability to form emotional bonds with any of the numerous men in her life, while shown to be dysfunctional, nevertheless leads to a comic (albeit indirect) treatment of casual sex.

A recurring joke concerns the bad religious art favored by Mullins’ South Boston Irish clan of perpetually quarrelling relatives. But, far from being irreverent, this segment of the humor satirizes the cheapening of faith. Thus we see Jesus, against a background of black velvet, taking part in various sporting events as a co-opted member of one cherished Beantown team after another.

While that aspect of life in Southie may pass comic muster, Mullins’ fondness for low street talk — a taste her unruly family members are portrayed as sharing all-too-fully — leaves no F-bomb within reach unexploded. Among the resulting casualties is the occasionally touching — if formulaic — bond that eventually unites the two previously lonely main characters.

PREVIOUS: Mother Dolores Hart reflects on life of screen gems with Elvis, to reforming a monastery

NEXT: Hi yo, moviegoer, and ride away from this ‘Lone Ranger’