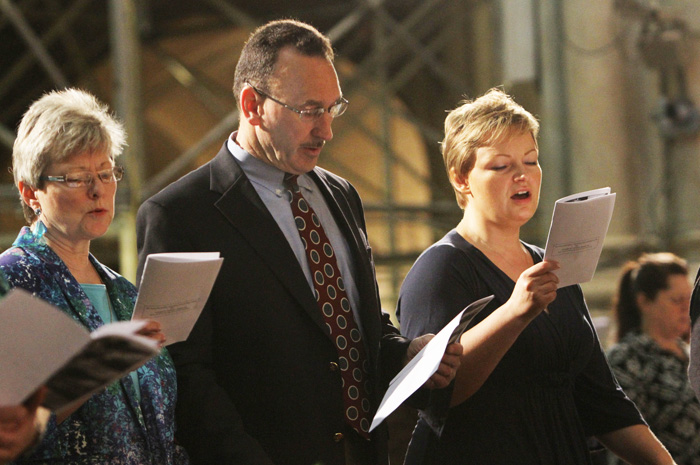 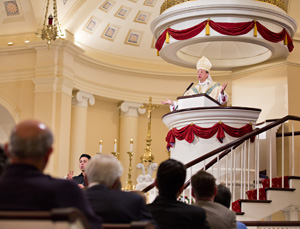 Archbishop William E. Lori of Baltimore delivers the homily during the opening Mass for the second annual Fortnight for Freedom observance June 21 at the Basilica of the National Shrine of the Assumption of the Blessed Virgin Mary in Baltimore. (CNS photo/Tom McCarthy Jr., Catholic Review)

BALTIMORE (CNS) — Archbishop William E. Lori of Baltimore held up statesman Sargent Shriver and other Catholics like him as “a living example of how faith enriches public life” June 21 at a standing-room-only Mass opening the second Fortnight for Freedom.

“Faith serves the public life not only by the sheer magnitude of its humanitarian services,” he said, “but by its witness to Christ Jesus, to its witness to those moral truths and values without which democracy cannot flourish.”

Celebrated at the Basilica of the National Shrine of the Assumption of the Blessed Virgin Mary in Baltimore, the evening Mass began 14 days of prayer, education and action on religious liberty issues called for by the U.S. bishops.

As chairman of the U.S. bishops’ Ad Hoc Committee for Religious Liberty, Archbishop Lori has been at the forefront of national efforts aiming to protect religious liberty from government infringement.

Chief among perceived threats to religious liberty is the U.S. Department of Health and Human Services’ mandate that most employers, including Catholic hospitals, schools and charities, provide insurance coverage for artificial contraception, sterilization and abortion-inducing drugs, which the church morally opposes.

The mandate is part of the 2010 Patient Protection and Affordable Care Act. New proposed rules for the mandate are to take effect for religious organizations Aug. 1; it is to be implemented with their first insurance premium renewals. It went into effect Aug. 1, 2012, for nonreligious organizations, and several businesses are currently fighting it in the courts.

In addition to the HHS mandate, Archbishop Lori also condemned efforts to marginalize the church’s definition of marriage through anti-discrimination laws, and to criminalize church-provided services to people who are living in the country illegally.

Archbishop Lori and others have argued that all Catholic organizations should be exempt from the mandate.

“The church does not have two wings: a ‘faith and worship’ division on one hand, and a ‘service’ division on the other,” he said in his June 21 homily. “What we believe and how we worship give rise to a life of service.”

“If left unchecked, this tendency will continue to diminish the influence of religion in helping to shape the character of our country, not only by our words and worship, but by the way we conduct our ministries of service,” he added. “Faith and worship inspire and sustain the service the church offers, yet the government is insinuating a contrary gospel in the church’s daily life.” 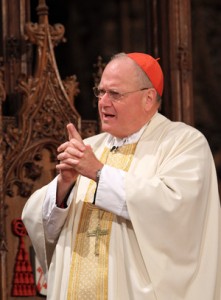 In addition to the HHS mandate, Archbishop Lori also condemned efforts to marginalize the church’s definition of marriage through anti-discrimination laws, and to criminalize church-provided services to people who are living in the country illegally.

In a May 31 letter sent to Catholics in the Archdiocese of Baltimore, Archbishop Lori pointed to local campaigns to curtail freedom of speech and religion, including a Johns Hopkins University pro-life student organization that was initially denied club status, a Baltimore City ordinance compelling signage about abortion to be posted at pro-life crisis pregnancy centers, and a lawsuit seeking to end prayer at Carroll County Board of Commissioners meetings.

The bishops first held a Fortnight for Freedom last year. The observance opened on the eve of the feast of St. Thomas More and St. John Fisher, 16th-century English martyrs. It ends July 4, Independence Day.

“We continue to live in an age of martyrs … when believers are tortured and killed because they are believers in places like Iran, Iraq, China and Nigeria,” Archbishop Lori said in his June 21 homily. “Let us keep the flame of faith and the flame of freedom burning brightly not only for our children and for our children’s children, but also for the sake of these persecuted believers who see in our form of government and in our great land a beacon of hope.”

Maria Trejo, 33, a parishioner of St. Joseph in Cockeysville, said she shares Archbishop Lori’s concern about the HHS mandate and changing definition of marriage.

“We wanted to get more involved and see what we can do to help,” she told The Catholic Review, Baltimore’s archdiocesan newspaper. “We know that prayer has power, and we should never give up. We should fight for what we believe in, despite the politics against us.”

Robert Miller, 47, attended the fortnight Mass with his wife and two children. A parishioner of Holy Apostles in Gambrills, Miller said he feels “very strongly” about the need to protect religious freedom, and thinks Catholic business owners should also be exempt from the HHS mandate.

“Prayer is something that is very powerful, and the more you pray, the more you expect,” he said. “What you hope is that other people will come to pray, and it will become a huge movement. That way it will hopefully move the politicians and get us the traction that we need.”

On June 22 in Washington, the Knights of Columbus sponsored a 7 p.m. Mass at St. Joseph’s Church on Capitol Hill, followed by a candlelight vigil on the U.S. Capitol grounds.

The national event will culminate with a July 4 noon Mass at the Basilica of the National Shrine of the Immaculate Conception in Washington.

NEXT: Roe raised more questions about abortion than it resolved, says speaker