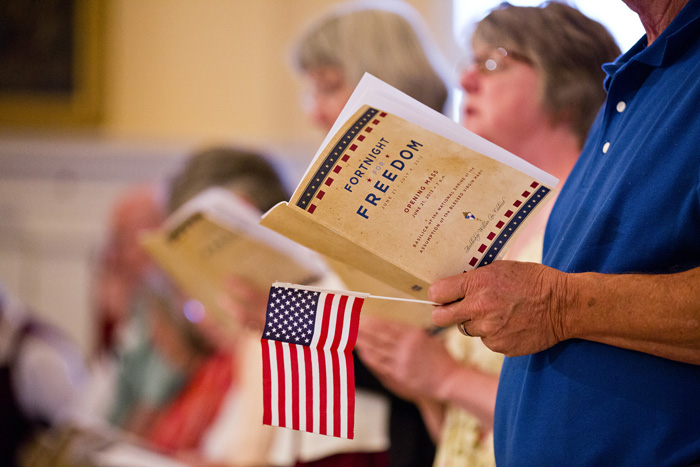 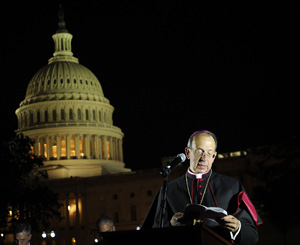 WASHINGTON (CNS) — A religious liberty prayer vigil held the evening of June 22 on the east lawn of the U.S. Capitol drew about 100 supporters including Mary Ellen Barringer, a volunteer with the D.C. Knights of Columbus State Council and a member of St. Bernadette Parish in Silver Spring, Md.

The vigil, which was preceded by a Mass celebrated at St. Joseph’s Church on Capitol Hill, was sponsored by the Knights of Columbus as part of the Fortnight for Freedom initiative.

Sponsored for the second year in a row by the U.S. Conference of Catholic Bishops, the two-week period consists of action and prayer to address current challenges to religious liberty, and chief among those challenges the Catholic Church feels is the federal contraceptive mandate.

The candlelight vigil marked the feast of the martyrs St. John Fisher and St. Thomas More, both of whom were executed for defending religious freedom.

Maureen Ferguson, senior policy adviser to the Catholic Association, said the fortnight was not just about Catholics praying for religious freedom and the preservation of religious liberty.

(See a video of the vigil below.)

“This is very much an ecumenical moment where all people of faith are coming to realize that our freedom of religion is being infringed upon and that the government is overreaching,” Ferguson said. “This is a country that was founded on robust principles of religious liberty, so this is an issue for all people of faith.”

Mass at St. Joseph’s Church was followed by a procession to the Capitol grounds for the vigil, where Baltimore Archbishop William E. Lori spoke to the importance of prayer for effective government.

“This evening we meet Christ and confess his name here at St. Joseph’s Church on Capitol Hill so near to the seat of our government,” the archbishop said. “We do this in the clear recognition that threats to religious liberty are mounting.”

“There are policies that seek to limit religious freedom only to freedom to worship. In effect, our government is beginning to say to us, ‘Well, you could worship however you’d wish and whenever you wish,'” he said, “but when you serve the needs of the poor and you educate the young then you must play not by your rules, the rules of faith, but by our rules, the rules of the secular culture.”

The previous evening Archbishop Lori, chairman of the U.S. bishop’s Ad Hoc Committee for Religious Liberty, kicked off the fortnight observance by celebrating Mass at the Basilica of the National Shrine of the Assumption of the Blessed Virgin Mary in Baltimore.

Surrounded by U.S. government buildings, with the Capitol in front of the crowd and the Supreme Court building behind, friars from the Dominican House of Studies in Washington read passages from Scripture and the compline, or night prayer.

“We still are tremendously blessed when it comes to religious freedom when you look at other countries around the world, but it does feel like our religious freedom is being pushed in a number of ways,” Barringer told CNS. “All of the precepts of the church only lead you to greater happiness.”

“Of all of our unalienable rights, the founders of our country chose to put religious liberty first in our Bill of Rights,” Supreme Knight Carl Anderson said in a statement. “We will pray that those God-given rights be respected and protected by our government.”

The Catholic Association’s Ferguson said the Fortnight for Freedom was of great importance.

“We need action, we need people to speak out and contact their members of Congress to let them know that you’re concerned about this issue,” she said after the vigil. “Tonight, of course, we are praying, and that is the most important thing we can do.” 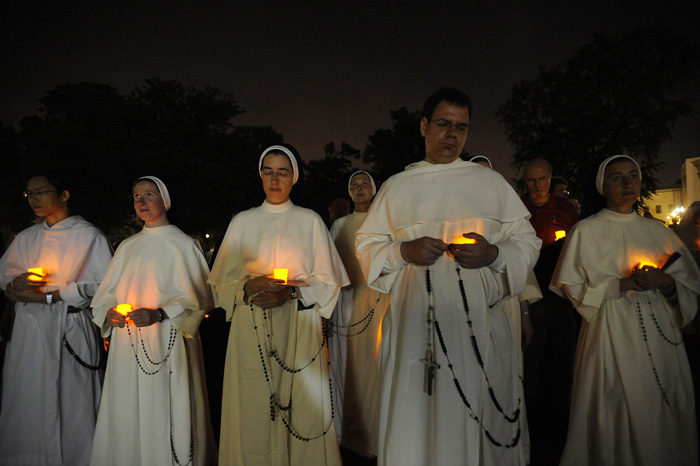 Several Dominican Sisters of St. Cecilia and Dominican friars from the Dominican House of Studies pray the rosary during a candlelight vigil for the second annual Fortnight for Freedom observance outside the U.S. Capitol in Washington June 22. (CNS photo/Leslie E. Kossoff)