Hope for those ‘living in shadows’ seen in immigration reform debate

AUSTIN, Texas (CNS) — With the debate on immigration underway in the U.S. Senate, the nation may finally be making some headway on long-overdue comprehensive reform of its immigration policies, said Austin Bishop Joe S. Vasquez.

“Our country has needed this legislation for years,” he said. “With the help of all in the Catholic community, we finally have an opportunity to see some progress for our sisters and brothers who have lived in the shadows far too long.” 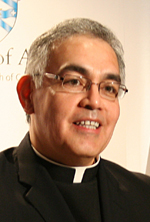 He made the comments in a June 8 letter of greeting to participants in the “Nuns on the Bus” campaign who arrived in the Texas capital. They are on a cross-country tour to push for reform.

Bishop Vasquez was unable to greet the bus in person when it arrived the evening of June 8, but in his letter he told Sister Simone Campbell, head of the Catholic social justice lobby called Network, that he joined her and the other women religious “in praying for the success of our common efforts to pass immigration reform, and know that I am praying for you and for this tour.”

While in Texas, the bus made stops at a parish in San Antonio, a clinic and an education center in Laredo, and a shelter serving homeless immigrants in El Paso, then it headed to Las Cruces, N.M., June 11. The group ended the day in Tucson and June 12 planned to be in Nogales, Ariz., then Phoenix. The last leg of the journey was to include several stops in California, beginning June 13.

“We are so grateful for Bishop Vasquez’s kind statement,” said Sister Campbell, a Sister of Social Service. “As members of the church, we are all called to share this journey together and follow the Gospel mandate to welcome the immigrant.”

She added that Network, which is leading the bus trip, stands with the bishops “in calling on Congress to take immediate action to create a roadmap to citizenship and pass comprehensive immigration reform. The time is now.”

Called the “Network Nuns on the Bus: A Drive for Faith, Family and Citizenship,” organizers kicked off the tour May 29 in New Jersey and it was scheduled to end June 18 in San Francisco.

A total of 29 women religious planned to go along for at least part of the trek through 40 cities in 15 states.

The tour was launched early in the morning at Liberty State Park in Jersey City, N.J. It was the maiden leg of the trip with seven sisters on board the vehicle, its “Nuns on the Bus” logo displayed in colorful, wrap-around graphics.

That morning the bus headed quickly to Scranton, Pa., then wheeled around and by that evening was back in New Jersey where some 500 people, including Trenton Bishop David M. O’Connell, came to support their cause at a rally in St. Ann Parish in Lawrenceville.

In his welcoming remarks, Bishop O’Connell noted a statement issued May 21 by New Jersey’s bishops urging support of fair and just immigration reform and praised the sisters’ efforts in reminding one and all of America’s heritage as a nation of immigrants.

“The Catholic Church in our country has always been a church of immigrants, welcoming and ministering to them as Jesus encouraged,” he said.

“I am not political. I am a person of faith who shepherds a local church. Our church is pro-life, pro-family and pro-poor,” Bishop O’Connell said. “I lend my prayer and encouragement to the cause of comprehensive immigration reform in which all three of those causes are united. Now is the time to take action, now is the time to welcome brothers and sisters as strangers no more.”

During their visit, the sisters — as they planned do all along their 6,500-mile road trip — asked everyone to sign postcards and contact their senators, showing their support for common sense immigration reform which would set up workable pathways to citizenship and help enable families to stay together and work and live here without fear.

Describing herself as the granddaughter of Czech and Irish grandparents, Sister Marti McCarthy, who is a Sister of Social Service, told the crowd: “I am here because they believed in the American promise that if you worked hard, you could make a decent living.”

Contributing to this report was Lois Rogers, features editor of The Monitor, newspaper of the Diocese of Trenton, N.J.

NEXT: Obama administration drops fight to limit age restrictions on Plan B