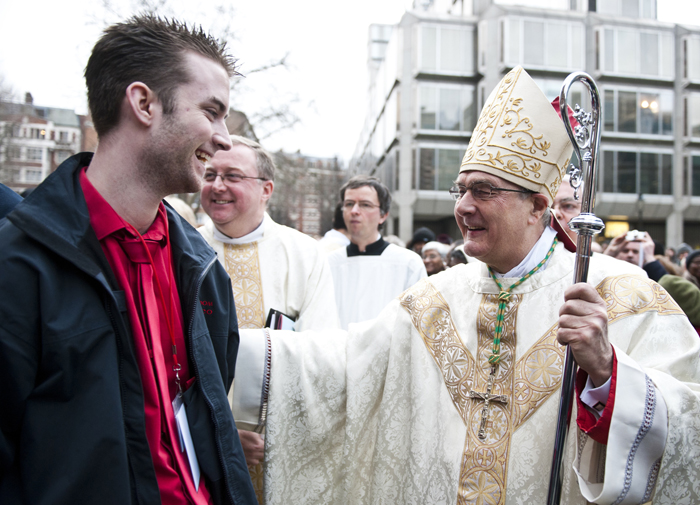 Pope Francis has appointed Auxiliary Bishop Alan Hopes of Westminster as the the fourth bishop of East Anglia in England. Bishop Hopes is the highest-ranking former Anglican to be a member of the Catholic hierarchy in England and Wales. He is pictured during a liturgy in January. (CNS photo/Marcin Mazur, Bishops' Conference of England and Wales)

MANCHESTER, England (CNS) — Pope Francis has appointed the most senior former Anglican in the hierarchy of the Catholic bishops of England and Wales to head the Diocese of East Anglia.

Auxiliary Bishop Alan Hopes of Westminster will become the fourth bishop of the diocese, located in the eastern United Kingdom and encompassing the towns of Norfolk Suffolk, Cambridgeshire and Peterborough.

Bishop Hopes, 69, served as an Anglican minister for 24 years until he became a Catholic in 1994 following the decision of the General Synod of the Church of England to allow women to be ordained as priests.

After the appointment June 11, Bishop Hopes said in a statement that he would take up his new office with “a profound sense of trust in God’s loving care for us.”

“In this Year of Faith, and at the beginning of the pontificate of Pope Francis, it is an immense privilege to be called to follow in the footsteps of the late Bishop Michael Evans in serving and leading God’s holy people in this diocese,” he said.

“I look forward to working closely with our many ecumenical partners in seeking to respond to the call of our Lord Jesus Christ to love God and serve our neighbors,” Bishop Hopes added. “I also hope to engage with the members of the other faith communities and all people of good will.”

Bishop Hopes was ordained as a Catholic priest in December 1995. He served as vicar general of the Archdiocese of Westminster before his episcopal ordination in Westminster Cathedral in London Jan. 24, 2003.

He was instrumental in establishing the Ordinariate of Our Lady of Walsingham in Britain for former Anglicans in 2011. It was the first personal ordinariate to be set up anywhere in the world.

At present, he is chairman of the Committee for Liturgy of the Bishops’ Conference of England and Wales and is a member of the bishop’s conference Department of Life and Worship.

He will be installed July 16 at St John the Baptist Cathedral in Norwich.