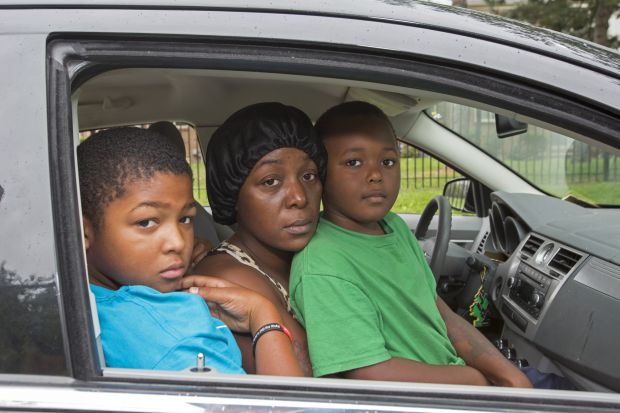 Katrina Robinson and her two sons, David Collins, 11, and Dabion Collins, 7, pose for a photo in their family car in Detroit Aug. 7. (CNS photo/Jim West)

WASHINGTON (CNS) — After three months, Katrina Robinson and her two young sons are getting tired of roaming Detroit’s suburbs to find a safe place to sleep.

Since May, on the nights when they can’t crash with family or friends, the family car is the only shelter Robinson and her two young sons have. The 24-hour big box stores, with bright lighting, security cameras and a decent amount of foot traffic that deters robbers from lurking offer the safest place to bed down for the night.

“If you want to sleep in your car, a Walmart, Meijer or a store that’s 24 hours in suburban areas (is best). With public bathrooms. That’s the safest I feel with my kids,” Robinson said.

Shelters are not an option.

“We sleep and we get up early in the morning and start our day,” Robinson told Catholic News Service by phone from the St. Dominic Outreach Center, near Wayne State University, where she gets food and her sons, ages 7 and 11, can join the activities for kids.

At some point throughout each day, Robinson will visit her three older children, a 17-year-old daughter and two 19-year-old sons. They have stayed much of the time with their father since she decided to give up her rented home after being laid off from a job as a hotel clerk. She said she moved to avoid having an eviction on her credit record.

Robinson’s father has a home on the city’s east side, but she rarely stays there because he works until late at night. Even with an alarm system and heavy bars on the doors, Robinson does not feel it’s a safe place for her boys.

“You don’t want them living in a block with drug dealers shooting it out every night,” she said.

Despite having no place to call home, Robinson said she has found little housing help from social service agencies. If she had been evicted, the help would have been easier to come by, the agencies tell her, she explained.

Robinson receives a $700 a month unemployment benefit, but $200 is committed to paying for storage for furniture and other possessions. That leaves too little for a place large enough for six people in the city’s safer neighborhoods like the one near Wayne State where the family formerly lived. So she has turned to the St. Dominic Outreach and its two-person staff and several volunteers for assistance.

Director Sherron Jenkins said more and more people like Robinson are showing up at her door. Jenkins, who has worked at St. Dominic for nearly 18 years, said the number of people visiting the center has jumped by more than 50 percent since 2011 as more people are laid off from jobs. At times, Jenkins has to scramble to find donations of cash and food.

For Robinson and her older children, finding work is difficult because there are too many people pounding the pavement and not enough jobs. Most of the positions she has heard about pay being not much more than the $7.40 hourly minimum wage in Michigan, a couple of dollars less than her hotel job.

As challenging as life is, Robinson said that Detroit’s bankruptcy is bound to make things worse for people. She worries that work will be even harder to find as employers cut back on staff or stop hiring.

In the meantime, Robinson’s top priority is finding a home before school starts to stabilize her family’s situation. She does not want her boys missing school. Once settled, she plans to spend more time on finding work.

Eventually, Robinson wants to save enough money to buy an inexpensive house in the neighborhood she calls home. For now, the car will have to do.

“I’ve never been like this. I’m only 35. I never thought it would be like this for real. I never understood the homeless part. Once you are (homeless), it’s hard to get out of.”

NEXT: Detroit’s bankruptcy seen as chance for city to become livable again