Priests find physical health to be as important as spirituality 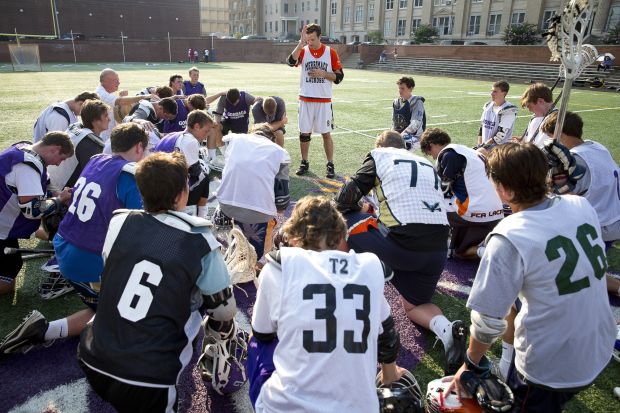 WASHINGTON (CNS) — On a recent hot summer evening, a group of lacrosse players gathered around a fellow athlete on the Gonzaga College High School field before the start of their game.

The 35-year-old man with perspiration beading on his forehead was more than just another player leading them in a prayer. He was a priest.

When Father Mark Ivany finished the blessing and lifted his right hand in the air in the sign of the cross, he shouted out to the other players to give it their all. They ran to their assigned positions on the field to await the coach’s whistle, signaling the game’s beginning.

Father Ivany isn’t officially the team’s chaplain. In fact, this is not an official team, but a group of students, alumni and friends who gather throughout the summer for recreational sports.

“I’m not really a gym kind of guy, but it’s important to me to stay in shape, so this is one of the ways I get exercise,” said the pastor of Church of the Assumption of the Blessed Virgin Mary in Washington.

The other players didn’t cut Father Ivany any slack during the game, but the dark-haired priest with the toned physique and megawatt smile was swift as any of the young athletes, and just as aggressive as he threw the ball to score one for his team.

This kind of activity is more than just recreation for the priest, who was an All-American lacrosse player at Massachusetts’ Merrimack College in 2000.

“Physical fitness and the priesthood have a lot in common,” Father Ivany told Catholic News Service. “The healthier I am, the longer I can be a priest in service here on this earth.

“I love being a priest, so I’d like to do it as actively and as engaged as possible. So, staying healthy and eating well and staying in good shape I think is going to add to my service as a priest.”

The rising rate of obesity among all Americans is not lost on church leaders or the priests themselves.

Msgr. Rick Hilgartner, executive director of the Secretariat of Divine Worship for the U.S. Conference of Catholic Bishops, noted that modern technology and transportation advances have helped create a more sedentary life for humans in the past century, and that includes priests.

A testament to a different lifestyle of a bygone era can be found in stories about Cardinal James Gibbons — Baltimore’s archbishop from 1877 until his death in 1921. When he was a young priest, he would use a rowboat to cross the Baltimore Harbor to say Mass for the prisoners at Fort McHenry, Msgr. Hilgartner said.

“That would have been pretty exhausting simply to get in the boat all by himself and row all of the way across the harbor to get to celebrate Mass,” he said. “Certainly in a time before cars, priests even making visits to homes or going to visit the sick, would have been on foot, or perhaps on horseback.”

Other duties for a parish priest 150 years ago would have been chopping wood, light farming, carpentry and other activities that would have required physical excursion.

It’s one of the reasons why this 45-year-old priest makes time in his schedule to work out in the gym and to run. In fact, running has become a passion for him, and he has participated in marathons in recent years.

“If I take seriously being a good steward of the gift God has given me — the gift of myself, my body, who I am as an instrument for the Lord — then I need to take care of that,” Msgr. Hilgartner said. 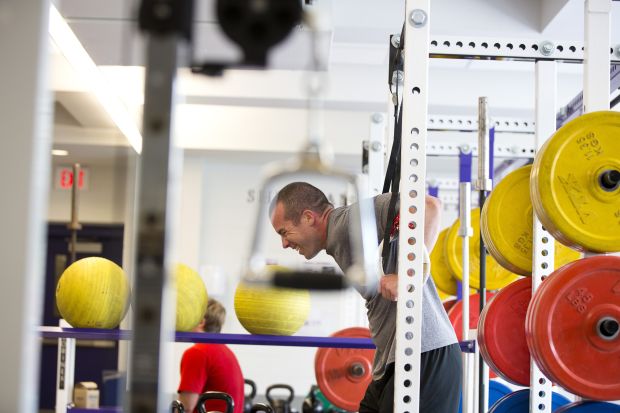 While Richard Nichols, a Jesuit scholastic studying to be a priest, attended Immaculate Conception Seminary in South Orange, N.J., he began the popular CrossFit training. It’s an intense fitness regimen that includes weight training and varied functional movements performed at a high-intensity rate.

Nichols is in prime physical condition, with the physique of a bodybuilder, and he’s helped form a CrossFit club at Gonzaga College High School in Washington, where he teaches math.

He views his body as a gift from God and says his physical potential should be developed as intensely as his intellect or spirituality, to show reverence for that gift.

It’s a philosophy that Father Eugene Hemrick has been touting to his fellow priests for decades, through his popular column and books, and in his role as director of the National Institute for the Renewal of the Priesthood.

The 75-year-old priest is an avid golfer and has been a competitive runner throughout the years, and believes more priests should pay closer attention to their physical health.

Too often priests get so caught up in their ministries, they neglect their physical well-being, Father Hemrick told CNS as he was playing a few rounds of golf.

“In ministry, when you are dealing with a lot of people day in and day out, and you are trying to respond to them and stay alert, there is nothing like being in good shape to be alert, be able to concentrate and focus,” he said.

As Father Rob Walsh prepared for Mass at the Catholic Student Center at the University of Maryland in College Park, he said in an interview that his exercise regimen helps him keep balance in his life, and in turn, that makes him a better priest in his role as chaplain at the school.

Maintaining a balance of ministry, continuing study, socializing and physical exercise is a concept that was stressed to him in seminary, and he’s steadfast that his ministry will suffer if he doesn’t continue that equilibrium.

It also will help him stay in better shape as he ages, and will allow him to continue his work for the church for many more years than if he didn’t exercise regularly, Father Walsh said.

“We need to not be thinking, ‘I can retire whenever I feel like it if my health isn’t good enough,'” he said. “That’s not an attitude I want. I want an attitude of ‘I want to serve God as best as I can, for as long as I can.’ He’s given me certain gifts to do that, and I need to take care of those gifts.”

For Father Ivany, maintaining a healthy lifestyle provides him with the right attitude to serve God properly.

“When I work out. When I eat right, I feel better,” he said. “When I feel better, I’m happier, and I think the world needs more happy priests.”

NEXT: Poverty, ‘ignorance’ blamed in destruction of Egypt Christian churches