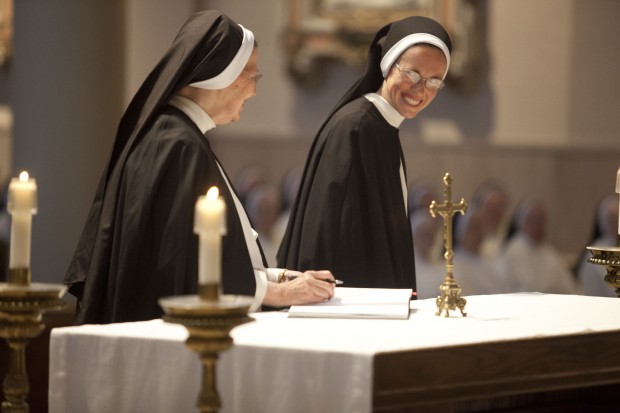 Dominican Sister Mary Gianna Klein smiles at Mother Ann Marie Karlovic shortly after after she signed her perpetual vows on the altar at the Cathedral of the Incarnation in Nashville, Tenn., July 22. (CNS photo/Rick Musacchio, Tennessee Register)

NASHVILLE, Tenn. (CNS) — The Dominican Sisters of St. Cecilia Congregation celebrated a series of transitions in their Nashville-based community as several women made their final profession of vows or their first profession of vows, and still others entered the novitiate.

The transitions will be capped with the arrival Aug. 15 of 28 young women who will enter the community as postulants.

The Nashville Dominicans, in their traditional white habit, form one of the youngest and fastest growing communities of religious sisters in the country; the community has experienced steady growth since the 1980s. The congregation was founded in 1860 and is dedicated to the apostolate of education.

On July 22, 11 sisters made their profession of perpetual vows at a Mass celebrated at the Cathedral of the Incarnation in Nashville. Bishop David R. Choby of Nashville celebrated the Mass, and retired Bishop Bernard J. Harrington of Winona, Minn., concelebrated.

Dominican Father Gabriel Gillen, a member of his order’s Province of St. Joseph, was homilist for the Mass, and Deacon Waldo Martinez Jr., the father of one of the newly professed, was deacon of the word.

The 11 sisters who made their final profession of vows came from eight dioceses in the United States, one in Poland and one in Canada.

In his homily, Father Gillen spoke of the “radical act of abandonment,” which the 11 young women were called to make as each of them professed the vows of poverty, chastity and obedience “for all my life.” He noted that this is “a special calling they are given from the Lord himself.” 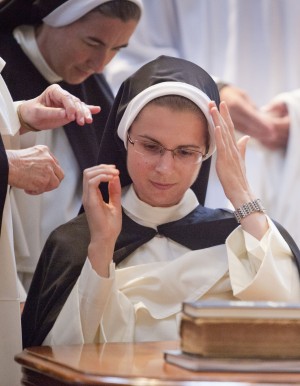 Dominican Sister Elena Marie Piteo is assisted by Director of Novices, Sister Anna Grace Neenan, after being clothed in the black veil, which is the sign of her religious profession at the Cathedral of the Incarnation in Nashville, Tenn. (CNS photo/Rick Musacchio, Tennessee Register

Like Mary’s response to her call at the Annunciation, he said, the sisters’ profession of vows is, for each of them, an “act of immersion in the will of God,” an act which unites them to Christ in self-giving love.

Father Gillen said Mary shows the sisters what their role is as brides of Christ, and that by their profession, they are to be images of the Catholic Church, which is the bride of Christ.

On July 25, 12 novices made their first profession of vows at the cathedral. The sisters came from eight U.S. dioceses as well as two dioceses in Australia and Ireland.

Principal celebrant of the Mass was Bishop Choby, with Bishops R. Daniel Conlon of Joliet, Ill., and William F. Medley of Owensboro, Ky., were concelebrants. Dominican Father Albert Trudel, also from the Province of St. Joseph, gave the homily.

Shortly before entering a retreat to prepare for their profession of vows, the sisters made a Year of Faith pilgrimage to Rome for a meeting Pope Francis had with seminarians, novices and those discerning a religious vocation.

On July 27, 11 sisters renewed their vows at the community’s Mass in the motherhouse chapel. The same afternoon 16 postulants received the Dominican habit from Mother Ann Marie, prioress general, in the presence of the community. At the ceremony the postulants received their religious names and began their year of canonical novitiate, a year devoted to study and preparation for religious profession.

PREVIOUS: Basilica decree for church a ‘proud moment’ for Diocese of Raleigh