Many of Egypt’s Christians think U.S. has aligned with the wrong side 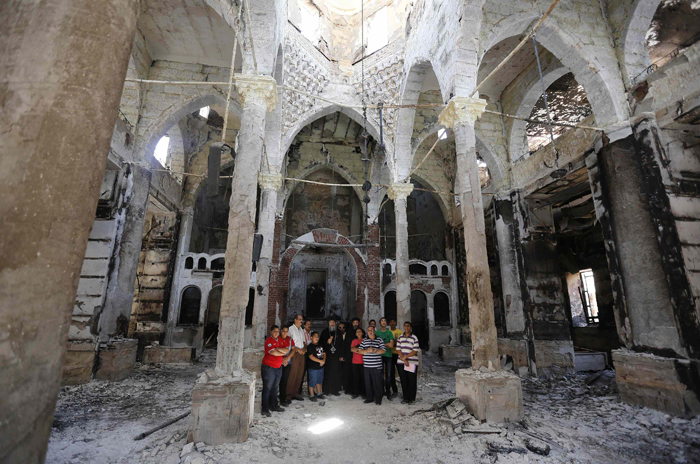 A Coptic Orthodox bishop prays with local residents at burnt and damaged evangelical church in Minya, Egypt, Aug. 26. Egypt's military and interim government have condemned all the attacks on Christian properties, calling them the "work of terrorists," and blaming them on the Muslim Brotherhood and other groups supportive of ousted leader Mohammed Morsi. (CNS photo/Louafi Larbi, Reuters) 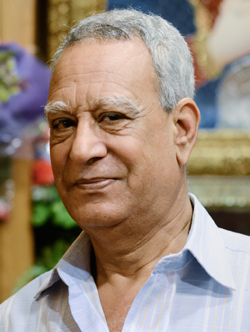 Retired engineer Samir Ebrahim is pictured at the Coptic Orthodox Church of the Virgin Mary in the Maadi suburb of Cairo Aug. 25. Christians make up between 10 and 15 percent of Egypt’s 82.5 million people, who are predominantly Sunni Muslim. (CNS photo/Dana Smillie)

CAIRO (CNS) –Two weeks after the churches he used to pray in were ransacked and burned to the ground in the Egyptian port city of Suez, Istafanos Youssif sat “searching for God” in a Cairo convent.

He said he hoped to get over the pain, through “reflection and prayer,” and that he understood who was behind the church burnings.

What he said he could not understand was the U.S. position toward his country, Egypt.

The Muslim Brotherhood “only has one goal, either to rule the country, or burn it. We love the American people, but not what (U.S. President Barack) Obama is doing. He is supporting the Brotherhood, the terrorists,” said Youssif, a second-year university student and member of Egypt’s Coptic Catholic community.

Since the military’s overthrow of Islamist President Mohammed Morsi in early July, many Christians in Cairo told Catholic News Service the United States is taking the wrong side, with some, like 21-year-old Youssif, even accusing Washington of openly supporting terrorism.

Their concerns echo, almost to the word, Egypt’s military and its new interim government’s claims that Morsi was deposed by popular demand, that now-dismantled pro-Morsi camps in Cairo were armed, and that the Muslim Brotherhood and other groups with which Morsi was aligned are the ones behind a wave of attacks on state, security and Christian institutions around the country.

“The U.S. is calling for human rights, but where are our human rights?” Youssif asked, complaining about what he perceived was “a lack of U.S. support” for Egypt’s military, which, he said, had “responded to the will of the people” by ousting Morsi.

Obama has not termed the takeover a coup, though some U.S. lawmakers have. But Obama has condemned the forced dismantling of two pro-Morsi camps in Cairo Aug. 14, saying Washington supports “the right to peaceful protest.”

Hundreds, mostly protesters, were killed when the camps were raided that day by security forces who maintain the protesters were not peaceful, were armed and that many of the country’s soldiers were killed and wounded in the raid.

Since then, several U.S. lawmakers, along with Western rights groups, have expressed concern over reported military abuses and the Egyptian authorities’ widespread arrests of Morsi sympathizers.

Muslim Brotherhood leader Mohammed el-Beltagy said from hiding Aug. 27 that accusations his group was behind acts of terrorism in the country were unfounded, and he accused Egypt’s new interim government of attempting to turn a political struggle into a security problem by blaming the Brotherhood for the surge of violence in the country.

But most Christians do not believe that and say the U.S. and the rest of the world are wrong to think otherwise.

“Show all over the world that Egypt is good now, especially the Christians,” 65-year-old retired engineer Samir Ebrahim told a Western reporter.

“This is a real revolution; the army got the right from the people, from the public, to remove the Brotherhood,” which had been trying since 2012 elections to “to take over the country,” said Ebrahim, a member of Egypt’s Coptic Orthodox Church.

Since the military takeover, Egyptian media has become almost entirely anti-Brotherhood and describes the ongoing crackdown on that group’s members and other Morsi supporters as part of its “war on terror.” One network that has not been anti-Brotherhood is Al-Jazeera, and Egyptian officials are considering banning its Egyptian affiliate.

Coptic Orthodox Pope Tawadros II and Coptic Catholic Patriarch Ibrahim Isaac Sedrak have put the support of their two communities behind the military, saying the overthrow of Morsi represents what the majority of Egypt’s Muslims and Christians want.

In late August, Patriarch Sedrak reiterated his view that “that the army and the police didn’t act against the people and that the (pro-Morsi) protests were not peaceful.”

“America has interests,” he told a television anchor in answer to her question about Washington’s position toward the recent events in Egypt.

The majority of the 82.5 million Egyptians are Sunni Muslims, and Egypt’s Al-Azhar University — Sunni Islam’s highest institute of learning — also supported the ouster of Morsi almost immediately after it happened, but has kept a low profile since.

“Traitors” Waffa Hassan said of anyone supporting what she called “the military coup” against Morsi, for whom she voted for in the 2012 elections.

Hassan, a Muslim, said she was present at the bigger of the two pro-Morsi camps with her 9-year-old son the day it was raided. She told CNS that “the protesters had weapons, and a (military) soldier threw a can of tear gas in my face as I was entering the camp, and I fell and couldn’t breathe.”

She accused the military and anyone else who said the Brotherhood was behind the violence, including the attacks on churches, of “lying.”

“Al-Azhar is a traitor, and the (Christian) church leaders are afraid because some of their people are converting to Islam,” said Hassan, who works as an administrator in a foreign news organization, but did not want to say which.

Most estimates say 10-15 percent of the Egyptian population are Christians, the majority of them Coptic Orthodox, but there are Catholics, Protestants and other various Christian communities in the country as well.

Tension between Egypt’s Christians and Muslims has been a problem on and off over the decades, but the recent attacks on churches and other Christian properties are considered the most severe in the country’s modern history.

NEXT: Western church leaders warn against intervention in Syria