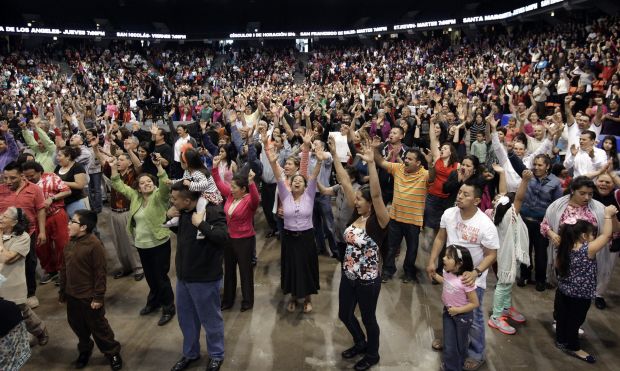 VATICAN CITY (CNS) — During World Youth Day celebrations in Rio de Janeiro, July 23-28, many worshippers in the crowds could be seen swaying from side to side, arms raised in the air, wearing rapt or joyous expressions on their faces.

Such scenes, along with on-stage appearances by celebrities such as Father Marcelo Rossi, a mega-church pastor whose records and movies regularly top the charts in his native Brazil, testified to the Catholic Charismatic Renewal’s strong influence on the church in Latin America today.

As the church continues to lose members in the region with the world’s largest Catholic population, the charismatic movement stands out as a source of hope, not only for fending off the formidable competition of Pentecostal Protestantism but for raising morale among the faithful as a whole.

Though not even half a century old, the movement claims that at least 120 million Catholics in 238 countries have been “baptized in the Holy Spirit,” according to a 2012 document published by International Catholic Charismatic Renewal Services. The movement, which started in the United States, reports fast growth in Asia and Africa. But the world’s largest concentration of charismatics today is in Latin America, where 16 percent of Catholics identify themselves as participants.

When the Louisiana native moved to Brazil in 1966, he discovered a country where, as in most of Latin America, vocations and Mass attendance rates had languished. He also learned that a recent Catholic movement to promote social justice in the region had led, in some cases, to neglect of otherworldly values.

“I felt very much a strong emphasis on liberation theology, which I say is very horizontal,” Father Dougherty told Catholic News Service in Rio. “There was a need for spirituality.”

Meanwhile, Pentecostal Protestants were enthusiastically spreading their message to great success among the traditionally Catholic population.

Pentecostals “talk about the spiritual needs of the people,” Father Dougherty said. “Often their churches, their temples, are more open than the Catholic churches,” and their pastors more willing to visit people in their homes than Catholic clergy are.

Some Pentecostal churches, especially non-denominational institutions such as Brazil’s Universal Church of the Kingdom of God, also preach the “prosperity gospel” of material well-being through faith in Jesus Christ. It was a message with obvious appeal in a country such as Brazil, where, despite recent economic growth, the per-capita gross national product is only $12,100.

The Pentecostal movement has continued to rise, from 6 percent of Brazil’s population in 1991 to 13 percent in 2010, according to a recent Pew Research Center study based on Brazilian census data. In the same period, the Catholic share of the country’s population fell from 83 percent to 65 percent. A 2006 Pew survey of Pentecostals in Brazil found that 45 percent were converts from Catholicism.

Although the Catholic charismatic renewal has strong ecumenical roots, and its members have often worshipped together with Pentecostals, it also functions as a vehicle for retaining or winning back Catholics tempted by the Protestant alternative.

Like Pentecostalism, charismatic Catholicism emphasizes the Holy Spirit, features faith healing and speaking in tongues and is spread by door-to-door evangelists. But the important roles it gives to Mary and the Eucharist ensure that charismatic devotion has a clear Catholic identity.

The movement also encourages social service, Father Dougherty said, noting that it draws its inspiration from the church’s foundational event, the first Pentecost, when Jesus’ disciples “went out to the streets” to preach and help the needy as soon as they were filled with the Holy Spirit.

Strong Catholic identity has been crucial to the movement’s acceptance by the church’s hierarchy in Latin America, many of whom had initial reservations about its unfamiliar forms of worship and largely lay leadership.

“Back at the end of the 1970s and the beginning of the 1980s, I had no time for” charismatics, the pope told reporters on the plane returning from Rio July 28. “Once, speaking about them, I said: ‘These people confuse a liturgical celebration with samba lessons!'”

“Now I regret it,” he said. “Now I think that this movement does much good for the church, overall.”

“I don’t think that the charismatic renewal movement merely prevents people from passing over to Pentecostal denominations,” Pope Francis said. “No! It is also a service to the church herself! It renews us.”

“The movements are necessary, the movements are a grace of the Spirit,” the pope added, speaking of ecclesial movements in general. “Everyone seeks his own movement, according to his own charism, where the Holy Spirit draws him or her.”