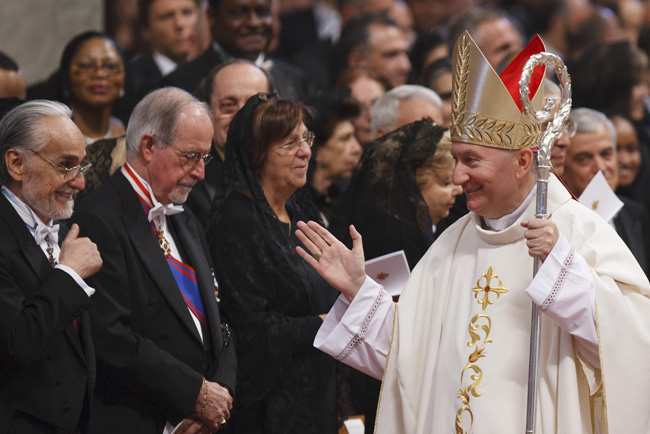 Archbishop Pietro Parolin said Pope Francis has already injected a new impetus into the Vatican’s Secretariat of State structure and given a new push for church-led diplomacy.

The archbishop, who is currently the papal nuncio to Venezuela, will start his new role Oct. 15.

In a Sept. 6 interview with the Venezuelan Catholic newspaper, Diario Catolico, Archbishop Parolin said, “The pope’s initiatives have given the secretary of state an impetus and have also created a new diplomatic momentum.”

When asked if he would be spearheading a new diplomatic offensive for peace, he noted that it was a complicated question but said, “Yes, I hope that we can recoup” that drive.

“We have this great advantage in respect to other churches, to other religions: We can count on an international institutional presence through diplomacy,” he said.

Archbishop Parolin said the Vatican has to take advantage of its vast network of papal nuncios around the world and all the contacts it has with international organizations.

“They are precious instruments that can be used to help the world,” he said.

He emphasized, however, that the Vatican’s efforts are not always publicized, but often happen quietly behind the scenes.

“We are not looking for, I believe, popularity. In all honesty, none of us wants it without an effect” that is positive.

The archbishop said the whole reason for the existence of the Vatican’s diplomatic organization “is the quest for peace.”

“If the Holy See’s diplomatic efforts have had such importance and so much consensus around the world, now and in the past, it’s due to the fact that it goes above and beyond national interests” and pushes for “a vision of the well-being of all humanity,” he said.

Archbishop Parolin, who has nearly 30 years’ diplomatic experience, said today’s geopolitical landscape has gone from a world in which nations were clearly aligned into a few cohesive “blocs” to a world of widely divergent powers, some of which have no real national identity.

Instead of an era of greater unity and cohesiveness after the fall of the Berlin Wall, “the whole problem of terrorism was unleashed,” he said.

Now the new “wall to knock down is understanding how to bring all these different powers to an agreement and work together for the well-being of everyone,” he said, where differences are turned into a source of collaboration, not division.

He said the role of the Vatican’s secretary of state is to be a focal point of objectivity and universal values in a sea of relativistic self-interests.

Because the world is so much more complex, he said the secretary of state’s role “must be to re-invent” the never-changing and universal goal of peace and human rights in varying and widely diverse contexts. “One must step away from of this plague of relativism” and harmonize differences in a new way, he said.

“If there is no objective truth in which we all recognize ourselves it will be much more difficult to find things in common,” he said.

“This common ground is the dignity of the human person in all his dimensions,” including the transcendent, the spiritual, social and political, and that all people are created in the likeness and image of God.

Nowhere is this more important right now than in the Middle East, he said in a Sept 6 interview with his hometown Catholic newspaper, “La Voce dei Berici.”

“The stability of the world is at stake, (as well as) the present and future coexistence of various religions and major ethnic groups,” he said. “Either we head toward a world where we will know how to integrate our differences and turn them into an opportunity for growth or we will head toward total war.”

“It’s not true that the world belongs to the violent, the world is, for the most part, built by good people, and we need to give them a voice” so that dialogue, peace and harmony can reign, he said.

NEXT: Christians, Muslims join Pope Francis in praying for peace in Syria