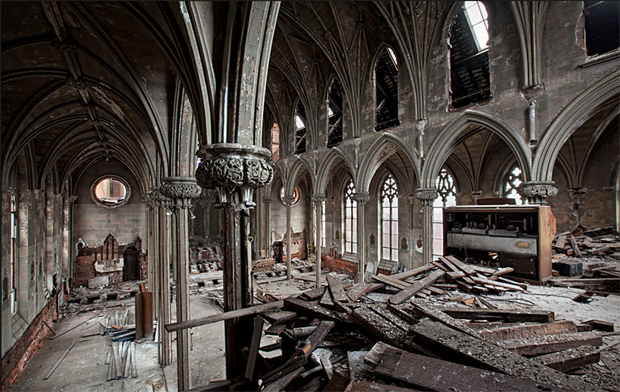 A view from the choir loft of Assumption B.V.M. Church in Philadelphia shows the nave and galleries of the church located at 11th and Spring Garden streets. Assumption Parish was founded in 1845 and closed in 1995. (Courtesy Matthew Christopher at abandonedamerica.us)

It’s part vocation and part avocation. Some of his work was exhibited at Philadelphia’s American Catholic Historical Society on Oct. 29 and he will have a reception at St. Joseph’s University on Nov. 21.

When great buildings outlast their original purpose, there are three options – repurpose them, tear them down or let them sit in slow decay until inevitably they must be demolished. It is this last category that most attracts Christopher.

“First, I would like to work toward a discussion for saving these buildings,” Christopher said. “They say it cannot be done and I say, ‘Why not?’ There are absolutely ways we can be reusing historically significant buildings and we are not looking at them.”

Secondly, he said, “If we are going to lose these buildings we should document them. A lot of people think of documentation as historical photographs. The period when the building is not being used is part of its history too, and part of the community history as well.”

Christopher was working in the mental health field when he first got the bug for photographing abandoned buildings. His first foray into the field was a night of exploring the buildings and tunnels of the huge complex of buildings and tunnels at Philadelphia State Hospital at Byberry, which have since been razed.

“Churches are the only buildings meant to be works of art with form taking precedence over function,” he said. “They are meant to inspire and speak of things that are greater than you.”

One thing that struck him at Byberry and other mental health facilities he has documented was the beauty of the buildings. “You can see they really cared about the patients when they were built,” he said.

Since then, he has documented the interiors of many abandoned factories, schools and resort hotels all over the country. One example is the Packard automobile complex in Detroit, which is reportedly the largest abandoned industrial site in North America. Another example is the federal government’s airplane graveyard in Arizona for thousands of obsolete aircraft.

But when it comes to the abandoned factories, Christopher believes the issue is tied to the outsourcing of labor to other countries with the use of child labor and unsafe working conditions.

“This is a huge discussion and the worst thing we can do is not have it,” he said.

Churches are a special category and present a special challenge, he believes. Local closed Catholic churches he visited were Transfiguration, Assumption, and Most Blessed Sacrament, all of which were beautiful and cultural treasures.

“Churches are the only buildings meant to be works of art with form taking precedence over function,” he said. “They are meant to inspire and speak of things that are greater than you. The loss of them is particularly painful.”

The problem of course is that churches, especially large churches, do not lend themselves to other uses. One rare exception, for example, is the St. Agatha complex at 38th and Spring Garden streets. Closed in 1960, it was resurrected as the Cloisters Apartments.

In any case, in Philadelphia many of the church closings are directly linked to the more utilitarian factory closings. First built were the factories which attracted workers who in the pre-automobile age tended to live near their workplace, which meant a church would be built for them. When the factories closed the people left and churches closed.

There are some reminders of the old factories that linger. For example, the huge Drueding factory in Kensington that processed leather and chamois cloth is long gone, but the private hospital that the philanthropic family built for its workers at 4th and Master streets survives as the Drueding Center – Project Rainbow, a shelter for homeless women with children.

Christopher would like to see more efforts made to save buildings that bespeak so much of the history of the community.

“These places are cultural treasures,” he said. “You can’t save them all but when you lose them you are stuck with Arby’s and Footlockers. They were built to stand the test of time and contributed to our country’s greatness.”

Matthew Christopher’s gallery presentation at St. Joseph’s University will take place in Thursday, Nov. 21 from 5 to 7 p.m. in the university’s Merion Hall. For more information on his work see his website, www.abandonedamerica.us 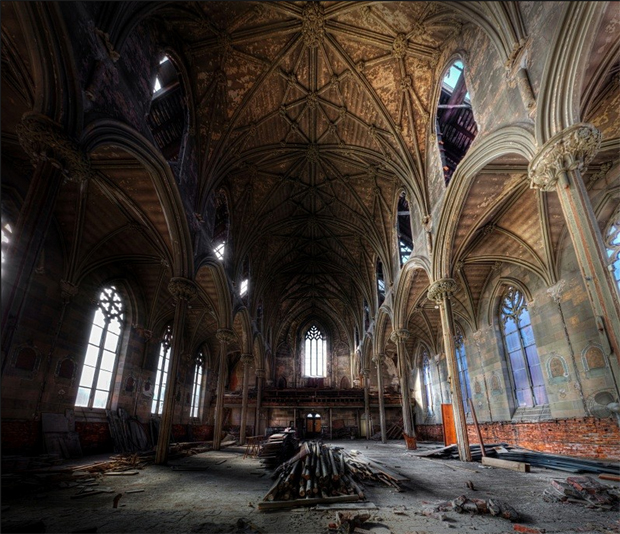 An interior view of Assumption B.V.M. Church from the front of the church toward the main doors. (Courtesy Matthew Christopher, abandonedamerica.us)

NEXT: La Salle U plans to build $35 million building for business school